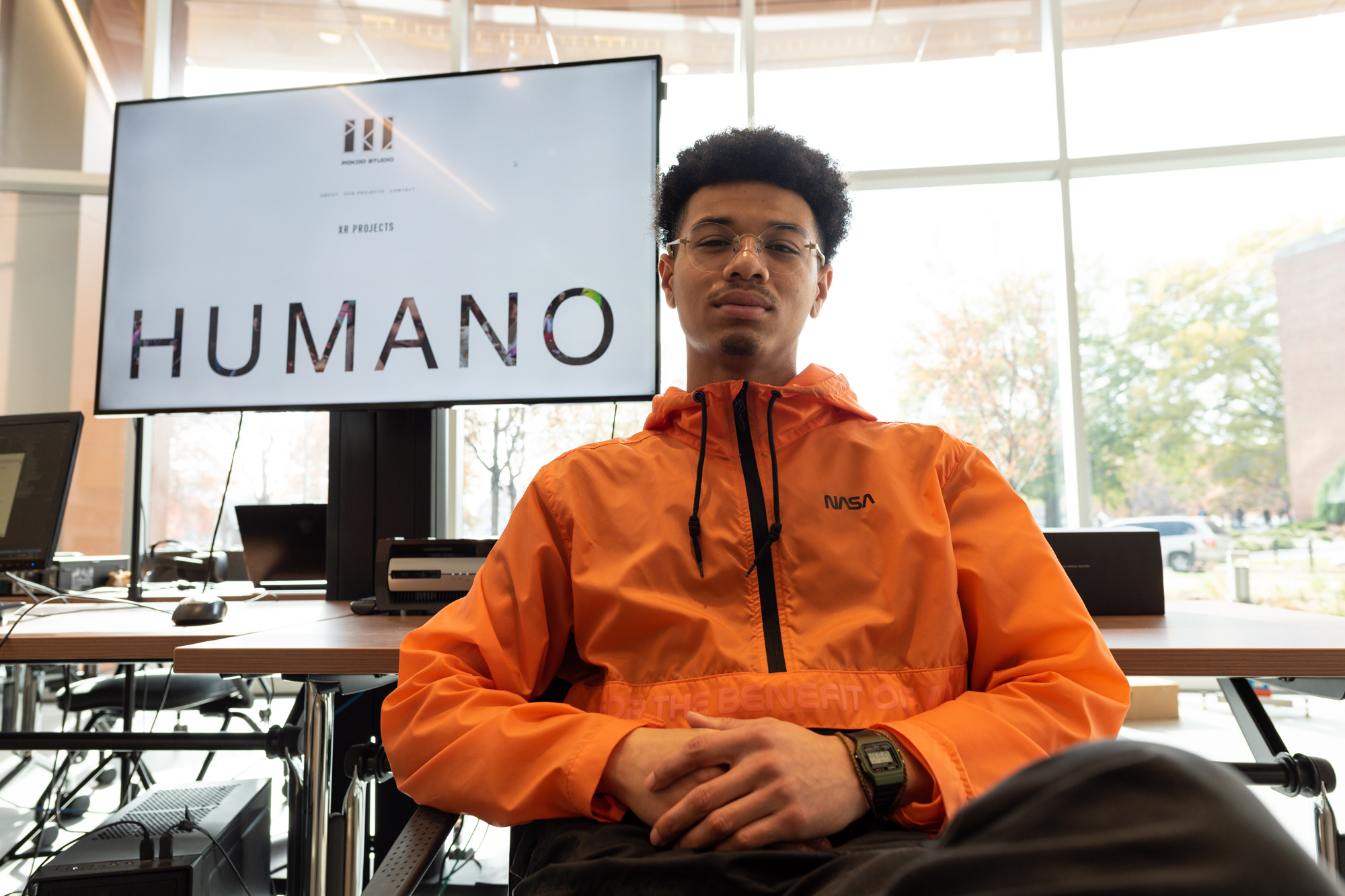 Kian Kelley-Chung, a senior English major and one of the University of Maryland students working on the Humano project, at the Brendan Iribe Center. (Matt McDonald/For The Diamondback)

Spikes of bright amber light jutted through the metal slats of the fence, silhouetting the migrants as they walked alongside the border of Mexico and the United States. A few managed to clamber on top of the barrier, where they waved at the guards on the other side.

Standing on the Mexican side of the fence, Kian Kelley-Chung and Andrew Jasiura manned cameras, recording the scene.

It was around 2 a.m. Christmas morning, but the two University of Maryland students had no plans to head home anytime soon.

For the better part of the past three years, Kelley-Chung and Jasiura have been working with a Maryland Institute College of Art graduate to shape a multidimensional experience that captures the world of migrants through virtual reality, a documentary and a photo gallery.

Through their project, which they’re calling “HUMANO,” the team is aiming to move past the headlines about illegal immigration and place viewers as close to the migrant experience as possible — helping them understand why people are leaving their homes and the perils and challenges they encounter along their journeys.

Showcasing this reality is something the team has worked toward in fits and starts over the past three years, making progress during school breaks. The documentary is starting to take shape – at least the beginning of it — and the photos are all there.

Right now, the team is aiming to release as much of HUMANO as possible before the 2020 election. They think it’s important for voters to see. Or, preferably, the world.

“I also really want the U.N. to see this as well,” Kelley-Chung said.

Moving forward, Kelley-Chung said the team is planning to start an online fundraising campaign to raise money in addition to the roughly $5,000 in funding they’ve already cobbled together from an academic scholarship and their own pockets. There are travel, research and development expenses that need to be taken care of.

Despite all of its moving parts, Kelley-Chung said, he intends to see HUMANO through. Is he worried that he’ll have to compromise on the scope of the project? Kelley-Chung interrupted before the question was finished.

Kelley-Chung attended Oakland Mills High School in Columbia, Maryland — a “super diverse” place where you could walk down the hall and hear a smattering of different languages spoken at any given time, he said. A lot of his friends and classmates were Central American, he said, which tuned him in to coverage of the United States’s southern border and immigration.

It struck him as hypocritical for the U.S. to maintain a hardline immigration policy on the border, given that immigrants were foundational to this country. It also reminded him of his friends and classmates.

“I was seeing [the U.S.] repel them and I was like, the people that you’re trying to repel are my friends,” he said.

So, Kelley-Chung started thinking about creating a video game about a migrant’s journey to the U.S. from Central America. He saw interactivity as the key to increasing empathy in players a great distance away from the border.

Then, about three years ago, Kelley-Chung met Paul Lai, a photographer who would go on to graduate from the Maryland Institute College of Art. As it turned out, Lai was interested in making a documentary on migrants from El Salvador. And it was Lai who suggested VR might work even better than a video game.

“[VR] allows you to feel that you’re not playing a game, but that you’re living an experience,” Kelley-Chung said.

Now, Lai and Kelley-Chung are co-directing HUMANO, with Jasiura devoting his time to the documentary. The project will take the viewer along four stops of the migrant journey, beginning with “La Casa” – or “home,” set in El Salvador – and ending with “La Comunidad” – or “community,” taking place in a migrant-run camp close to the northern border in Mexico that has since been closed.

While it was still open, the camp was located inside a two-story warehouse in Tijuana, Mexico and called Contra Viento y Marea — meaning “against all odds,” or, literally, “against wind and tide.” It was one of many camps close to the U.S./Mexico border, a final stop for many migrants before they attempted to go further north into America.

The intro sequence of the documentary includes footage of migrants at this camp, celebrating Christmas in near total darkness, save for the bright lights of the video crew.

Henry Church, a senior computer science major and programmer working on HUMANO, described a scene that will be included in the VR-portion of the project:

You will find yourself in a Washington, D.C., metro station. You and your fellow travelers approach the car, expecting the doors to open. But you watch as everyone climbs atop the subway car instead, and you follow after them, hoisting yourself up virtual rungs. The car lurches forward, speeding toward a tunnel exit.

In an instant, the scene changes. You’re now aboard “La Bestia” — the beast — one of the cargo trains that carry hundreds of thousands of migrants each year from Central America into Mexico. Many lose limbs or die on such trains. Others fall victim to extortion, gang violence or sexual assault.

The team eventually hopes to build an interactive narrative to play out in virtual reality, based on the stories of the many migrants they interviewed.

They have powerful material to draw from.

One man — a 20-year-old farmer who fled his home country — used a pseudonym when speaking with the HUMANO team because he feared for his life. A gang had tried to recruit him, the farmer told the students, but he’d refused. So, the gang came to his farm, he said.

There, Jasiura said, they took his belongings, beat him up and put a plastic bag on his legs. They set the bag on fire, he said, and the plastic bag melted into the farmer’s skin. Back at the camp, the farmer show them his scars.

Although the HUMANO crew was met with a warm reception by most migrants, they said this wasn’t the case for many of the Customs and Border Patrol agents manning the border.

On Christmas day last year, the HUMANO crew shot footage against the border fence along the beach. The tape shows San Diego in the distance. There’s crosstalk between the HUMANO crew, migrants and a CBP officer. Another officer, in the background, puts on a helmet and mounts his ATV before performing donuts in the sand, right up against the fence. The cameraman pulls his camera sharply to the right, and a boy along the fence reacts, grimacing, as sand is sprayed in his face.

Later, Kelley-Chung said the officer on the ATV claimed he was trying to cover up migrant footprints left over from the previous night. The HUMANO crew didn’t believe him, though — they think he meant to spray their cameras with sand.

In an emailed statement to The Diamondback, a CBP public affairs official called the team’s story “unsubstantiated” and wrote that it does not reflect the agency’s values or the conduct of the “vast majority” of employees.

“CBP does not tolerate misconduct on or off duty and holds those who violate our code of conduct accountable,” the official wrote.

But Kelley-Chung said that mistreatment by border agents is part of what migrants experience — and will not be excluded from the project.

However, despite the pain and suffering many migrants the team spoke with had experienced, they observed a common trend.

“Everybody that we talked to,” Kelley-Chung said, “had an immense sense of perseverance and hope.”