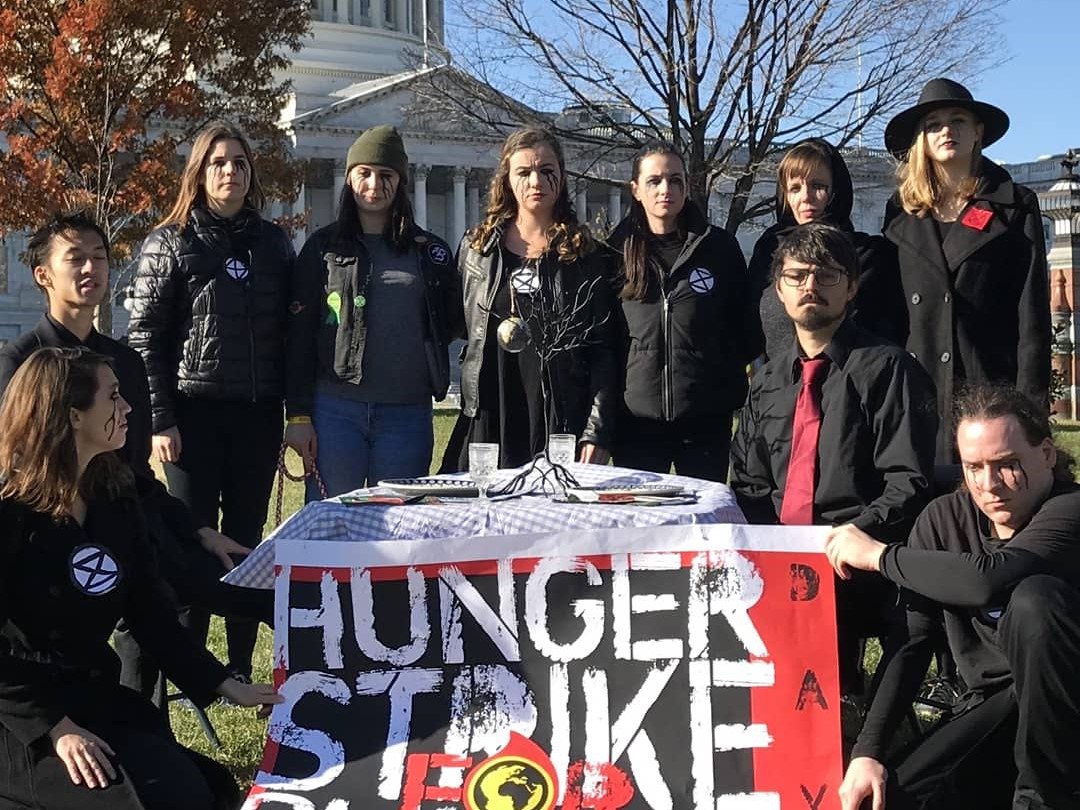 Eric Tien stares straight into the camera in a video posted to his Instagram on Nov. 25.

Unsmiling, the University of Maryland graduate gives viewers the update: It’s been eight days since he began a hunger strike to push for action on climate change, and his parents have asked him to stop.

But the 27-year-old says he feels like he can’t.

“I feel like stopping now would betray billions of people all around the world who are already suffering,” he says in the video. “So how can I stop? I must continue, as long as I can. For everybody’s sake.”

For 13 days, Tien and Stephen Leas, another graduate of this university, staged a hunger strike to protest government inaction on climate change. The pair held out through Thanksgiving until Sunday, spending four days camped outside U.S. House Speaker Nancy Pelosi’s office. And though they were unable to continue for as long as they’d hoped, their efforts garnered international attention.

“This is an extreme crisis,” Leas said. “We have to go to extremes to express that.”

[Read more: These UMD students are trying to minimize excess trash on campus]

Tien and Leas planned on ending their strike only if Pelosi agreed to meet with them — or when they could no longer continue.

By Sunday, each had lost more than 10 pounds, they said, and concerns about their health prompted them to take a break. Pelosi still hadn’t acknowledged either of them.

But the men don’t plan to ease up completely. Tien said he’s already planning on participating in another Extinction Rebellion hunger strike in the spring, and Leas plans to take part in a demonstration planned for Friday.

Tien, who graduated from this university in 2014 with a bachelor’s degree in psychology, and Leas, who completed a public policy masters program this summer, were two of over 500 people worldwide who stopped eating on Nov. 18 as part of a global climate hunger strike protesting government inaction on climate change. The movement was organized by the international environmental group Extinction Rebellion.

The plan was for the hunger strike to last seven days. Tien, Leas, and several other strikers spent the first three occupying the entrance to Pelosi’s office.

But last Thursday, when it became apparent that she was not responding to their tactics, the group decided to take action, Tien said. Together, nine strikers — Tien and Leas included — barged into the office’s staff rooms, which are not accessible to the public.

All nine were arrested on charges of unlawful entry, and they were processed and released the same day, according to an email from Eva Malecki, a spokesperson for U.S. Capitol Police.

After they were released, Tien and Leas returned to their respective homes. Sunday came, and the pair had yet to break their fast: They had made it through the week.

But to Tien, it just didn’t feel like enough.

“Our demands weren’t met and this is an emergency,” Tien wrote in a text message. “We don’t have any time to waste.”

Both men took vitamin and mineral supplements to keep their bodies functioning while they abstained from eating for six more days. Still, Leas occasionally felt faint as the days wore on, and the smell of food began to prompt “gnawingly deep” hunger pangs.

Skipping Thanksgiving dinner was especially difficult, Tien said. In one of his latest video updates, posted to Instagram on Thanksgiving, Tien cries as he lies on his back.

“I really want to quit right now,” he said between sobs.

Both men’s fast would end two days later. It was a “powerful spiritual experience,” Tien said — but he’s still not sure how effective it will prove to be.

“I’m starting to think, ‘Well, OK, our country is just not ready for this,’” Tien said. “And it will take a national disaster, a national tragedy, for people to start caring.”

In the meantime, Tien and Leas urged students at this university to get involved with climate activism. Tien said he thinks everyone should stage “massive strikes,” walking out of class until “appropriate climate action is achieved.”

In September, hundreds of students from this university joined protesters in Washington, D.C. for the global climate strike. The movement, spearheaded by Swedish teenage climate activist Greta Thunberg, encourages students to skip school on Fridays to call attention to the global climate crisis.

And last month, a group of activists organized a teach-in on the steps of the Main Administration building. The group called on the university to add a sustainability requirement to the general education program, end the direct use of fossil fuels and work to eliminate reliance on non-renewable energy.

For Tien and Leas, efforts like that aren’t just admirable — they’re necessary.