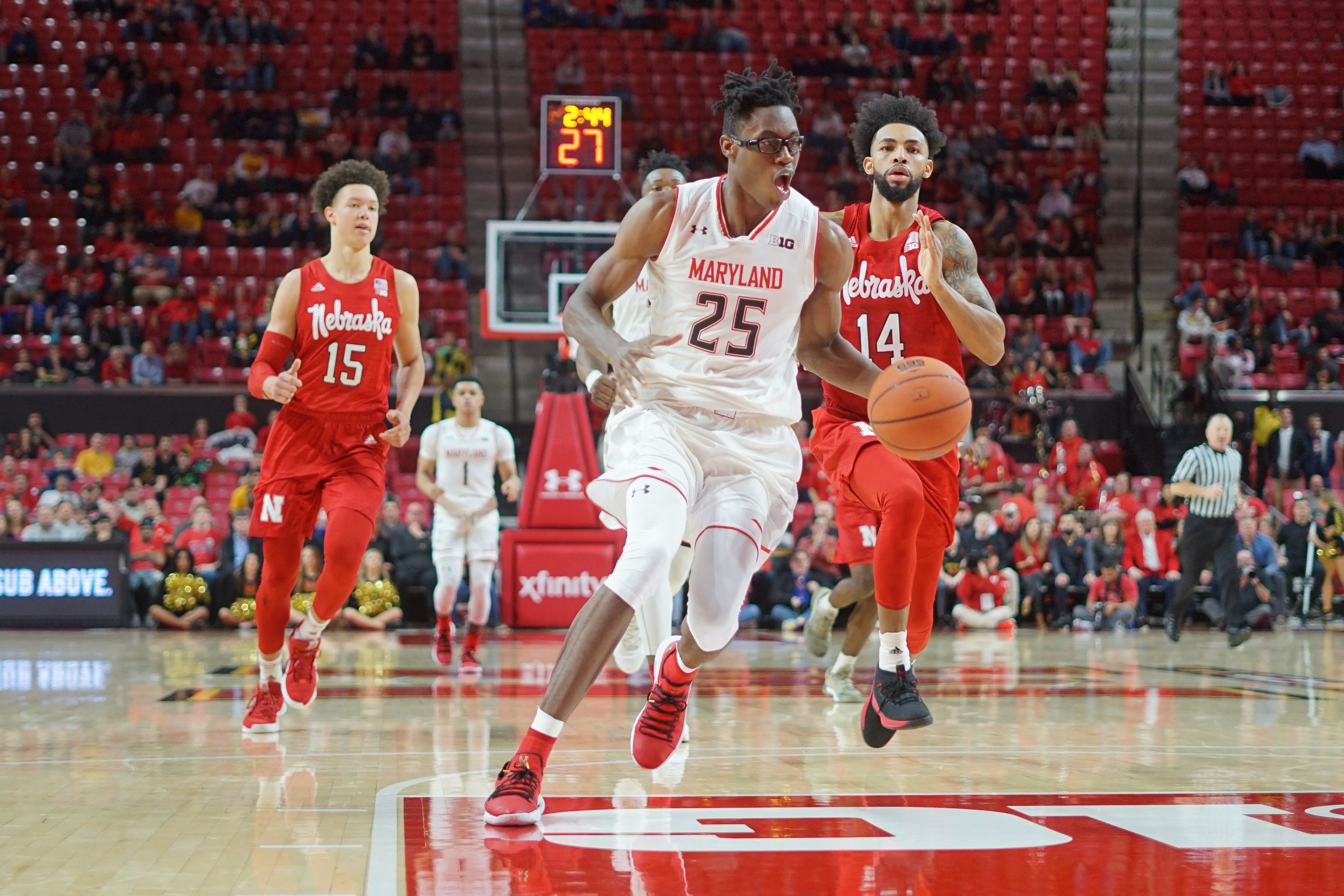 Forward Jalen Smith dribbles toward the rim on a fast break during Maryland’s 74-72 win over No. 24 Nebraska at Xfinity Center on Jan. 2, 2019. (Corey Hart/The Diamondback)

After narrowly escaping upset-minded Temple, Maryland will turn its attention to the Harvard Crimson, who knocked out Texas A&M. Ahead of the two programs’ first-ever meeting, we reached out to Henry Zhu of The Harvard Crimson to learn more about Harvard. Our conversation has been lightly edited for clarity.

Bryce Aiken has made himself known as the go-to guy for the Crimson. What makes him so lethal on offense, and how will Maryland have to gameplan against him?

Aiken struggled against Texas A&M, but he has the ability to knock down shots from anywhere on the court, especially from deep. He attacks the paint a lot less against higher-profile teams with size, but he can finish well there. He’s been improving his defense and ball distribution but is still finding his groove after minor calf injury at the start of the season.

Apart from Aiken, who are some guys to watch out for on the team?

Chris Lewis is the glue down low as a more traditional back to the basket big, but is slightly undersized at 6-foot-9. Justin Bassey is the heart and soul of the team and does all the dirty work. Plus, he’s a strong three-point shooter. Noah Kirkwood and Chris Ledlum are both good at penetrating the rim but may struggle against better opponents. Robert Baker is not shy from shooting from deep and his length is his strongest attribute.

After four straight tournament appearances from 2012-2015, Harvard has missed the last four. Do you believe that Harvard will find its way back to the tournament this year?

Penn will be tough this year, as its core is back and is a strong cohesive unit. But with Harvard hosting the Ivy League tournament this year and with everyone healthy, it should be strong favorites to make the tournament based on sheer talent and depth.

Harvard took down Texas A&M in the first round of the Orlando Invitational. What did the Crimson do well and what do they need to improve on?

Harvard moved the ball tremendously well given that A&M was clearly bigger and held up the paint. Harvard obviously needs to shoot the three better and have Aiken back to his old self, but the defense was impressive today.

Harvard will win if…

It gets a 30-plus point game from Aiken, above-average defense and one of the other pieces mentioned having a huge game.

Jalen Smith and the other bigs dominate inside, along with Anthony Cowan having another strong performance.