Anthony Cowan takes over to lead No. 5 Maryland men’s basketball past Temple, 76-69 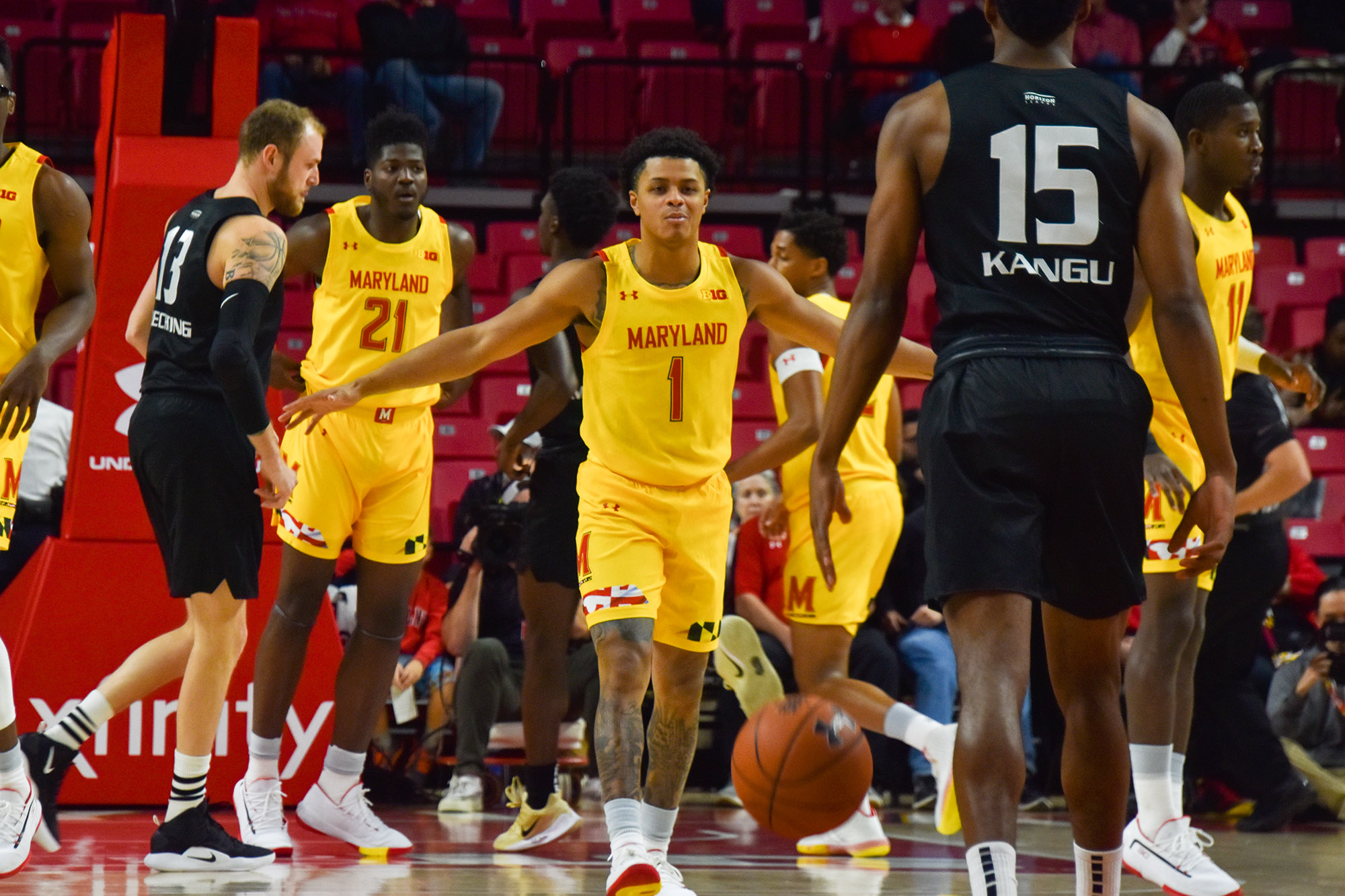 ORLANDO — Maryland men’s basketball guard Anthony Cowan knocked the ball free from forward Quinton Rose to nab a steal and ignite a transition opportunity. Cowan raced down the floor and hit a layup to extend the Terps’ lead with 12:29 to play.

When Temple called a timeout, Cowan flexed with his arms down and walked toward the bench. Maryland’s reserves surrounded their senior guard for his effort.

The huddle was fitting. The No. 5 Terps survived a slow start, long scoring droughts and a competitive Owls team with their offense centered around the senior, who finished with a career-high 30 points to lead his squad to a 76-69 victory in the first round of the Orlando Invitational on Thursday.

“[Cowan] was the focal point coming into the game,” Temple coach Aaron McKie said. “We wanted to try to pay as much attention to him as possible. We obviously didn’t do a great job with that, because he was the difference maker.”

Temple’s offense came out firing, pouring on 16 points in the first five minutes on the strength of 4-of-7 shooting from three-point range. Trailing 16-7, coach Mark Turgeon pulled out his 3-2 zone defense and a press that’s helped overcome slow starts this season.

Those two defenses rattled the Owls offense and provided a spark for Maryland. Temple incurred a five-minute scoring drought, during which it committed four turnovers. With the giveaways, the Terps began playing with more pace and used a 9-0 run to level the score at 16.

“They’re such a long and athletic team, so it’s going to affect us — [and] any team — when they’re in that zone because they close out,” Temple forward J.P. Moorman said. “We didn’t get as many open shots.”

But after that stretch, Maryland began committing turnovers of its own. Those miscues allowed the Owls to play in transition before Turgeon’s team could fall back into its zone. In the final 10 minutes, Temple scored 10 of 16 points — including a buzzer-beating layup from Alani Moore to end the first half — off Terps miscues.

Cowan helped Maryland navigate through the slow start and the prolonged scoring droughts. Despite Cowan’s 10 first-half points, the Terps trailed 34-29, largely because the guard didn’t receive much support elsewhere.

That trend continued into the second half, as Cowan scored the team’s first seven points following the break.

Secondary scorers began to emerge, though. During a rare sequence when Cowan wasn’t leading the charge, forward Jalen Smith knocked down his first 3-pointer of the season — after missing his first nine attempts — and forward Makhi Mitchell muscled his way to four straight points in the paint to give the Terps a 45-42 advantage.

“They were more concerned about Anthony than they were Jalen, and rightfully so. You look at the numbers, and [Smith] hasn’t made a three,” Turgeon said. “It was good to see him make those shots. Hopefully that’s going to be a sign of things to come for him.”

Moore, Cowan’s point guard counterpart, repeatedly had the answer for Temple. The Washington, D.C., native knocked down a 3-pointer to push the Owls back ahead, 60-57, with seven minutes to play. Moore finished with 22 points on 7-for-11 shooting, including six from deep.

The point guard duel continued as Cowan hit a layup to bring the Terps within one before the senior dished a pass to Smith in the corner for the forward’s second trey of the day, giving Maryland a 62-60 lead.

Cowan and Moore were familiar with one another. Growing up, the two paired up in the D.C. Assault backcourt in AAU.

“I knew he was going to try to go at me, just like I was going to go at him,” Cowan said. “It’s always a competitive battle between us.”

After an Owls layup leveled the score for the ninth time, Cowan ran off a screen and squared to the basket for his fourth 3-pointer, which pushed his point total to a career-high 28. And with under a minute to play, guard Eric Ayala scored seven straight points for the Terps, converting at the free-throw line, splashing from deep and driving the lane to convert a layup.

Those efforts from Ayala and others late in the second half — in a matchup that had been dominated by Cowan’s offensive performance to that point — helped spur Maryland past an upset-minded Temple team to open the Orlando Invitational.

“It was Anthony’s night to shine,” Smith said, “so we was just trying to pick up any way we could.”