No. 6 Maryland men’s basketball turns tight first half into 86-63 win over George Mason 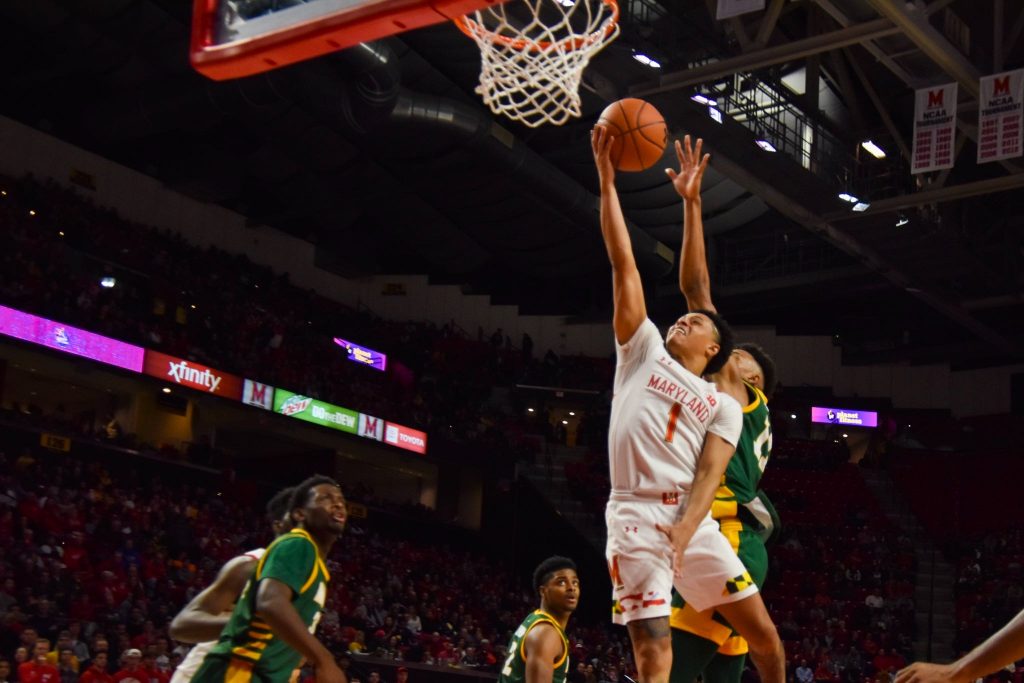 Guard Anthony Cowan goes up for a layup in Maryland basketball's 86-63 win over George Mason on Nov. 22, 2019 at Xfinity Center. (Joe Ryan/The Diamondback)

Eric Ayala streaked down the floor, right arm raised over his head with three fingers extended toward the rafters. He stared at Anthony Cowan, who just knocked down the game-tying 3-pointer and just might find his name and jersey number hanging way up there when he’s done playing basketball in College Park.

Then, one minute later, Cowan cut to the rim and finished through a foul to put Maryland men’s basketball back on top. His teammates spilled onto the floor, celebrating the latest key play from the guard, this one giving the Terps their first lead against George Mason in over eight minutes.

For about a five-minute stretch late in the opening frame, it was Cowan and Ayala who carried Maryland back into the contest. Ayala started the sequence with two free throws when Cowan remained on the bench after two early fouls. And Cowan’s free throw with 3:56 remaining before halftime capped the duo’s dominance; the pairing scored 16 straight points for the Terps.

The ball-handlers made it possible for the 19-2 run at the end of the first half to separate the two sides, a battle of previously unbeaten squads at Xfinity Center. It was No. 6 Maryland that emerged victorious, 86-63, in a game that was much tighter in the first half than that scoreline reflects.

“Those guys, they’re always really crucial for us,” guard Aaron Wiggins said. “They control the pace of the game. Them being upbeat, attacking the defense, drawing fouls, creating for other guys, it’s really important for us. They definitely kept us in the game at one point in that first half.”

For much of the first period, the Patriots used a soft press defense, slowing down the Terps’ pace. And Cowan picked up his first foul on an illegal screen, one of two straight offensive possessions that ended in a turnover four minutes into the contest. He picked up his second on a Jamal Hartwell three-point attempt and headed for the bench.

With Cowan on and off the floor, George Mason’s lead would swell to seven points. Forward AJ Wilson contributed 10 of his 19 points in the first 20 minutes, and Hartwell chipped in 13 over the course of the contest.

Against the Patriots’ defense, a lack of quick passing exacerbated issues early on.

“Guys just kept trying to dribble no matter how many times you told them in the timeout, ‘Get rid of it quick,’” coach Mark Turgeon said. “Finally, they started doing it. And that was really the difference.”

Shortly after Cowan returned with 8:46 left in the first half, Friday’s matchup began to turn in Maryland’s favor, especially once Turgeon called a timeout to chew out his squad following a layup from Wilson. Cowan made a free throw for his first point of the night, then drove through traffic for a layup less than a minute later.

Ayala checked in with a thunderous two-handed jam over Wilson but was called for a technical when he jawed with the forward. After guard Javon Greene put the Patriots back up by five, a layup from Ayala plus a triple and three-point play from Cowan secured the lead for good.

All the while, Cowan played with two fouls to his name. And despite nearly drawing a charge call late in the frame, he showed the poise needed to remain on the floor.

“I knew he could do it; he’s capable of doing anything he puts his mind to,” Wiggins said. “He was aware he had two fouls and Turg told him, ‘I don’t want you to pick up your third.’ So he played smart, didn’t reach, just played solid defense. And, I mean, it was just really big for us to have him still in the game.”

It’s been like this throughout Maryland’s young season, with slow starts giving way to comfortable victories. Against Rhode Island on Nov. 9, the Terps needed a 15-4 run to close the first half and recontrol the game, yet they still didn’t pull away completely until a few minutes into the second period.

Maryland needed to overcome a sloppy start to the final 20 minutes, but a 12-point lead heading into halftime provided a buffer until forward Donta Scott’s layup re-established a 13-point advantage.

And while the Patriots hung around, a 7-0 Terps run in a little over a minute — which included an and-1 from Cowan — ensured the upset-alert early on remained a double-digit lead the rest of the way.

“Early in the game, we wasn’t as locked-in as we was supposed to be,” Cowan said. “Just a lot of mental mistakes. And then closer to halftime, we started to really pull away.”

Wiggins finished with 15 points, including three treys. Cowan produced a team-high 16 despite turning the ball over three times, and Ayala’s eight points all came in the first half as he dealt with an illness. Forward Jalen Smith produced his third double-double of the season, with 12 points and 10 boards.

In the end, it was just another early-season double-digit win on a schedule full of them for the No. 6 team in the country. But it was far from that straightforward, needing Cowan and Ayala to combine in the first half to make the run-away victory possible.

“I thought the last 28 minutes,” Turgeon said, “we were really, really good.”