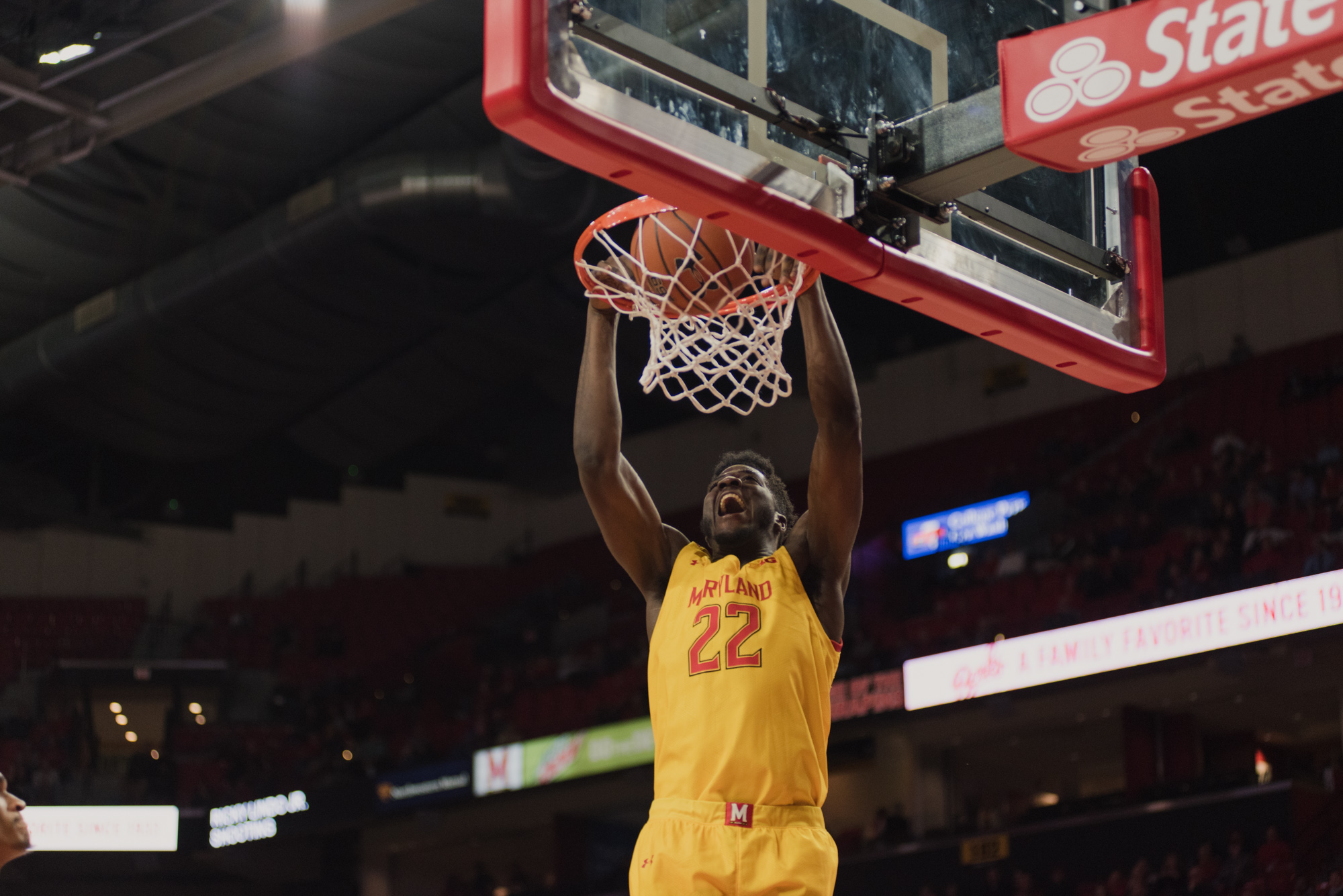 With 10 minutes to play in the first half, and Maryland men’s basketball leading 13-12, forward Makhi Mitchell worked himself too far under the basket and hit the bottom of the rim with his layup attempt, prompting coach Mark Turgeon to summon four starters off the bench and to the scorer’s table.

The three-guard lineup of Eric Ayala, Serrel Smith and Hakim Hart, anchored by forward Donta Scott and Mitchell, had failed to score in 2:43 of floor time.

But once forward Jalen Smith and guards Anthony Cowan, Darryl Morsell and Aaron Wiggins joined Ayala on the floor, the offense was revitalized. Ayala immediately hit a 3-pointer, and Morsell threw down a transition dunk after a steal to force a Fairfield timeout.

That group reeled off a 12-2 run over a four-minute stretch before Turgeon made another substitution to take control of the game. The scoring run from the more-experienced group created the separation the Terps (4-0) needed to overcome the Stags’ hot 3-point shooting and earn a 74-55 win Tuesday night at the Xfinity Center.

“Tonight was more about because I just wanted to play a lot of guys. And [I] always felt like we were going to win the game, just didn’t know by how much,” Turgeon said. “But our young guys didn’t play as well as they’ve been playing.”

As the ninth-year coach continues to determine player roles and find the right chemistry between groups for what he called the deepest team he’s coached, Turgeon has used these nonconference tune-up games to experiment.

Turgeon implemented his third different starting lineup in four games, opting for Scott instead of Mitchell — who had incurred early foul trouble in both of his starts.

Scott’s stay on the court with the starters was short-lived, giving way to forward Ricky Lindo after three minutes because of lapses in fundamentals that Turgeon noticed.

Lindo, whose playing time has been more sparse than expected, scored a career-high 13 points and finished with seven rebounds.

“When I realized my role and what I’m really good at, it just really looked good tonight,” Lindo said.

Hart entered Tuesday’s game coming off a seven-point, three-assist performance against Oakland on Saturday and made his case in the race for the sixth guard spot in the rotation. Turgeon inserted Hart into the game at the 12:44 mark of the first half, the earliest the freshman has appeared this season.

“Hakim’s really coming on,” Turgeon said. “The more we play him, the more he kind of shines. … When you see guys getting better [and] they can help the team, it’s fun.”

After the 12-2 run helped them claim control of the game, the Terps’ lead continued to balloon. And Turgeon dug further into his bench, calling Makhel Mitchell’s name — the 11th player to appear in the first 15 minutes.

Fairfield stayed competitive largely because of its three-point marksmanship. The Stags knocked down 7-of-11 first-half attempts and scored 21 of their 27 points from beyond the arc.

“I think we guarded well. I think we played great defense,” Ayala said. “They was throwing up some last-second shot clock shots, and stuff like that, so I think we definitely guarded well. Kudos to them, though, they made some tough shots.”

Despite Fairfield’s efficiency from deep, the Terps built a 41-27 lead with their balanced offensive output that featured nine two-point shots, five 3-pointers and eight free throws.

Turgeon continued to shuffle players in-and-out of the lineup in the second half, and the Stags continued to torment the Maryland defense with their three-point proficiency.

Cowan knocked down a shot from the outside to give the Terps a 55-43 lead with 12 minutes to play. But out of a timeout, Fairfield responded with a set play to free up guard Calvin Whipple for the answer from the outside.

Maryland relied on the second-half production of two bench players to maintain separation in the wake of the Stags’ shooting. Ayala and Lindo both chipped in seven second-half points.

“Just being ready to play,” Ayala said about carving out roles on the team. “With us being so deep, constantly working on your game and just being prepared whenever your number is called, and just go out there and produce.”

With George Mason coming to College Park on Friday, and a three-game tournament in Orlando on the horizon, the Terps will encounter a step up in competition. In those games, Turgeon won’t have the same opportunity to toy with rotations without risking an upset loss.

“That’s over,” Turgeon said. “Guys gotta be more consistent for me, but we’ll start playing for keeps now.”