Early in his Maryland basketball career, Makhi Mitchell is still learning how not to foul 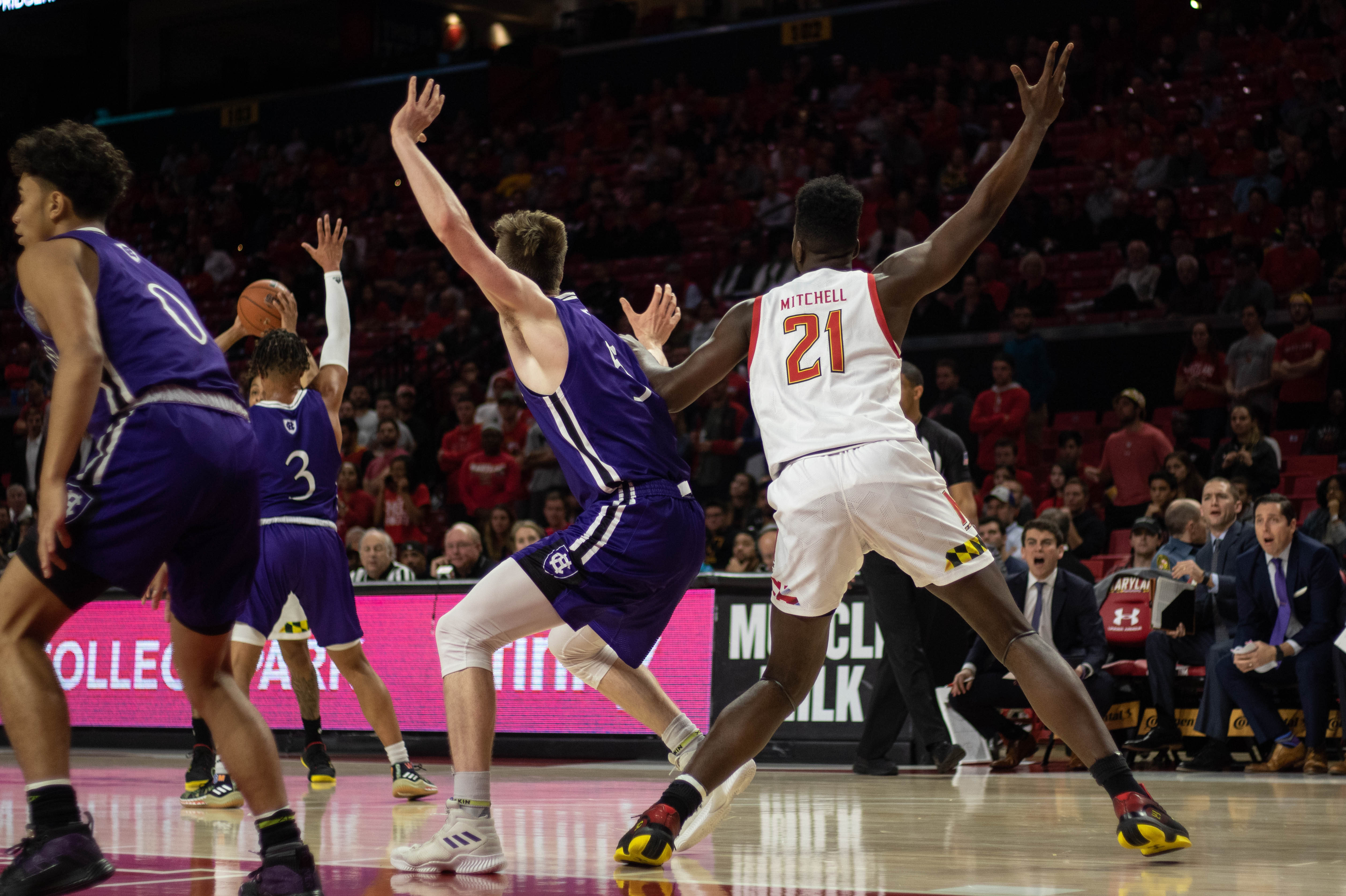 Oakland center Brad Brechting posted up near the block on the Golden Grizzlies’ second possession Saturday, holding off Makhi Mitchell. The former four-star forward — who had found his way into Maryland men’s basketball’s starting lineup — lunged to knock the ball away, pushing Brechting in the process. He threw his head back in frustration at the early foul call.

And on Oakland’s next trip down the floor, Mitchell quickly closed on forward Daniel Oladapo’s floater in the lane, only to smack his arm and hear the whistle again. This time, coach Mark Turgeon walked down the sideline and pointed for Mitchell’s twin, Makhel, to enter the contest.

“His first foul, he was trying to do the right thing,” Turgeon said. “His second foul was silly.”

There’s a fine line between aggression and foolhardiness on the court, and Mitchell crossed it within the first two minutes Saturday. Last week against Rhode Island, it took him under three.

And three games into Mitchell’s freshman season, Turgeon doesn’t know when things will click for the forward. The first hurdle will be to stop fouling in practice. Then comes limiting those miscues in games. But until then, the coach expects incremental improvement across the board from Mitchell and is turning early season struggles into a learning process.

“It’s a lot of things with him — the game is moving way too fast, he’s super excited because he has been starting and he’s got some really bad habits that he needs to break,” Turgeon said. “Is it going to happen overnight? Probably not. But I do know he wants to play, so he’ll figure it out.”

At this point in the year, mistakes are manageable and steep learning curves are expected. With more experienced teammates carrying much of the load against outmatched opponents, Mitchell’s two early fouls can be forgotten.

Turgeon noticed how Makhel and Makhi Mitchell made gaffes against Oakland. But they weren’t costly in the 80-50 victory, and the twins learned from them during film review after the game.

With the depth Maryland has in the frontcourt this year — Jalen Smith, Donta Scott, Ricky Lindo and the Mitchells — the pressure isn’t on the twins quite yet, which offers Turgeon some flexibility in how he uses them.

“The thing for me right now, two of them make one body,” Turgeon said. “We were going to sub a certain way and Makhi picks up a couple fouls. All right, Makhel goes and gets him. Makhel screws up, boom, Makhi can go get him. Pretty soon, they’ll become two different guys. But for me right now, they’re just one guy. Their games are so similar.”

Makhi Mitchell featured for 16 minutes in Maryland’s exhibition game against Fayetteville State, pulling in eight boards and scoring four points. He scored six points despite playing for only eight minutes in the season opener against Holy Cross, hampered by two fouls.

His fouling hasn’t stopped, despite breaking into the starting rotation for the past two games. He recorded four personals in four minutes of action in a win over Rhode Island before Saturday’s three in seven minutes against Oakland — although Turgeon felt the third was understandable, closing down forward Xavier Hill-Mais at the three-point line.

After Makhi Mitchell’s first foul, guard Darryl Morsell walked over to high-five him. After his second, guard Aaron Wiggins patted him on the chest before he headed for the bench.

“We talk to him all the time, try to keep his head up. But he has a great head on his shoulders,” Morsell said. “It’s a learning process. He’s still learning, he’s still asking questions.”

It’s an adjustment Mitchell’s teammates expect him to make, although Turgeon estimated it could yet be another four weeks before the unnecessary fouling fully stops.

This is the time of year for it, though. As Fairfield comes to Xfinity Center on Tuesday — one of two warm-up opponents this week — Mitchell will have another shot to develop in a low-leverage situation.

“He’s one of the smartest big men I’ve ever played with, you know, he’s very intelligent. I call him a point forward,” guard Eric Ayala said. “Just him getting knowledge of the game, it’ll slow down for him, and he’ll know when to pick his spots to be physical or not.”