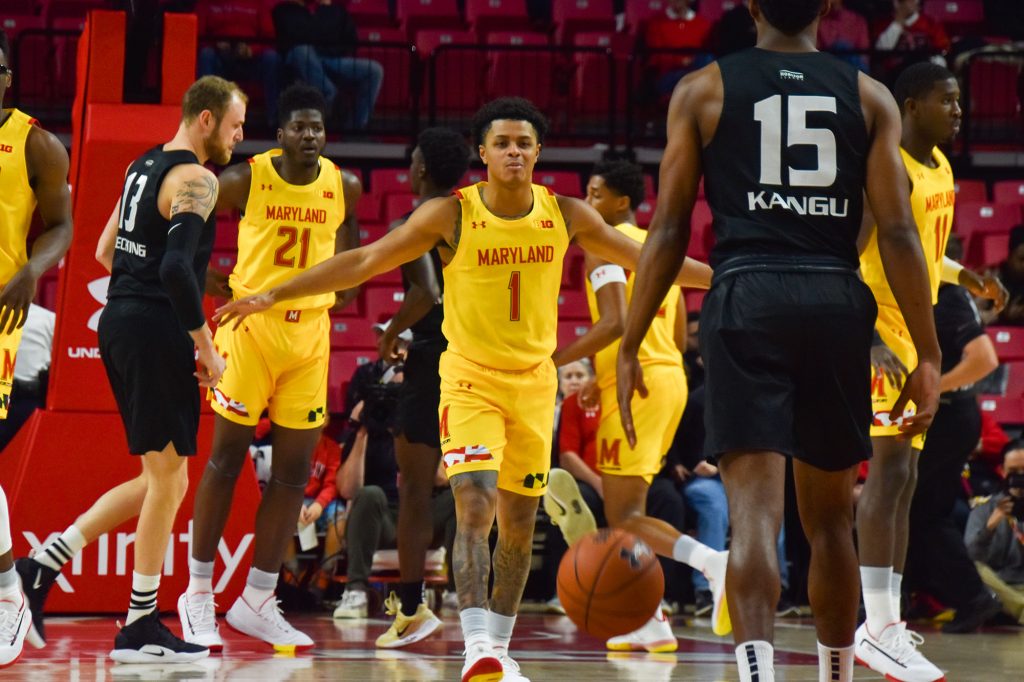 When Oakland guard Kevin Kangu received the inbounds pass following the under-16 timeout in the second half Saturday, his indecision was plain to see. As soon as Kangu attempted to get up the court, Maryland men’s basketball guard Anthony Cowan met him. Then forward Donta Scott joined in, forcing a pass to Golden Grizzlies guard Blake Lampman in the backcourt.

But when Lampman finally separated from guard Eric Ayala, the whistles blew. The Terps pulled out a run-and-jump full-court defense for the first time this season, and after they forced a 10-second violation on the first possession, guard Darryl Morsell jumped and threw both arms into the air, Cowan and Ayala high-fived and Scott clapped.

For an eight-minute span in the second half of Maryland’s 80-50 win, the new press defense bamboozled Oakland. And if the Terps had faced that defense before coach Mark Turgeon introduced it this week, their offense may have been stifled in a similar way.

Turgeon’s newest addition to Maryland’s defensive arsenal proved mightily effective, picking up the pace of the game and forcing turnovers — and converting them into points — as soon as he initiated a variation of former North Carolina coach Dean Smith’s signature trapping scheme.

“We literally just put it in yesterday,” guard Aaron Wiggins said. “And we walked through it. [Turgeon] wasn’t planning on using it today, but he trusted us, and he knew that we were capable of bringing it out and being able to make a difference.”

The Terps first pulled out a press in their exhibition game against Fayetteville State on Nov. 1, counteracting their pace with a zone scheme that slowed down the Broncos and helped create easy buckets — a steal and score for Cowan, a transition lay-in for Morsell.

Adding in extra press defenses has been on Turgeon’s mind for some time. After seeing the success in that preseason matchup, the ninth-year coach said he would begin to work in some presses meant to speed up a game. His team showed off one Saturday, despite little preparation.

“We put a press in this week, they hadn’t seen it,” Turgeon said. “It worked for us. Guys were good in it. Got the game going a little bit better.”

The run-and-jump press proved pivotal in turning Saturday’s second half into what Morsell called a “track meet.” After forcing the 10-second violation, the Golden Grizzlies tried to break the press with a quick pass to forward Xavier Hill-Mais. In space and with forward Jalen Smith between him and the basket, the redshirt senior attempted to go up strong.

The 6-foot-10-inch Smith blocked him — one of his three that day — to trigger a fast break. On Oakland’s next inbounds pass, Scott and Ayala trapped forward Daniel Oladapo in the corner. Morsell picked off the ensuing feed and faked a behind-the-back pass before finishing at the rim himself, part of a 9-0 Terps run.

“Our defense is one of our strong points,” Morsell said. “In the first half, the game was kind of slow. We switched up in the second half, kind of did a run and jump, and I feel like that picked up the pace of the game.”

Maryland racked up 10 steals Saturday — its most since a 104-67 win over Marshall last year — with Wiggins collecting three for the third straight game. And with a deep bench — nine players featured for 11 or more minutes — a high-energy defense such as the run and jump is manageable.

The Terps won’t need to use a press defense every game, particularly in early-season matchups they’ll likely be in control of throughout. But as the season progresses and opponents improve, Maryland can make use of the presses it’s perfecting now to impact tighter contests.