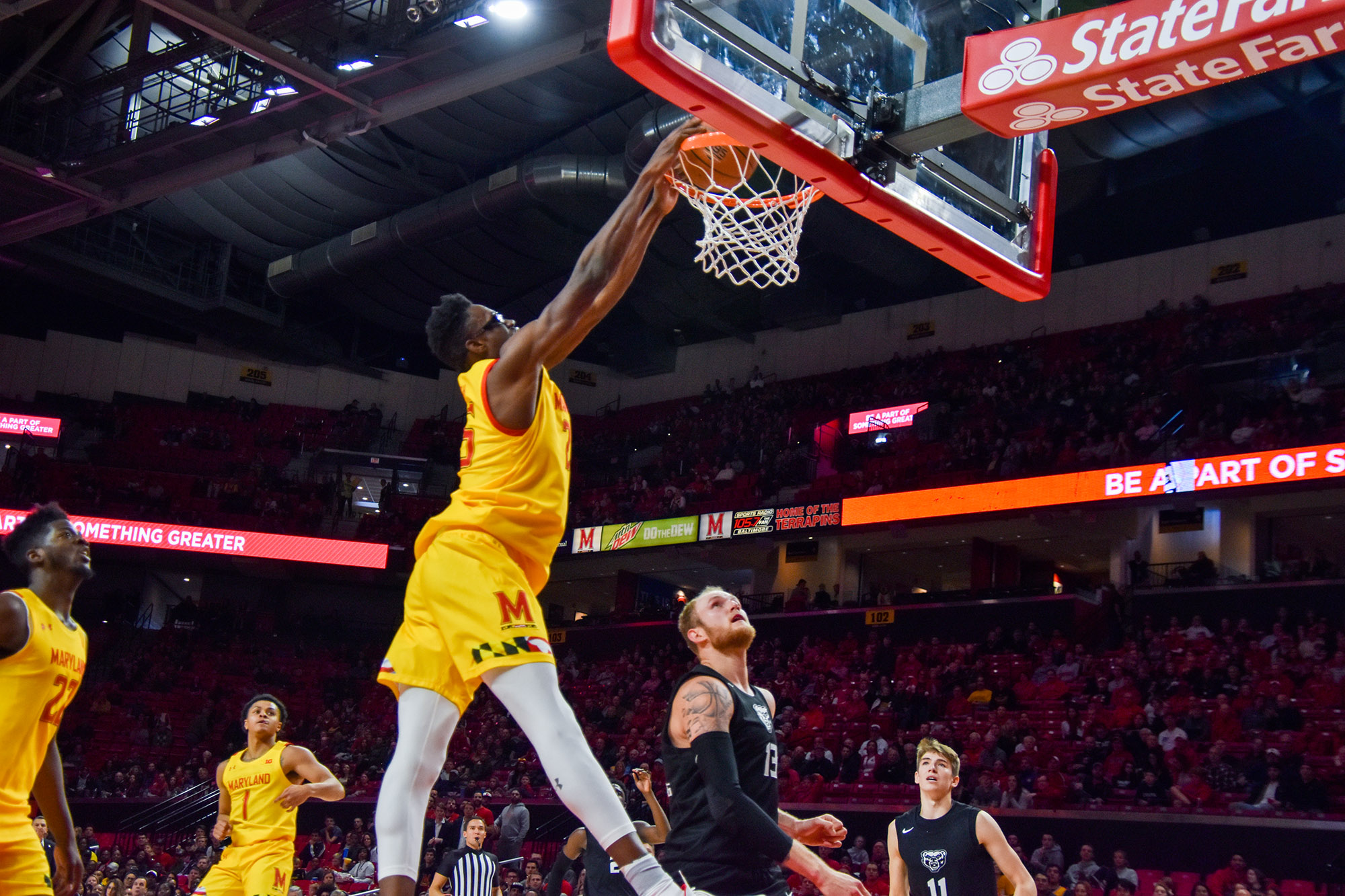 It started with Donta Scott’s 3-pointer from the corner midway through the first half and ended with Aaron Wiggins’ trey from the other side of the floor as the buzzer sounded.

The bookend threes, some 10 minutes apart, turned Maryland men’s basketball’s narrow deficit into a comfortable lead. They were the beginning and end of a 23-6 run late in the opening period, a stretch that helped the Terps overcome the early turnovers that allowed Oakland to remain close.

In short, it looked like the No. 7 team in the country imposing its will at home against a scrappy but inferior opponent. These are the kind of displays Maryland can get used to this year, particularly with a lofty ranking beside its name.

So long as the Terps manage runs like those — facilitated through dogged defense and fast-paced offense — early-season tests should play out like Saturday’s did. Maryland burst past the Golden Grizzlies, 80-50, leaving any concern in the rear-view mirror en route to a dominant win.

“Sometimes when you get the No. 7 in front of your name and you haven’t quite earned it, you think you’re supposed to beat everybody by 25 in each half,” coach Mark Turgeon said. “That’s not the case in college basketball.”

To that point, Oakland had asserted its size down low — when so many teams opt for speed over bulk, the Grizzlies started four players 6-foot-5 and taller. But with Maryland boasting size, too — the tallest team in the Big Ten — Turgeon opted to match up with Oakland’s length by putting out his own big lineup, starting forward Makhi Mitchell for the second straight game.

It had taken about three minutes against Rhode Island for Mitchell to pick up two fouls. He beat that on Saturday, heading to the bench less than two minutes into Saturday’s outing with two personals to his name.

“Makhi fouls in practice,” Turgeon said. “If he stops fouling in practice, it usually takes two or three weeks to carry over to a game. So we’ll see. I know he wants to play.”

While guard Anthony Cowan splashed from deep to establish a five-point lead just a minute later, the Golden Grizzlies took advantage of three straight Terps turnovers — part of nine first-half giveaways — to narrow the game and force Turgeon to make wholesale changes at the 15-minute mark, getting guard Eric Ayala into the game.

Scott’s triple at the 10:02 mark in the first half signaled the start of Maryland’s improvement. The Terps turned the ball over just once in the final eight minutes of the half.

“We just played a little bit more composed in the second half,” Wiggins said, “played like the team we knew we were.”

And while center Brad Brechting had scored a joint team-high six points in the opening 20 minutes, his decision to take on forward Jalen Smith with under a minute to go before intermission proved costly.

Smith stuffed him, corralled the rebound and dished to Cowan — who finished with 11 points and seven assists. The Mount St. Joseph’s grad continued to run the floor, and Cowan found him streaking through the paint for an alley-oop that brought the Xfinity Center crowd to its feet.

Those fans would have reason to get loud once more about 30 seconds later, when Cowan found Wiggins in the corner for his 3-pointer as time expired on Maryland’s 11-0 run. Maryland’s 35-22 lead would only expand in the second half, especially as guard Darryl Morsell piled on 12 points in the final 20 minutes on 5-for-6 shooting.

“Darryl put a lot of work in,” forward Makhel Mitchell said. “It wasn’t surprising. It felt good, everybody was happy for him and riled up on the bench.”

Oakland wanted to slow the contest down to get Maryland into a half-court offense. But when Morsell and his teammates began to pick up the pace, particularly in the second half, the Terps ran away with it. They posted 30 fast-break points and three players finished in double figures.

“I’m an athlete. I like to run. I like to get up and down,” Morsell said. “Kinda told the guys at halftime, ‘We’ve got a lot of athletes on this team. Let’s make this a track meet.’”

And against Oakland’s interior size, the Terps began splashing from deep with the first signs of regularity this season. They finished 8-for-26 from three-point range. Guard Reese Mona entered and knocked down a trey and a long 2-pointer. And the once-close game had slipped away, long forgotten.

With a top-10 ranking and expectations that lead the mind to March, these early season matchups can become traps. But Maryland’s 23-6 run to end the first half proved the difference, displaying — at least through three games — that this squad can weather a storm.

“We love the pressure of being the No. 7 team in the country,” Morsell said. “We just embrace it. We know we’re talented, but it’s just about execution and just coming ready to play every single day.”