No. 7 Maryland men’s basketball pulls away in second half to top Rhode Island, 73-55 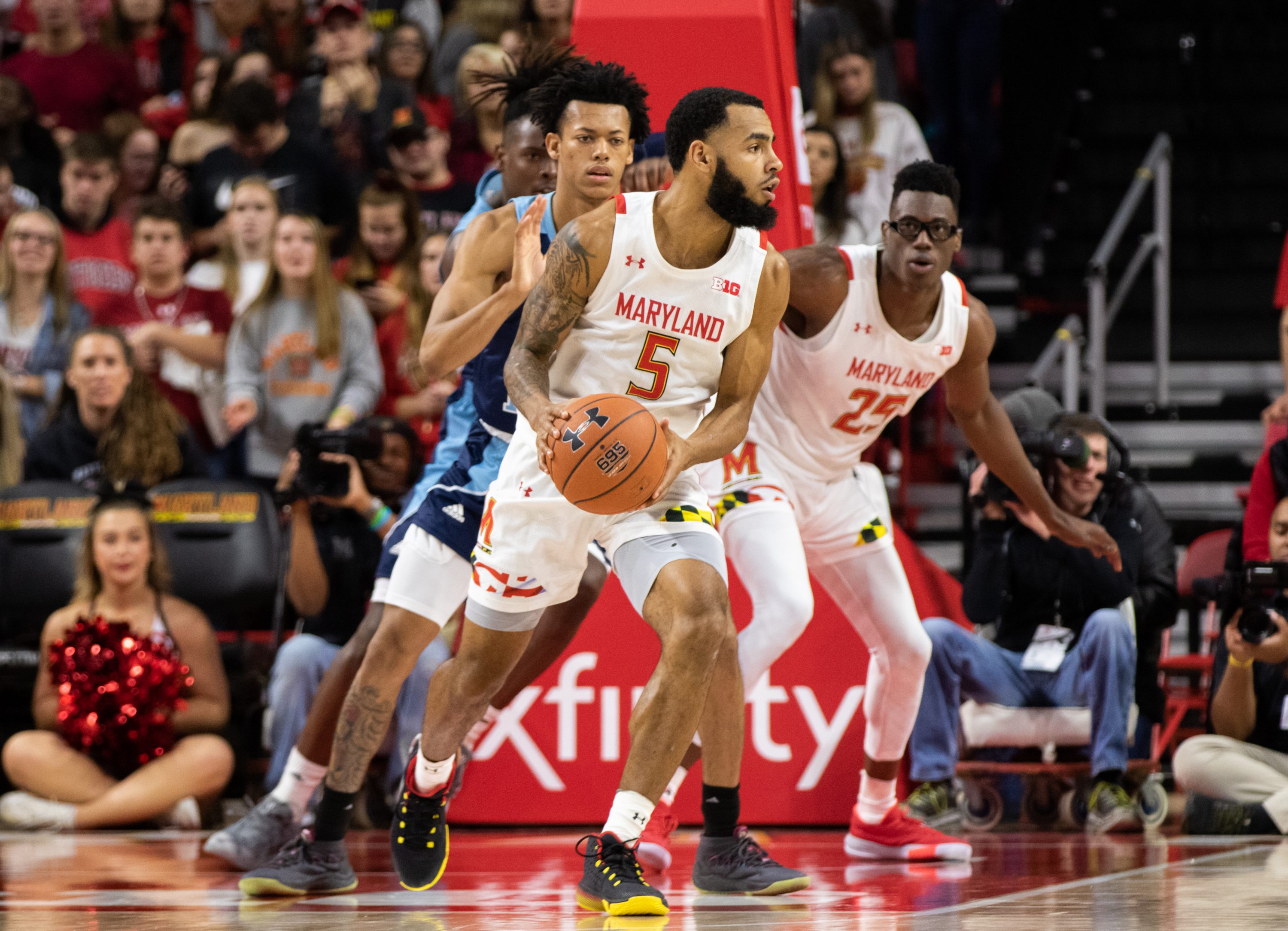 The Xfinity Center crowd pounced on any opportunity to exclaim in the first 15 minutes of No. 7 Maryland men’s basketball’s Saturday night matchup with Rhode Island.

But between those intermittent bouts of excitement, coach Mark Turgeon was often the one reacting so strongly. The ninth-year coach repeatedly showed his frustration as the Terps turned the ball over 13 times and fell behind 28-20.

A layup from forward Jalen Smith got the crowd reengaged, before the Maryland faithful became full-throated as the Terps reeled off a 15-4 run to close the first half. The first-half run helped the home team capture momentum and overcome a tumultuous start to win, 73-55.

“We needed it,” Turgeon said. “I think we all felt relieved, then we knew we were going to win the game, it was just by how much.”

Rhode Island’s game plan was clear from the outset: Be physical. The Rams weren’t intimidated by the highly ranked Terps and their size.

On its first two possessions, Rhode Island corralled an offensive rebound and capitalized with a second-chance 3-point shot and a put-back layup, prompting Turgeon to yell from the sideline “Rebound!”

When the Terps’ defense lost a player underneath and allowed a wide-open layup over eight minutes into the game, a furious Turgeon turned to the bench and yelled demonstratively.

“We got their best shot out of the gate,” said Aaron Wiggins, who recorded his first career double-double with 13 points and 13 rebounds. “They went up 10, 12 points on us, and because of our experience we were able to stay calm.”

But the turnover problems persisted, and the number of miscues easily surpassed the eight that Maryland committed in 40 minutes during Tuesday’s season opener against Holy Cross.

“Probably just going too fast,” guard Anthony Cowan said. “In the first half, we really wasn’t running anything, wasn’t executing anything like we’re supposed to.”

To address the ball-handling issues, and combat Rhode Island’s physical style, Turgeon countered with a four-guard lineup, putting guard Darryl Morsell at the power forward spot with 4:34 left in the half. During a two-minute span with the perimeter-oriented lineup, the Terps quickly scored five points to cut their deficit to 28-27.

“We was able to get stops, really spread the floor and really run,” Cowan said. “I really liked our five when Darryl was at the four. He got aggressive on defense, and like I said, we was able to run in transition.”

Following a media timeout, Turgeon substituted out one of the guards in favor of forward Donta Scott. The freshman hit a 3-point shot from the wing to give Maryland its first lead of the night that it extended to 35-32 heading into halftime.

The Rams tied the game early in the second half with guard Tyrese Martin’s 3-pointer. But Maryland didn’t allow that shot to overtake the momentum it had built.

Cowan — who finished with 14 points, all in the second half — knocked down a shot from distance to cap off a 13-4 run that gave the Terps a 48-39 advantage.

“I’m just glad he likes to bring us home,” Turgeon said of his senior guard. “I’d much rather have that than a guy who plays good in the first half, then can’t do it in the second.”

Maryland’s lead ballooned to 21 with Smith pouring in 10 straight points in a three-minute span to bring his total to a game-high 19 points, to go with 11 rebounds.

After the sloppy first 15 minutes, the Terps scored 53 points and committed just four turnovers in the final 25. As Maryland’s level of play steadily elevated, Turgeon’s sideline demeanor slipped into a much more relaxed state as the home team coasted to the victory.

But while Turgeon and the team enjoyed what ended up being a comfortable margin of victory, the Terps know their top-10 ranking places a target squarely on their backs.

“Out of the gate, it’s just a matter of us making sure that we’re locked in on details,” Wiggins said. “Knowing the scouting report, knowing what they’re going to throw at us and being prepared to bounce back from it.”