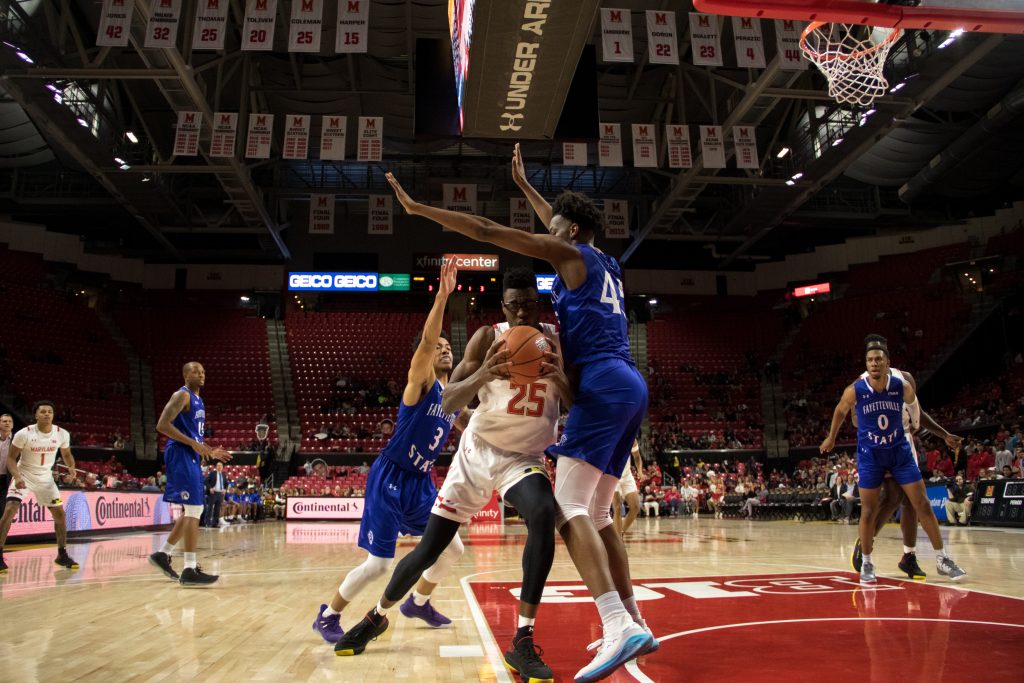 Even then, as the tears welled up in his eyes and began to roll down his cheeks, Jalen Smith was no quitter.

He hated losing, so he cried. And when facing his father at his local recreational center gym, losing came often, an expected outcome for an elementary schooler facing someone twice his height in 1-on-1 basketball. But he’d soon dry those eyes and return to the floor, ready for another go, hoping for a different result.

Smith says he’s changed; he’s no longer a “cry baby” and he certainly doesn’t lose at the rate he once did when facing his father. But that hatred of losing — that’s something he’ll never shake. It’s ingrained in him, an aversion so powerful he tries to avoid it all costs — no matter if he’s at the rec center or inside Xfinity Center — and sometimes those feelings still sneak up on him.

So when the tears welled up in his eyes and began to roll down his cheeks at VyStar Veterans Memorial Arena in Jacksonville and his teammates had to partially carry Smith from the court so he couldn’t line up and insist on a rematch, it was Smith at his purest. It was the 6-foot-10 forward proving, despite playing on a much larger stage, that his hatred of losing has never left.

That 69-67 season-ending loss to LSU in the NCAA tournament, sealed by a last-second layup from guard Tremont Waters, has festered within Smith all offseason. He hasn’t shied away from it, either. Smith — now a sophomore and predicted to become one of the best big men in the country — drinks in replays, thinks about what could have been and plots for how this season can end differently.

It’s been as much fuel as heartache for Smith.

“The next day I was in the gym,” Smith said. “That fire is there now. Everybody knows nobody wants to lose in the NCAA tournament again.”

Long before arriving in College Park, Smith’s potential was evident. He was tall and athletic, two must-haves in basketball. But Mount Saint Joseph High School coach Pat Clatchey recalled a unique combination of timing and touch, going up for rebounds well and shooting jumpers proficiently.

And then there was that play way back when Smith was a mystery to Clatchey, an incoming high school freshman who stood out for his height at a summer camp but was otherwise unknown.

During a 3-on-3 competition at the Gaels’ camp, Smith stood on the right wing before cutting left into the lane, taking two dribbles toward the rim, rising up and slamming home with his left hand. Clatchey and longtime assistant coach Doug Nicolas were left gaping.

“Coach,” Nicolas said to Clatchey, “that might be our first McDonald’s All-American.”

He was right. Yet as Smith’s ability turned into more consistent success — a five-star recruiting ranking, averaging 23 points per game, 12.5 rebounds and three blocks as a senior at Mount Saint Joseph — the forward remained the quiet character he always had been.

He watched guard Darryl Morsell, his teammate at Mount Saint Joseph and now Maryland, announce his commitment to coach Mark Turgeon in College Park. Smith saw Morsell unveil a picture of himself in a Terps uniform and place a Maryland hat on his head in a room full of people.

When it was Smith’s turn to commit to Maryland, Clatchey asked if he would like a similar announcement. Smith opted to tweet the news, preferring a low-key approach.

“I saw all the people there, and everybody trying to hug up on you,” Smith said. “I didn’t want that.”

But as one of the top recruits in the nation, attention would find him anyway. Smith had early season success last year — 19 points in his debut against Delaware, and 21 in a Big Ten win over Minnesota. But there were consistency concerns, questions about his physicality and a spotlight that always finds the two-time Maryland Gatorade Player of the Year.

Perhaps his nadir came in a return to Baltimore, a 12-minute, one-point performance against Loyola-Chicago at Royal Farms Arena. After that display, he called his parents. He told them he played poorly.

“Yeah, you did,” he recalled them saying. “But it’s all behind you now. Just move on to the next one.”

Smith did with his first 20-point game three nights later in a blowout win over Loyola Maryland. There were more ups than downs in that first season — Clatchey pointed to a floater Smith scored late in the year as a sign he can produce in multiple ways — but there were moments that showed Smith still had room to grow.

“Now, it’s really just a level of consistency,” Clatchey said in March. “What he’s displayed, from a versatility standpoint — running the floor, blocking shots, stretching the defense — he definitely displays the ability of being an NBA player.”

Smith’s NCAA tournament performance perhaps solidified that view, averaging 17 points, 10 rebounds and three blocked shots in Maryland’s win against Belmont and loss to LSU. But in hindsight, Smith said the decision to return for his sophomore year was straightforward.

He called his parents after that loss against LSU, still shaken up about what transpired on the floor.

“We talked about that leaving a bad taste in my mouth,” Smith said, “and me not wanting to leave Maryland on a loss.”

And they all agreed there were still areas he needed to improve in. He’s gained weight — Turgeon said Smith is up 35 pounds from where he was when first arriving on campus — and has worked on his perimeter defense.

But so much of this offseason’s work goes back to Waters’ last-second layup, rewatching the highs-and-lows of the last five minutes of the matchup with the Tigers and remembering the feeling as he left the floor as forward Bruno Fernando propped him upright.

It could be that elementary schooler still inside him, though, the one who hated losing so much he’d return to the floor for a rematch even as the tears dried upon his cheeks.