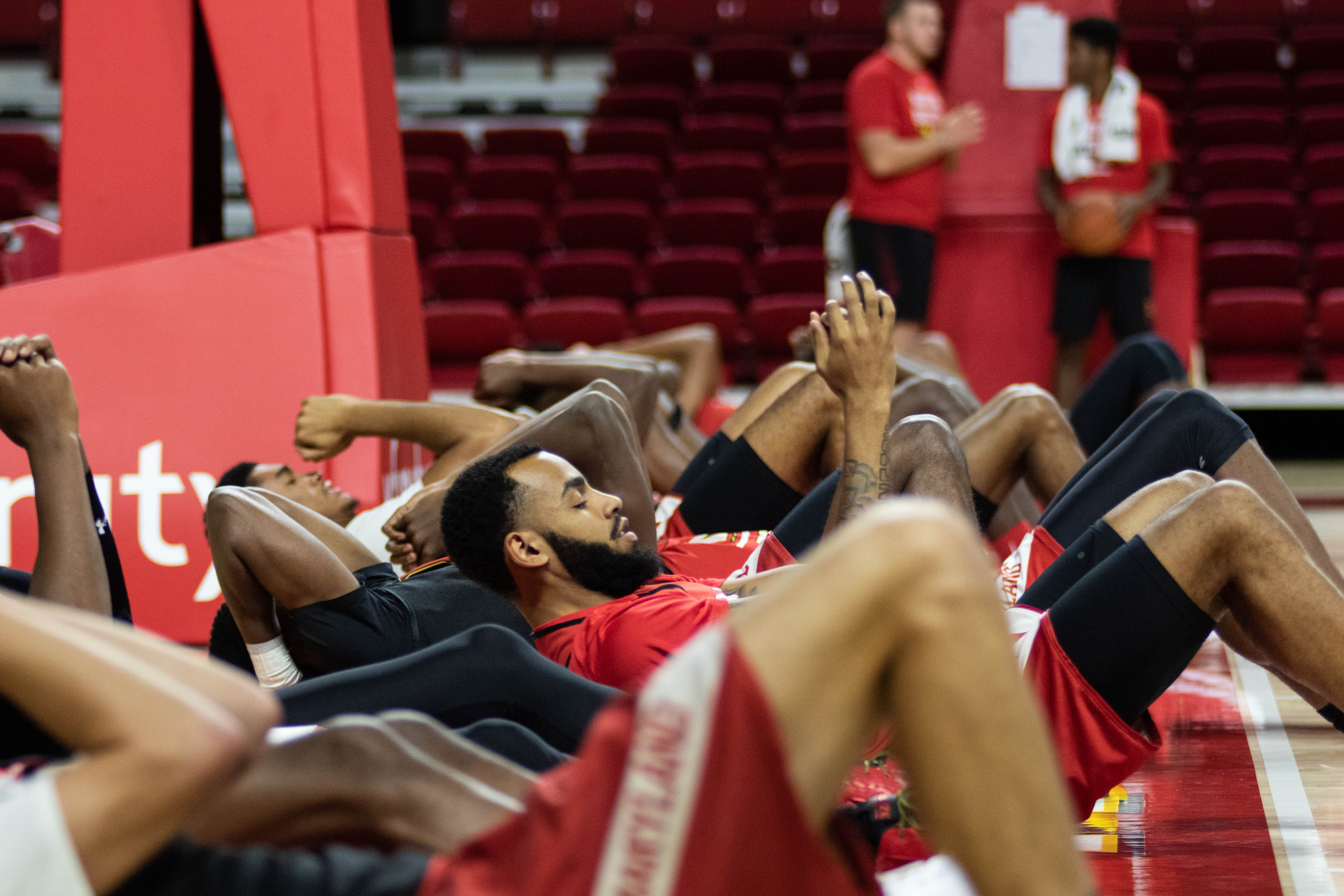 Guard Eric Ayala warms up with his Maryland basketball teammates during a practice on Oct. 15, 2019. (Julia Nikhinson/The Diamondback)

Maryland men’s basketball guard Aaron Wiggins couldn’t escape it. Whether on social media or in the annual “One Shining Moment” tournament montage that follows the title game, Wiggins kept seeing the highlight of LSU guard Tremont Waters ending the Terps’ season in the round of 32 with a last-second layup.

Others, such as forward Ricky Lindo, made deliberate attempts to avoid it. Guard Serrel Smith had seen it, but tried not to dwell on it too much.

There wasn’t a consensus on how the group of five now-sophomores coped with the moment that ended their freshman season. But each member of the class agreed the experiences of last season have helped them grow up and primed them for the team’s lofty expectations this year.

“It was a really big deal for the guys who returned this year,” Wiggins said. “Everybody was hurt, everybody felt like we could’ve made it deeper. We could’ve had a deep run last year, and we want to get back to it this year.”

Last season, after arriving as the No. 7 recruiting class, according to 247Sports, the highly touted five-man freshman class of Lindo, Smith, Wiggins, guard Eric Ayala and forward Jalen Smith played a pivotal role in the team achieving the success it did.

Each player was part of coach Mark Turgeon’s rotation, one that mostly consisted of eight key players. All five rookies featured for at least 12 minutes per game.

Jalen Smith was third on the team in scoring and second in rebounding. Ayala emerged as the starting guard alongside Anthony Cowan in the backcourt. Wiggins became the team’s most prolific 3-point shooter, while Serrel Smith and Lindo carved out roles off the bench.

There were moments of brilliance, such as Jalen Smith’s posterization of a Belmont player in the first round. But with youth and inexperience comes mistakes, and some stood out to Turgeon this offseason.

“I went back and watched every game when I was traveling recruiting the last month or so,” Turgeon said at preseason media day. “Wow, it was like we were so young in what the guys were able to do.”

Wiggins noted that the game has slowed down for the group of sophomores, while Lindo said they’ll be more accustomed to playing in hostile environments on the road.

That all took getting acclimated to during their first season. But with the roster makeup last season, those five freshmen had no choice but to learn while under the weight of being meaningful contributors on the team.

“We learned a lot from it. We learned all the things that we did wrong, all the plays that we messed up last year,” Jalen Smith said. “And just being a freshman, you were coming into a big stage. So it’s all about just focusing in and just learning.”

For his team to live up to the expectations as the preseason-No. 7 team, Turgeon will need the sophomores — who he likened to “grown men” now — to show they’ve taken the next step.

A new group of five heralded freshmen join the team this year to help alleviate some of the lost production. Wiggins said that in a lot of ways, the new freshman group reminds him of his classmates last season — a tight-knit squad that does everything together.

And though they’re only second-year players, the sophomores are already embracing leadership roles with Maryland’s roster skewing heavier toward underclassmen.

“Just helping our freshmen, guiding them in the right direction,” Ayala said. “We’ve been around the block a little bit, we went far last year. For us, it was all new.”

Leading by example began in the offseason. Turgeon said he doesn’t think he’s ever had a team work as hard during the summer.

The impetus behind the work ethic was clear for the sophomore class: After a sample of what success in the NCAA tournament feels like, they’re determined to find even more this season.

“We got a taste of what it feels like to be a winner in the NCAA tournament. It felt good, and we were sad that we went out early,” Serrel Smith said. “We’re not trying to feel that again. We’re trying to go onto bigger things, take the next step.”