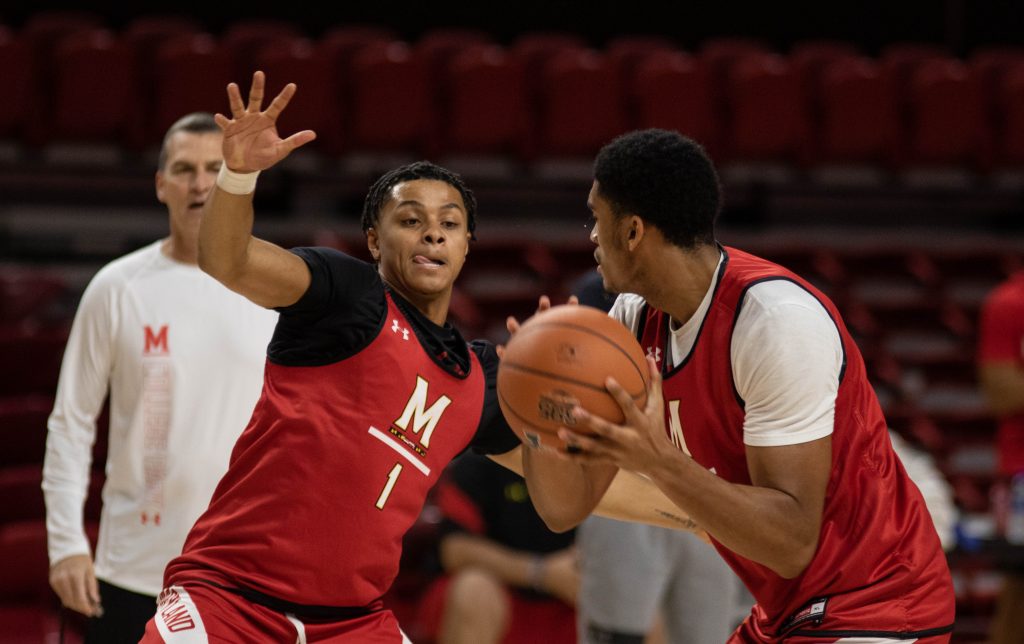 Trailing by 13 points with 16 minutes to go, Maryland men’s basketball coach Mark Turgeon needed an answer to slow down LSU and erase the deficit in the second round of the NCAA tournament.

The margin grew to 15 after Turgeon picked up a technical foul and guard Skylar Mays converted two free throws. And following the free throws, the Terps lined up in a 3-2 zone instead of the man-to-man defense they typically employ.

Maryland used that zone for the remainder of the game, confounding the Tigers on the majority of its remaining possessions. After scoring 46 points in the first 24 minutes, LSU only managed 23 in the final 16, allowing the Terps to storm back to even the score before ultimately losing on a layup with 1.6 seconds remaining.

During Sunday’s open practice, the team’s first on-court appearance in front of fans since that loss, Turgeon wore a mic and told fans this year’s team would incorporate more zone and press defenses, a decision that has the potential to make life more difficult for opposing offenses.

“Being able to go from press to man-to-man to zone, it makes it confusing for the offense when we’re playing against them,” guard Aaron Wiggins said after Sunday’s practice.

Throughout his coaching career, Turgeon’s defensive philosophy has been rooted in a half-court man-to-man. Typically, he’s only strayed away from that scheme when his team finds itself trailing and searching for answers.

But entering his ninth season as the Terps head coach, Turgeon thinks he has the most depth of any team he’s led in College Park. The options and ability to rotate players is conducive to Turgeon featuring hounding — and taxing — press defenses.

During Sunday’s open practice, the team showed a three-quarter-court press and half-court press. As the season goes on, Turgeon expects to continue expanding the press defenses he’ll have at his disposal.

“Today is only our 13th day together, and so we’ve got a lot in. And we’re doing it actually pretty well for this early,” Turgeon said. “I do think there’s two more presses that we’ll still put in before December maybe.”

Last season, Maryland didn’t have the depth it has this year. But the defense did have the presence of forwards Bruno Fernando and Jalen Smith serving as the last line of defense to block shots, combining for 104 rejections between the two.

With Fernando now in the NBA, the preseason-No. 7 Terps’ top strength on the defensive end is their size and length. Of the team’s 13 scholarship players, only guard Anthony Cowan is listed under 6-foot-4.

When the team uses zone this season, that size and length can help Maryland get in passing lanes to cause miscues and force difficult shots for the opposition.

“We’ve got a lot of length, a lot of athleticism,” forward Jalen Smith said during preseason media day on Oct. 15. “I believe we can be a deadly team in the zone.”

Using the three-point shot is a common strategy to beat a zone that congests the middle of the floor. But that strategy will become slightly more difficult this season with the three-point line moving back over a foot.

On the offensive end of the floor, Turgeon wants the team to play faster this season, again citing the depth as a catalyst for that style.

One way to create increased pace is by wreaking havoc on the defensive end and forcing turnovers — an area that Maryland has struggled with under Turgeon. Since he started as head coach in 2011, the highest ranked the Terps have finished in steals per possession among more than 300 Division I schools is 156 in the 2013-14 season.

Last season, Maryland turned the ball over 119 more times than its opponent. There’s hope that a switch in offensive philosophy, and switching defenses, will help correct that issue this season.