“He plays hard”: Donta Scott has exhibited physicality early on for Maryland basketball 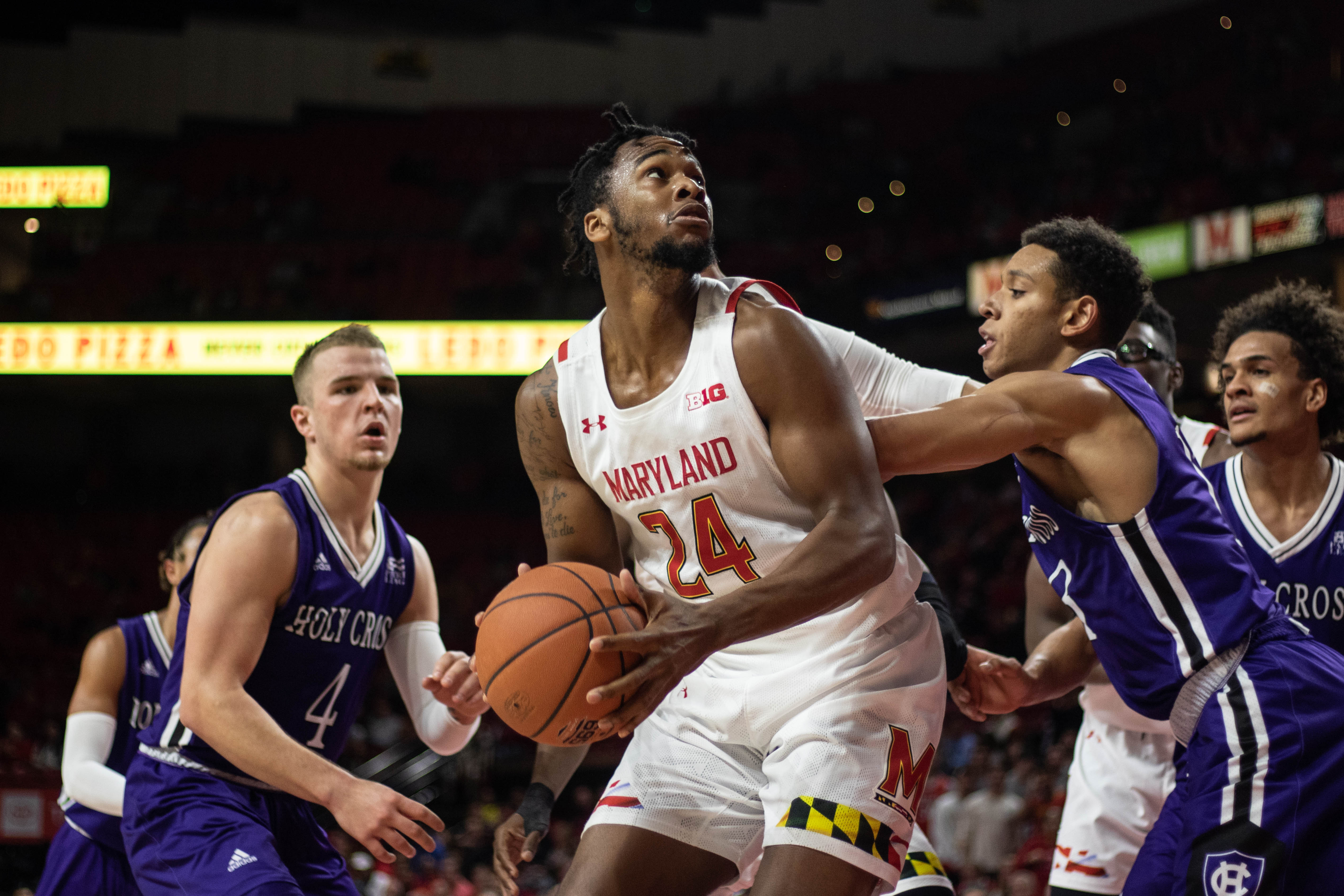 For as good as Donta Scott looked during Maryland men’s basketball’s opener against Holy Cross, his second career performance against Rhode Island last week displayed the ups-and-downs any player — but especially one in his first year — can experience early in the season.

The forward was one of the first players off the bench and picked up his first foul a minute later. Less than 90 seconds after that, he turned the ball over. And while he pulled in an offensive board, he missed the put-back attempt and went on to foul another Rams player as he chased down the loose ball.

At that point, down 12-6 to Rhode Island, coach Mark Turgeon had seen enough. He opted to bring on fresh legs, searching for a combination that would click. Maryland would figure it out, pulling away in the second half en route to a 73-55 victory.

But for Scott, his five-point, one-rebound output was a step back from his eye-opening nine-point, six-rebound effort against the Crusaders. It’s not exactly surprising, though, particularly for a freshman in the midst of learning two positions — small forward and power forward. Scott still featured for 14 minutes, the sixth-most on the team, and looks to be the readiest of Maryland’s freshmen cohort.

“He’s always been a tough guy, and he’s even a little more physical than I thought,” Turgeon said. “That’s just all he knows. It’s nice. It really helps us.”

Ahead of the Terps’ season opener, guard Darryl Morsell said Scott has the characteristics often seen in players from Philadelphia: “He plays hard, he plays with an edge,” and he leaves everything out on the court. He’s a “freight train coming down hill,” Morsell said.

“Baltimore a little bit tougher, though,” Morsell said with a laugh, shouting out his hometown.

Scott backed up Morsell’s talk against Holy Cross, seeing time at both the 3 and 4 during his 18 minutes, knocking down a trey and adding a steal. He pushed the pace when he could and slammed home a dunk. After that performance, Morsell heaped on more praise to the 6-foot-7 forward and added another unique description of the former four-star recruit: “He’s like a bull.”

Scott’s 2-for-6 night against the Rams wasn’t perfect, but the glimpses of pace and power he’s shown have impressed his teammates.

“In those spurts that he does have, when he’s really full of energy, just the amount of toughness he brings to our team, his ability to get up and down the floor, guard four or five different positions,” guard Aaron Wiggins said. “He makes us a much faster team … a much more complete team.”

Morsell understands the difficult transition Scott is going through, trying to learn plays and assignments for two different positions. Morsell went through it last year. Now as a sophomore, he has Scott’s ear, giving tips from his experience.

But his teammates see Scott progressing quickly and figure he’ll be a key contributor off the bench this year. Turgeon said Scott’s game reminds him of Dez Wells, another hybrid-type player who was at Maryland from 2012 to 2015.

And when Oakland visits Xfinity Center on Saturday, Scott’s versatility will likely play a large role in combating the Golden Grizzlies’ size, meeting them with his own energy and physicality.

“Any time he goes out on the floor, he’s always trying to grab every rebound, grab every steal, dive on the ball,” forward Jalen Smith said. “He’s just playing hard pretty much every possession of the game.”