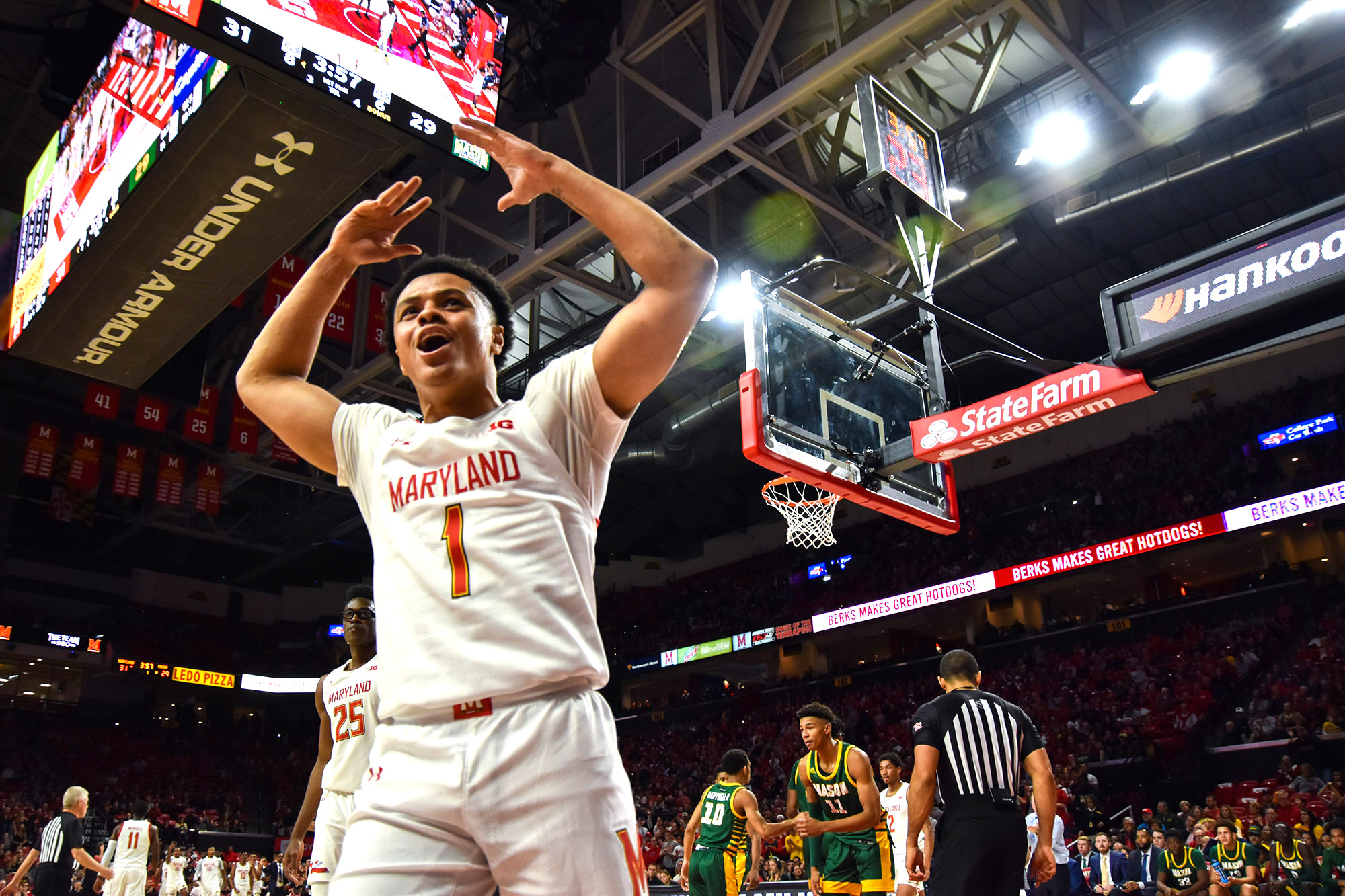 Guard Anthony Cowan pumps up the crowd after an and-1 during Maryland men's basketball's 86-63 win over George Mason on Nov. 22, 2019. (Joe Ryan/The Diamondback)

The Maryland men’s basketball team leapfrogged North Carolina in this week’s AP top-25 poll, slotting in at No. 5 in the country while the Tar Heels dropped to No. 6 despite unbeaten starts from both squads.

This is the highest the Terps have been ranked since the 2015-16 season, when they peaked at No. 2. They finished 27-9 that year and entered the NCAA tournament as a No. 5 seed — leading to a Sweet 16 exit — after losing four of their last six regular-season games.

Coach Mark Turgeon’s team has battled slow starts to games so far this season, but it has gone on to win its five contests with relative ease. The Terps topped Fairfield and George Mason last week and are preparing for the Orlando Invitational over Thanksgiving, with guaranteed matchups against Temple and either Harvard or Texas A&M.

Maryland has averaged 15.6 points through the first 10 minutes of games this year while its opponents have scored an average of 17.2 points during the same stretch. It’s the end of the first half that has proven to be the difference, though, with the Terps scoring 10.8 more points than their opponents in the final 10 minutes entering halftime.

North Carolina dropped one spot despite a 4-0 start, opening the season with a 76-65 win over Notre Dame and continuing from there with victories over UNC-Wilmington, Gardner-Webb and Elon. The Tar Heels trailed the Phoenix by one point at halftime before embarking on a second-half tear.

During Maryland’s 5-0 start, forward Jalen Smith has chipped in three double-double performances and guard Anthony Cowan is averaging 13 points per game. Turgeon has also shown a willingness to rotate his squad early in the season, with 10 players averaging nine minutes or more.

It’s that depth — which Turgeon has lauded throughout the offseason and first five games — that has propelled Maryland into the top-five rankings with aspirations for a high Big Ten finish and a lengthy NCAA tournament run.