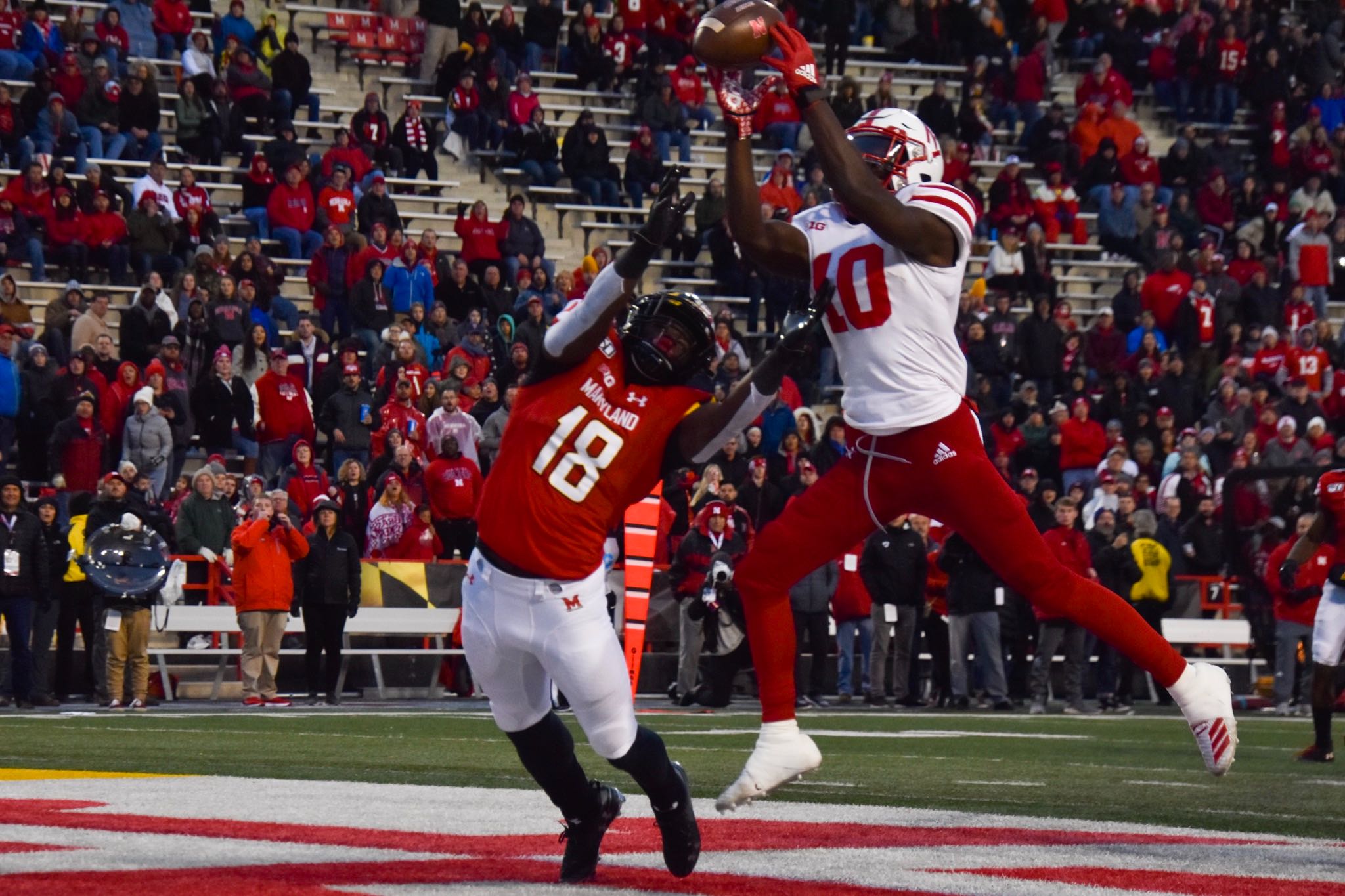 Nebraska wide receiver JD Spielman catches a tipped ball over defensive back Jordan Mosley for a touchdown during Maryland’s 54-7 loss to Nebraska at Maryland Stadium on Nov. 23, 2019. (Joe Ryan/The Diamondback)

Nick Cross got one hand on Adrian Martinez’s overthrown pass early in the second quarter, but the Maryland football safety couldn’t corral the ball. It tipped up in the air, yet safety Jordan Mosley couldn’t quite grasp it, either.

JD Spielman could, though. The Nebraska wide receiver pulled down the twice-tipped pass for a 25-yard score on third-and-11, furthering the Terps’ dismal start on a dismal afternoon. Through a cacophony of errors — fumbles, penalties, and bobbled would-be interceptions — Saturday turned from Maryland’s last best chance at obtaining often-elusive victories into just another blowout.

The onslaught of miscues began on the Terps’ first offensive play, when running back Javon Leake coughed up the ball at the end of a 14-yard gain. And it continued from there at every head-scratching turn.

This was predicted to be a six-point game, a matchup of two sub-.500 teams on ugly losing streaks. This could have been the start of the Terps’ path back toward mediocrity, with two opportunities remaining to pick up wins that would symbolize progress and hope. This should have been a tight performance to send off the team’s seniors in their last matchup at Maryland Stadium.

Instead, the 54-7 result displayed how the “small victories” coach Mike Locksley notices from his rebuilding program are non-apparent on Saturdays. Coming out of a bye week, Maryland was never in the contest, folding in front of a Cornhuskers-dominated crowd in College Park in its worst loss this season — not by point differential, but by level of embarrassment.

There have been other blowout defeats before this one — a 59-0 shellacking at the hands of Penn State; a 40-14 defeat to Purdue and its backup quarterback; non-competitive affairs against Minnesota, Michigan, and especially Ohio State. But Nebraska was another squad languishing with a losing record on its four-game losing streak.

“We’re better than what we’re showing on Saturdays each and every week,” Locksley said. “It’s my job as the head coach to figure out a way to play to our standard.”

For two teams that looked relatively similar on paper, this weekend’s performance shows the breadth of improvement required. It’s one thing to lose to then-No. 3 Ohio State. It’s another for a similarly struggling team to run up the scoreline.

On Leake’s first carry of the game, he broke into the second level, but cornerback Dicaprio Bootle popped the ball out of his grasp to set up the Cornhuskers’ first scoring drive. When Maryland’s defense forced a third-down stop on the next series, a leaping penalty on Isaiah Hazel gifted Nebraska a new set of downs and another touchdown drive.

Then, on the ensuing kickoff, Leake tried to scoop up a pooch kick on the first bounce. But the ball tipped off his fingers and Nebraska recovered again, setting up a field goal and a 17-0 lead after about 12 minutes of play.

“That’s honestly just lack of focus, lack of mental toughness,” offensive lineman Ellis McKennie said. “That was one of our keys going into the week, too, was taking care of the football. We knew what type of weather we were going to have, so it’s disappointing that we weren’t able to execute on that front.”

Next would be the twice-tipped Nebraska touchdown pass, and then another Spielman touchdown, and then another field goal, sending the Terps into the locker room down 34-0. The Cornhuskers kept the pressure on when they retook the field, too.

“Really, it is as simple as going out there and finishing a team off,” said Martinez, who led Nebraska with 194 passing yards, two touchdowns and an interception. “Just having the killer instinct.”

It was during that stretch before intermission when the rain began to fall at Maryland Stadium, and the student section crowd — not that there were many to begin with — well and truly cleared out.

For Maryland, when it rains, it pours. On his second series in what would likely be his most playing time of the year, freshman quarterback Lance LeGendre scrambled for gains of 26 and 17 yards before dislocating his left shoulder. The rest of the Terps’ four passers — Josh Jackson, Tyrrell Pigrome and Tyler DeSue — managed to throw for 57 yards. They picked up 206 total yards compared to the Cornhuskers’ 531.

“The fumbles, the inability to throw the football, just continues to just kind of piss me off a little bit,” Locksley said. “We just can’t execute, whether it’s protection, quarterback decision-making, pitching and catching.”

Three quarters after his first fumble, Leake sat on the turf around midfield, seemingly too stunned to move. Another ball slipped out of his grasp, Nebraska recovered it and would go on to find the end zone once more. As Leake walked off the field, he flailed his arms in anger over a day gone wrong for him and his team.

While he broke off a 58-yard touchdown run late in the fourth, Leake’s rough day mirrored that of his squad’s. Saturday’s lopsided defeat was Maryland’s fifth 30-plus point loss this season, another blow in Locksley’s first season as full-time head coach.

“It’s hard to see now, especially from the outside,” linebacker Chance Campbell said, “but there’s some stuff that’s trending in the right way.”