In Maryland football’s ongoing rebuild, Mike Locksley is focused on the “small victories” 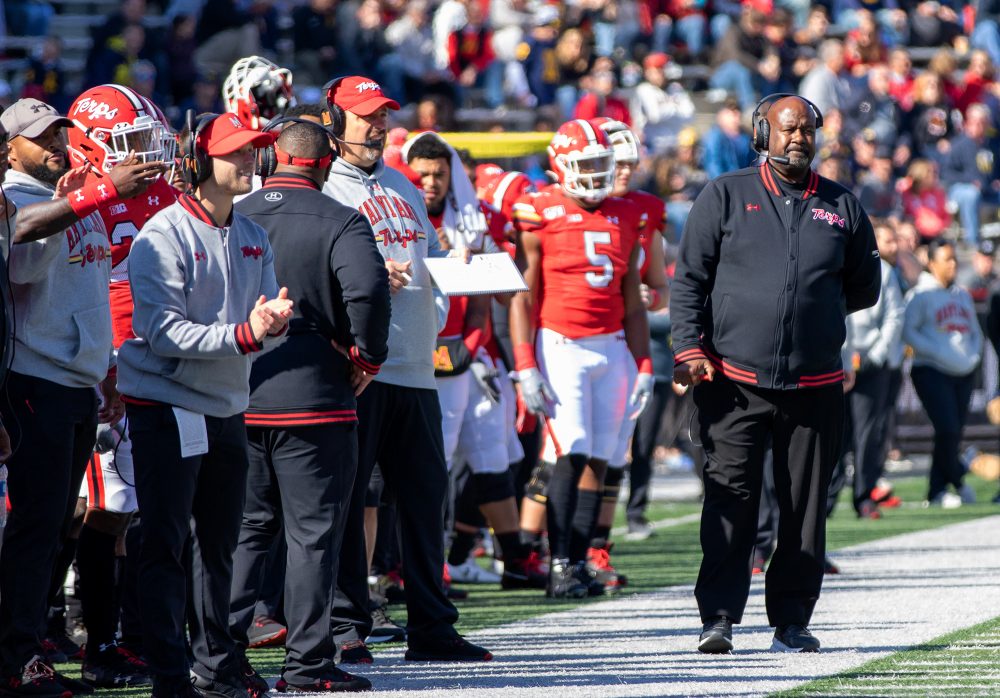 Mike Locksley sees something in this Maryland football team, and while it may not be wins — not at this stage of a rebuild, at least — it’s an encouraging sight nonetheless.

He sees the seniors who, against all odds, are still leading — now playing for their third full-time head coach since they’ve arrived in College Park. He sees running back Jake Funk, out with his second torn ACL in two years, enter his office each week to rave about the future of the program. He sees 100-some players, despite losses piling up, return to practice each day ready to work.

So while the wins haven’t materialized, Locksley is beginning to see the groundwork of the rebuild take shape. And despite being five games into a losing streak that’s turned a promising beginning into a reality check, it’s those small moments that uplift Locksley more than whatever’s occurring on the field.

“I’m more excited about being the head coach at Maryland now than I was even when I got the job,” Locksley said. “Having been a part of winning championships and knowing what that looks like, I see these small victories within our program.”

[Read more: Maryland football’s season is almost over, but the team still has something to prove]

Locksley’s championships are from his time with Alabama, securing a national title in 2017 and conference championships in 2016 and 2018. But there was a time, long ago, when Locksley was just a 31-year-old positional coach and the Terps were still in the ACC. Back then, they secured the 2001 ACC championship, their first in 16 years.

Maryland has managed an above-.500 conference record just four times since, its last in 2010. And with the move to the Big Ten East, a return to those heights seems daunting.

But the climb must start somewhere and sometime, even if much of Locksley’s first year has involved fiddling with carabiners and harnesses while scoping out footholds for future use.

“In order to be where we want to be and build a big program, little things like that have to add up,” wide receiver Brian Cobbs said. “I don’t think it needs to be a big jump, it’s just little pieces here and there that are missing. So once everybody kind of adds those in, then that’s when everything will kind of come together.”

At 3-7 with just two games remaining, bowl eligibility is out of the picture. Locksley believes success isn’t always measured in wins and losses, though, citing the Crimson Tide’s 28-point loss to Clemson in the national title game before he took the reins for Maryland. Alabama put up a duck that day. But it hardly stained the program’s championship pedigree.

Maryland is nowhere near that level, and seven losses in the regular season are different than one in a national title game. The team feels positive steps have been taken, however. Cobbs pointed to improved discipline in games and better practice techniques. Locksley highlighted running back Javon Leake’s development. Defensive lineman Brett Kulka noted that there’s a better knowledge of the new staff’s playbook.

“The wins might not show it, but I think embracing the systems, both offensively and defensive — and special teams, really — that’s obviously a big step in any program, especially in the first year,” Kulka said. “We’ve set standards and we understand what’s needed to meet those standards, so I think the groundwork has really been laid at this point.”

It’s that groundwork — or framework, or foundation, or any number of architectural synonyms Locksley and Co. like to employ — that the coach uses in recruiting pitches. He doesn’t sell an ability to win during visits; rather, Locksley describes the program he strives to build.

For the seniors who will run out of the tunnel at Maryland Stadium for the final time Saturday against Nebraska, they’ll never be part of the finished product. But for those who will be here down the line, they hope the final two games can help turn this season’s struggles into future years’ gains.

“Right now, it’s just working on some little things here and there,” Cobbs said. “But this coming winter, spring and summer will be a great time to mold all the pieces together and then just turn into the new team we know we can be.”