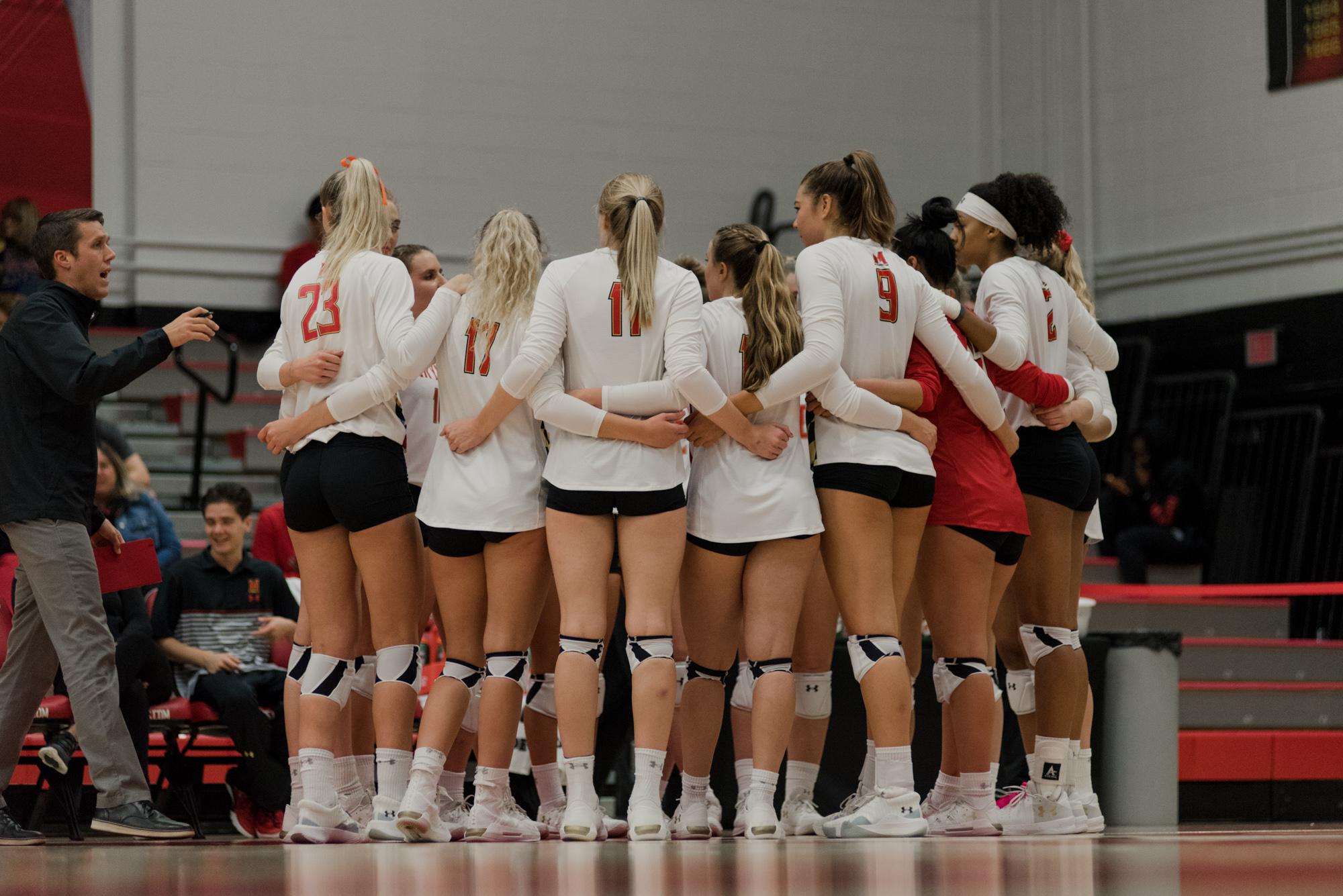 The Maryland volleyball team huddles during its 3-2 win over Indiana on Oct. 16, 2019. (Gabby Baniqued/The Diamondback)

While Pritchard was in position to bump the ball to a teammate, it instead glanced off her arms and fell harmlessly to the floor — the first of seven service aces for the Boilermakers in a 3-0 trouncing.

The Terps failed to replicate Purdue’s dominance in that aspect, going without a service ace in the match. In Maryland’s Friday night triumph over Indiana, the team got just six service aces over five sets in a match it won 3-2.

On the road against Purdue, the No. 16 squad in the country, Maryland displayed its immense troubles with the serve and pass game, plaguing them en route to a swift defeat.

“We lost the serve and pass plain and simple,” coach Adam Hughes said. “They were serving some short balls, then some deep balls, and we had no answer.”

Receiving has been an issue for the Terps this season, sitting last in the Big Ten in digs with an average of 11.91 per set. On Saturday, Hughes’ squad continued to struggle — particularly on serves — posting 34 digs, which was 10 fewer than the Boilermakers.

Maryland lost the dig game in its win against the Hoosiers, too, making its back-row defense and serve reception problems a glaring concern heading out of the weekend.

“I think the main difference was our serve and pass,” outside hitter Pritchard said. “I was in a lot of bailout situations, so I was trying to do as much as I could with what the situation gave me.”

The Terps flashed some consistency in the serve receive early on in the third set, and they led by three at a point thanks in part to quality digs. But the first Purdue ace of the frame came on its 10th point, foreshadowing the Boilermakers’ eventual takeover, eventually claiming the set by a six-point margin.

Maryland players saw the Purdue match as uncharacteristic of their abilities, but they’re confident that they can get back to their old serving ways in their four remaining matches.

“We are a great serving team, but I guess tonight we couldn’t get the serves to end up where we wanted them to,” middle blocker Rainelle Jones said. “We’re right there; we just need to be more consistent on our three touches.”

The Terps’ troubles against ranked opponents this season have been well documented. They stand at 0-8 in matches against top-25 teams, which accounts for nearly half their losses.

And with two more currently ranked teams still on the slate — No. 25 Illinois on Friday and No. 6 Nebraska on Nov. 29 — Hughes knows his squad needs to be better with its serve and pass in order to knock off the some of the best units in the country.

“It’s something we’ll have to get better at if we ever want to beat a top-20 team on the road,” Hughes said.