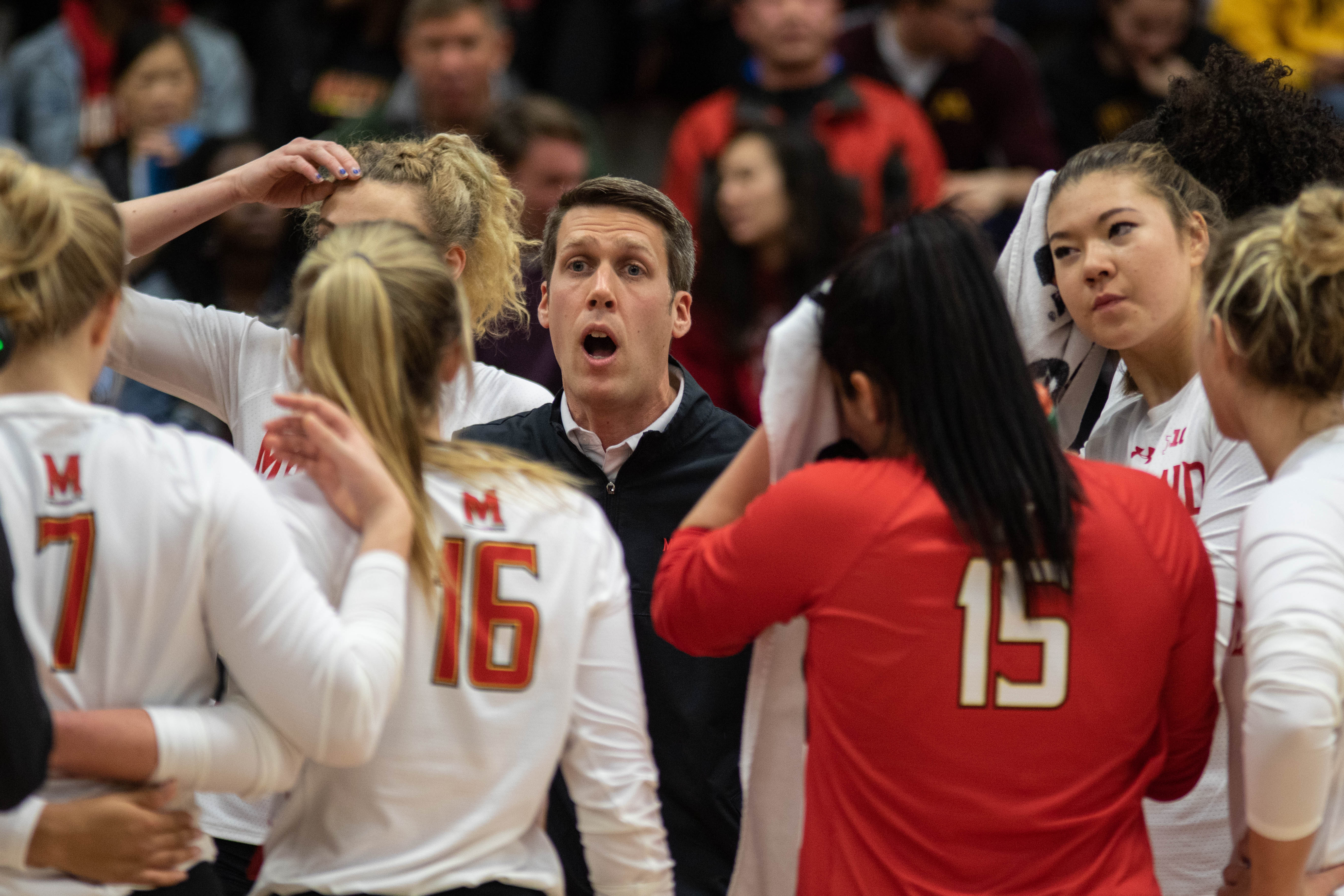 Maryland volleyball coach Adam Hughes talks to his players during his team's 3-0 loss to Minnesota on Nov. 8, 2019. (Julia Nikhinson/The Diamondback)

At the end of a back-and-forth fifth set, it was middle blocker Katie Myers and setter Nicole Alford clenching their fists, yelling themselves hoarse and meeting the rest of their Maryland volleyball teammates in a scrum at center court.

Those two, two of the Terps’ most experienced players, have been sidelined through injury recently. They missed last weekend’s straight-set losses to Wisconsin and Minnesota, and their availability for Friday night in Bloomington, Indiana, was uncertain.

But there they were, rising up together to stuff Hoosiers outside hitter Breana Edwards — who up to that point had torched the Terps with 39 kills. When the ball ricocheted back down onto Indiana’s side of the floor, Maryland had completed a come-from-behind five-set win, overcoming a 2-0 hole and enduring through a lengthy fifth frame in the process (18-25, 18-25, 25-22, 25-20, 23-21).

“That fifth set really created some situations where both teams needed to execute under pressure,” coach Adam Hughes said. “We stayed composed, and people stepped up to make some plays. I’m really proud of the group tonight.”

On Oct. 16 in College Park, the Terps dropped the first two sets against the Hoosiers, but the team narrowly pulled out sets three and four before winning it in exciting fashion in the fifth set. And on Friday, Maryland followed a similar route.

Hughes’ squad extended its set losing streak to 16 with a loss in the first frame. After a nip-and-tuck opening to the match, Indiana rattled off six straight points to win the set, 25-18.

Five of Indiana’s last six points in the frame came off kills, three of them from Edwards, as the Hoosiers continued to exploit holes in the Maryland defense.

The Terps were unable to turn around their luck in set two. The Hoosiers added 14 more kills, and after being up 7-6, Maryland never led again in the frame. Indiana continued to pile on the points, and a kill from outside hitter Megan Sloan gave her team an identical win as the first set, 25-18.

“We knew we had been in that position before,” Alford said, “and we always felt like a comeback was doable.”

While Maryland continued to struggle on defense, Edwards and Sloan continued to swing hard. The two hitters averaged a hitting percentage of .331, and Edwards easily surpassed her career high in kills by 15, finishing with 39.

“It wasn’t just one shot that was killing us,” Myers said. “She played really, really well, so hats off to her.”

The Terps went down 7-2 in set three, and it looked as if they might roll over to lose their sixth straight match in straight sets. But two consecutive service errors from the Hoosiers launched Maryland on a 5-0 run to take the lead back.

Outside hitter Rebekah Rath notched two straight kills to tie the third set at 22. After a timeout from Indiana coach Steve Aird, the Terps put up three more points to win the set, 25-22. It was their first set victory since Oct. 23.

In set four, Maryland carried over the momentum from the previous frame, and it began to find holes in the Hoosiers defense. Indiana kept the score close until the Terps again finished the set on a run, going on to win it, 25-20.

The fifth set was a marathon, and Myers and Alford were at the center of it all. Alford and the back row saved six match points before the team managed to string two together on their 22nd and 23rd points.

Following the nearly three-hour match, Maryland will travel two hours north to Purdue to face the Boilermakers on Saturday evening.

“We’ll have our hands full tomorrow,” Hughes said. “We’ll take it easy in the morning, and I know the group’s excited for a top 25 road match.”