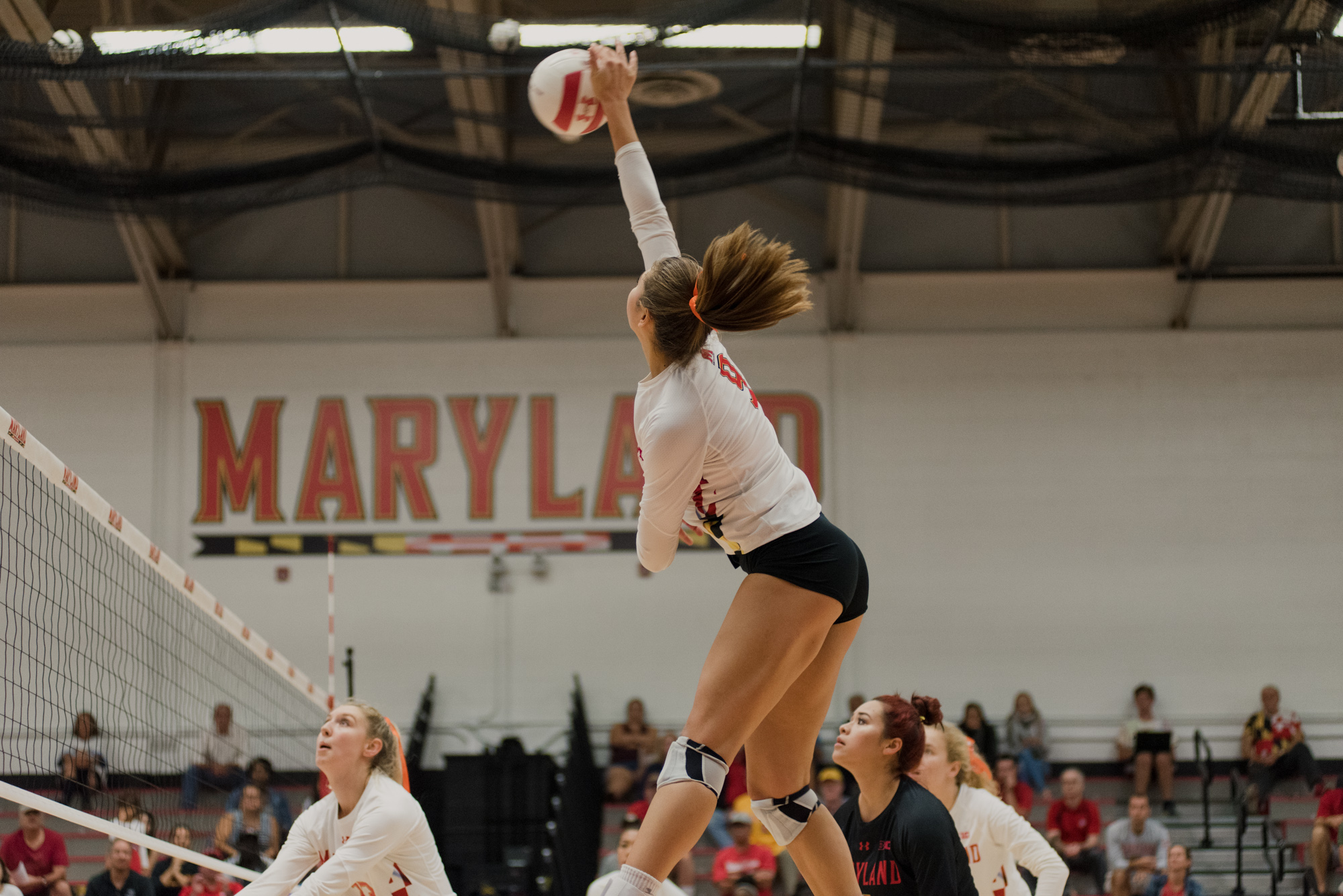 After an errant spike from middle blocker Katie Myers hit the line judge, coach Adam Hughes took a timeout in the third set of Maryland volleyball’s Saturday night match against No. 16 Purdue to calm his team down.

But Hughes’ attempt to settle his players failed to slow the Boilermakers’ attack, and they rallied for two more points after the break, jumping out to a five-point lead that they wouldn’t relinquish.

So, following a two-and-a-half-hour affair against Indiana on Friday night, Maryland was run out of Purdue’s gym in less than 75 minutes on Saturday. In their 3-0 loss, the Terps had trouble offensively, and they never came within five points of winning a set.

“We were out of system a lot,” Hughes said. “We were always playing at a disadvantage because our first touch wasn’t good enough.”

Maryland went with a 5-1 formation for the first time this season against Indiana, allowing setter Nicole Alford to total a season-high 50 assists. Hughes decided to institute the formation once again versus the sixteenth-ranked Boilermakers.

But Alford was limited to just seven assists as the Terps’ offense struggled in set one. Outside hitter Erika Pritchard, Maryland’s kill leader against the Hoosiers, was also stagnant in the first frame, tallying just three kills en route to her team’s 25-17 loss.

“They were mixing up their attack quite a bit,” Pritchard said. “We didn’t really handle it as best we could.”

Maryland’s offensive struggles only worsened in the second set. Hughes’ squad scored on just six of the last 20 points, and the team’s hitting percentage dropped to .175 by the end of the frame.

“We were just trying to feel them out in the first two sets,” middle blocker Rainelle Jones said. “They just started hitting harder and blocking a lot more balls.”

On the other side of the net, the Terps’ had a difficult time containing Purdue outside hitter Caitlyn Newton. Newton had five kills in Purdue’s dominant second set victory, and she went on to finish the match with 15 kills.

The Terps allowed themselves to reconvene during the set break, and they jumped out to a 3-0 lead, backed by two Pritchard kills. But Purdue’s firepower was relentless, and Maryland was sent home with a 1-1 record on the weekend.

“You get small windows against really good teams,” Hughes said. “To be a good team, you need to take advantage of those openings, and we weren’t able to do that tonight.”