As injuries continue to riddle Maryland volleyball, it still has high expectations 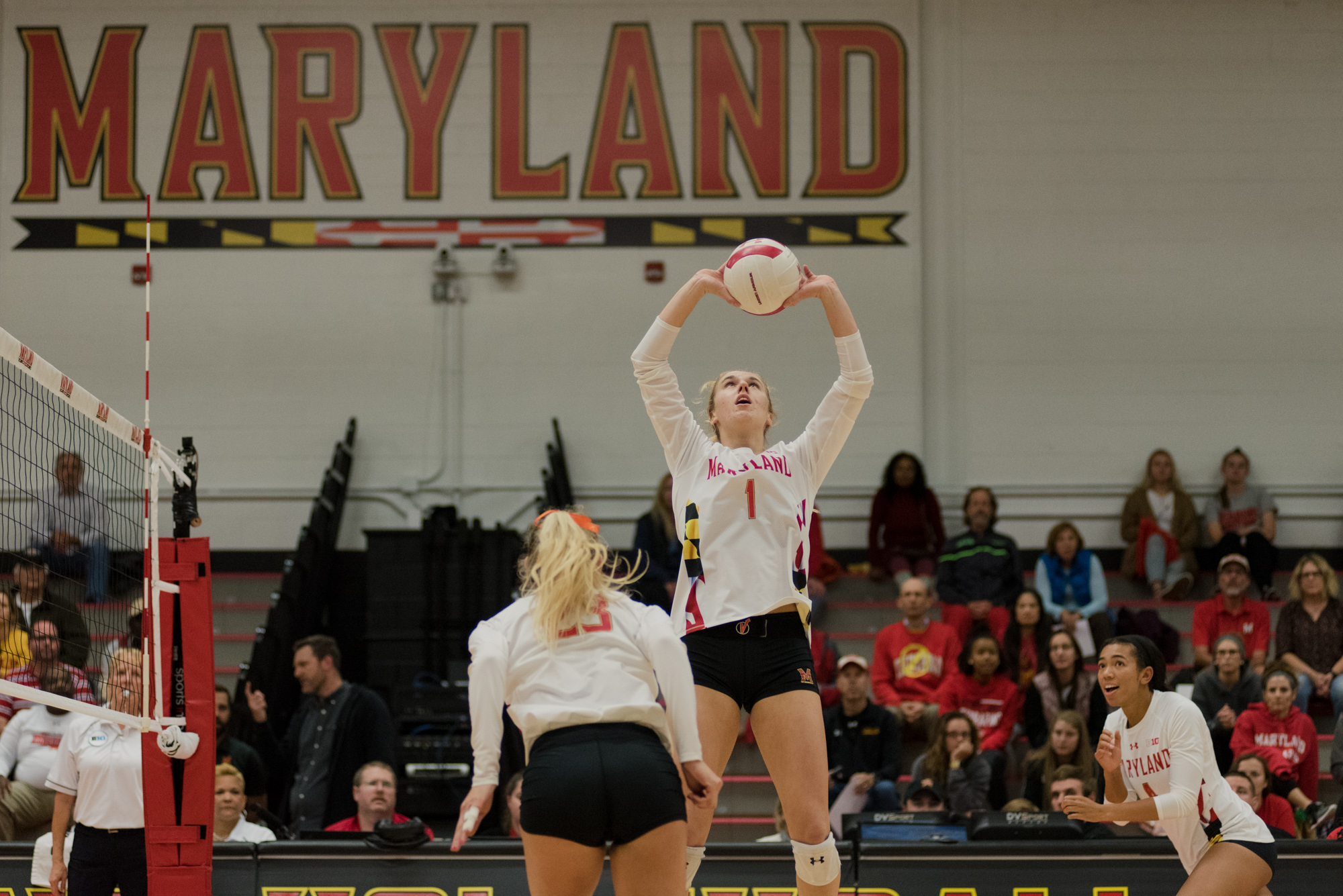 Maryland volleyball setter Nicole Alford delicately pushed the ball just barely higher into the air than it already was, with middle blocker Katie Myers already in position to drive it home.

Myers made no mistake, pinning the strike where no Indiana player would be able to keep the point alive. The sequence capped Maryland volleyball’s 3-2 victory over the Hoosiers on Oct. 16, giving the team its second straight Big Ten win.

Since then, though, Maryland’s firepower has gone silent, with the team battling injuries during a challenging 1-6 stretch. As the Terps prepare to face off against Indiana for the second time this season, they’re expecting to be without both Alford and Myers for the third straight match.

Without the duo last weekend, Maryland fell in straight sets to two top-10 foes, Wisconsin and Minnesota. But coach Adam Hughes’ squad still learned a lot from taking on formidable competition with a depleted roster, and that approach won’t change for the Terps ahead of battles against Indiana and Purdue this Friday and Saturday, likely without two of their key pieces again.

“The change in lineup does not change the expectations of the individuals,” Hughes said. “They still have their performance goals and their own standards. We’re not at full strength, but no excuses.”

This week in practice, the Terps have been focusing on themselves more than their upcoming opponents. Before taking on the Boilermakers on Saturday, Maryland will face the Hoosiers, which the team has already played five sets against this season.

Compared to last weekend, where they were forced to experiment with new lineups in the absence of Alford and Myers, the Maryland coaching staff feels like they’ve had adequate time to arrange a winning lineup versus Indiana.

“We learned some things about ourselves last week,” Hughes said. “The good news is we’ve had some time to prepare with different lineups, instead of rushing it 24 hours before.”

In addition to going up against less daunting opponents, the Terps have had another full week in the gym before they travel to Bloomington. They’ve had time to examine film and have dedicated two days to lifting.

“Having four full days of practice definitely gives us a chance to reflect on the weekend, and look at what we need to do as a team,” setter Taylor Smith said.

Smith has stepped in to assist with the setting duties in the absence of Alford. The team has shifted to a 6-2 formation, but it’s grappled to find success in the altered formation.

The struggle to win matches since the injuries to Alford and Myers can largely be attributed to the opponents the Terps faced. The Golden Gophers were ranked sixth in the country at the time of their meeting, and the Badgers slotted in at fourth.

With an NCAA tournament appearance out of reach, wins and losses have taken a back seat to growth for the Maryland players.

“Looking at just the wins and losses is pretty result-oriented, and we’re a pretty process-oriented team,” Smith said. “We want to get better day by-day, regardless of the result.”

No matter what comes out of each match, the Terps will continue to focus their energy on long-term development.

For Hughes, he expects his team to play as hard against Indiana as it did against Minnesota, unconcerned with who is on the floor.

“We know we still have to battle and compete, Hughes said. “The disadvantage we have right now is trying to put a lineup together, but we’re trying to make sure we’re as efficient as we can possibly be.”