Wherever Maryland volleyball needs Taylor Smith, the senior steps in 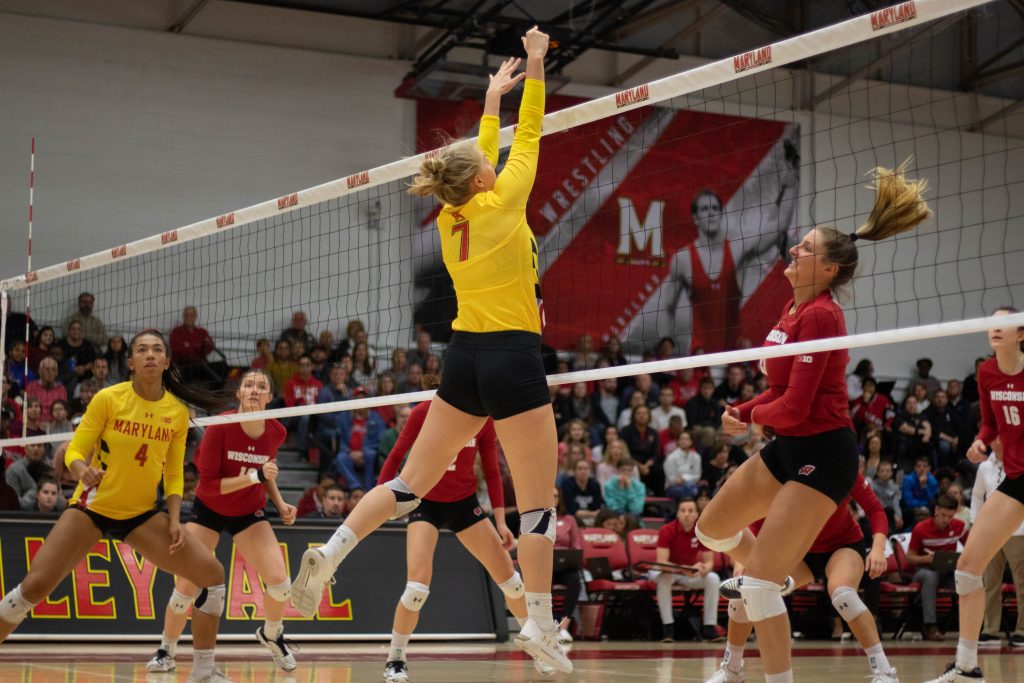 Taylor Smith rises up for a block against Wisconsin on Nov. 9, 2019. (Julia Nikhinson/The Diamondback)

In her first two seasons with Maryland volleyball in 2016 and 2017, setter Taylor Smith saw time in 143 sets. She posted 1,086 assists over the two years, more than any other Terps player during that span.

But after setter Nicole Alford transferred from Georgia Tech last season, Smith’s role diminished. She didn’t see the floor in 2018, and it looked like she would spend the rest of her Maryland volleyball career looking on from the sidelines.

When Alford began this season out with injury, though, Smith shared the setting duties with Samantha Snyder, tallying 81 assists during nonconference play before Alford returned.

But once Alford was injured again and joined middle blocker Katie Myers on the sideline against Minnesota and Wisconsin, Smith was called upon again to step up. Only this time, coach Adam Hughes required Smith to fill in as an attacker, a position the senior had never played before. She obliged without any objections, however, finding her place wherever the Terps need her.

“Taylor is someone I’m really proud of,” Hughes said. “We put her in a hitting role when she’s a setter. She embraced it, and I think that made the team a little bit more comfortable.”

Adjusting to the new position along the front line this weekend, Smith didn’t record a kill but notched three blocks between the two matches. Hughes had nothing but praise for the way Smith conducted herself in an unfamiliar spot, particularly because she had less than 24 hours’ notice.

“She looked comfortable, and she didn’t even want the team to cheer if she made some sort of block,” Hughes said. “I like that mentality.”

In the third set against Wisconsin, Smith moved back to her native setting position, and she recorded three assists in a frame where Maryland scored just 13 points.

[Read more: Maryland volleyball can’t get anything going against No. 4 Wisconsin, losing 3-0]

Smith acknowledged that injuries can force a team to make dramatic shifts in its lineup, but she saw the mix-up as a small challenge for a team that has high aspirations for the future. The senior from Garrett, Indiana took the adjustment in stride.

“The injuries have required people to play in positions and spots they may not be comfortable with,” Smith said, “but it’s just required us to communicate even more.”

Though the Terps didn’t come away with a win last weekend when facing two top-10 foes, they saw positive signs to carry over into the rest of the season. Smith’s teammates, including outside hitter Erika Pritchard, have commended the way she has answered the call.

“A lot of people have stepped up, and that obviously includes Taylor,” Pritchard said. “It’s not a position she was expecting to be in, but she’s done a great job.”

Both Alford and Myers are still not participating fully in practice, so Smith is expected to see more time on the floor this weekend as Maryland travels to Indiana and Purdue.

As her time with the Terps winds down, Smith has six more matches to demonstrate what it means to be a team player. For now, her teammates and her coaches are grateful for the contributions she’s made late in the season.

“It’s nice to have some flexibility when we’re missing a lot of bodies,” Hughes said. “Taylor’s someone we can move around based on who we’re playing and what match ups we have.”