“We got out-coached”: Adam Hughes took blame for Maryland volleyball’s loss to Wisconsin 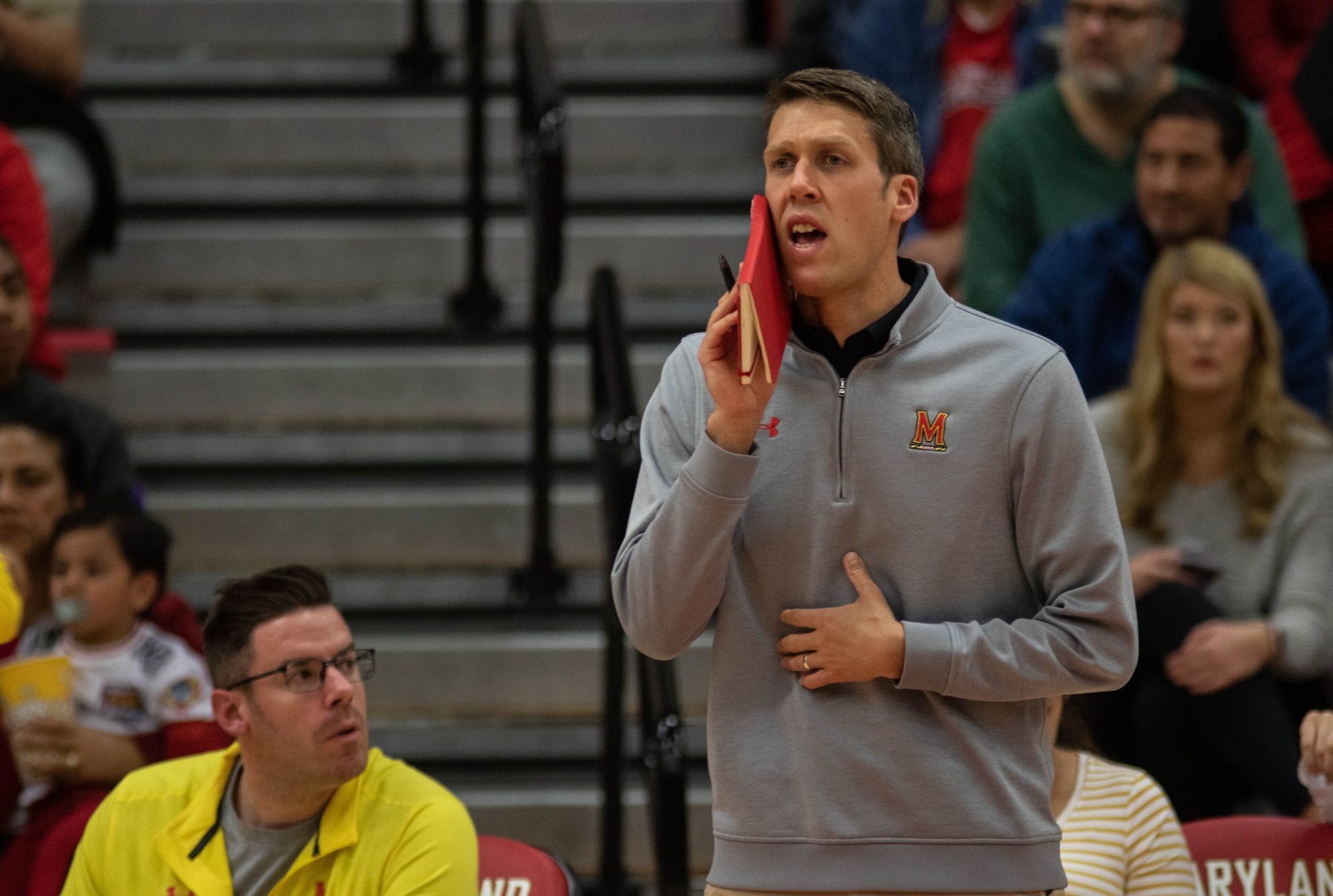 Coach Adam Hughes with his pen and red notebook during Maryland volleyball's 3-0 loss to Wisconsin on Nov. 9, 2019. (Julia Nikhinson/The Diamondback)

At any Maryland volleyball game, coach Adam Hughes can be found standing at the end of his team’s bench, holding a ballpoint pen and a little red notebook full of game notes.

But after Hughes was forced to use his second and final timeout of the third set Saturday against Wisconsin after just 16 points, he began frustratedly clicking the pen against his notebook.

Hughes and his coaching staff had less than two days to prepare for two top-10 teams this past weekend while without two of its captains. And after the Terps fell to the Badgers for their fifth consecutive loss in straight sets, Hughes was quick to put the blame on himself and the rest of the staff.

“Coaches say it all the time and you probably don’t understand it until you sit in this seat, but we got out-coached tonight,” Hughes said. “The coaching staff needs to do better.”

[Read more: Maryland volleyball can’t get anything going against No. 4 Wisconsin, losing 3-0]

Hughes, who is in his second year at the helm of the program, is still trying to earn his stripes among some of the imposing coaches that the Big Ten has to offer.

One night after going up against Minnesota’s Hugh McCutcheon, who is a former National Coach of the Year, Hughes had to face Wisconsin coach Kelly Sheffield. Sheffield has led the Badgers to Sweet 16 appearances in the NCAA tournament in each of his six seasons with the team.

And Wisconsin imposed its will on the Terps despite suffering its first Big Ten loss of the season before traveling to College Park. Hughes acknowledged may have given Wisconsin extra motivation entering the matchup.

“It was a good bounce-back game for them,” Hughes said. “I’m not going to take any credit for them, but I think we, as a staff, need to do a better job.”

Maryland stuck with the Badgers early in the first set. But after holding a 14-12 lead, the Terps collapsed in a 25-18 loss. The second-year coach looked to instill trust between him and the players entering the second set.

“I wanted them to know that I wasn’t going to give up on them, and I hope they would do the same for me,” Hughes said.

The Terps continued to spiral, though, and they lost the final two sets by a combined 24 points despite the coaching staff attempting to switch things up.

Hughes had been giving setter Taylor Smith some reps as a hitter, but he moved her back to her native position for the final set. Smith notched three assists in a set where the Terps totaled just 13 points.

Although Hughes was critical of himself after Saturday night’s loss, his players have faith in him and the rest of the coaching staff to guide them moving forward.

“We’ll work on exactly where we need to be on offense and defense,” libero Allegra Rivas said. “We’re going to watch a lot of film. The coaches will tell us what to take away from it.”

Ahead of the upcoming week of practice, the Terps are hoping to have some of their key pieces back on the court. Hughes will have another full week to prepare his team for two road matches next weekend, where his coaching will once again be put to the test.

“Everyone’s kind of battling those injuries, and I’m hoping we’ll get a few people back next week,” Hughes said. “It changes the structure of practice and how hard we can go.”