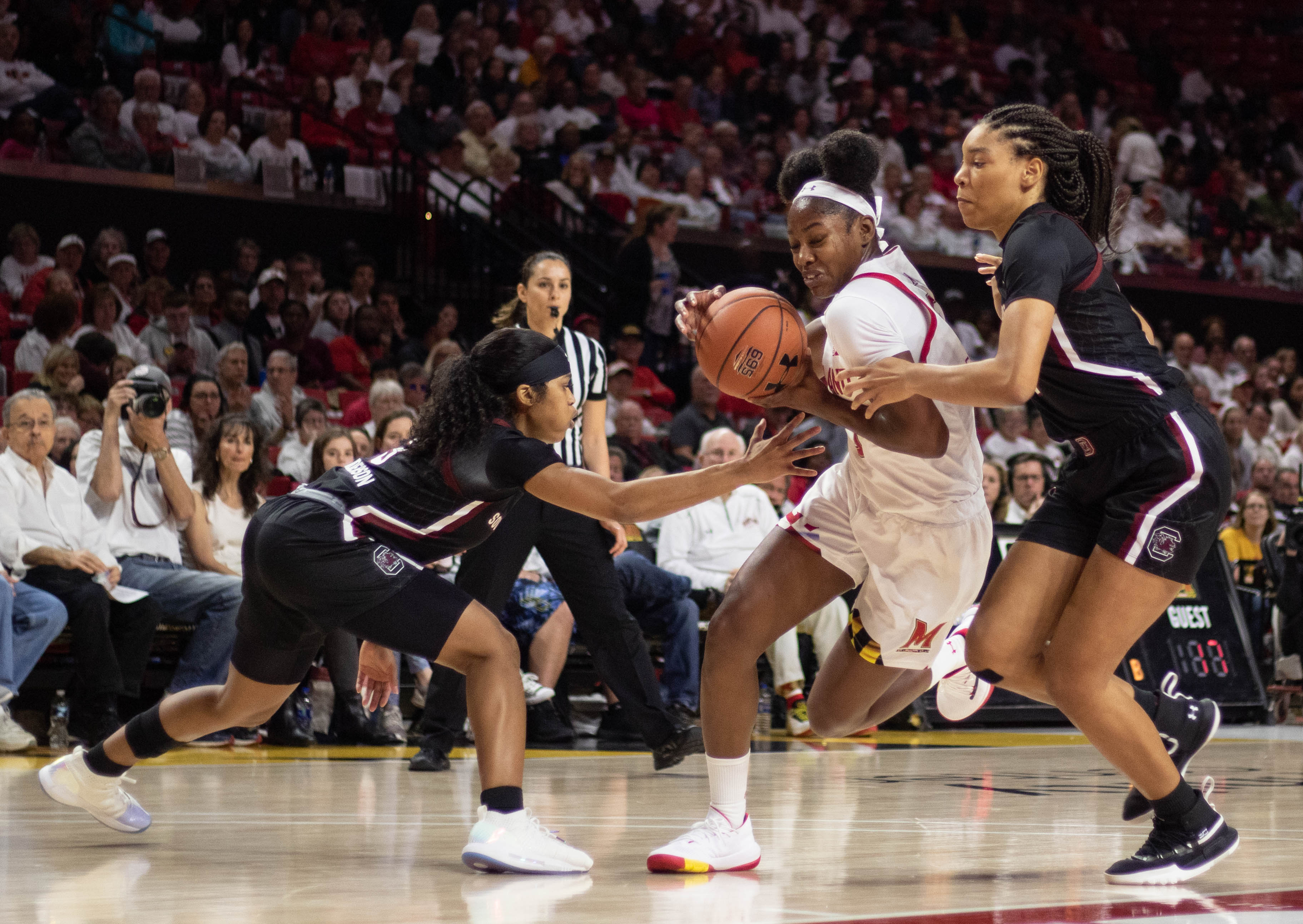 Maryland women’s basketball coach Brenda Frese called timeout after a 3-pointer from the corner, putting No. 8 South Carolina up 13 with just over a minute left in both teams’ first true test of the young season.

Tyasha Harris’ make, though, put the finishing touches on Sunday’s contest. In a matchup the Terps never held a lead in, the Gamecocks’ weren’t particularly proficient, either. Harris’ dagger was their only make from beyond the arc and they shot just 31.7 percent overall.

But South Carolina did enough to dispatch the No. 4 Maryland squad on its home court, 63-54, a team plagued by its own shooting woes. The Terps hung around yet never got within six points in the final 10 minutes Sunday.

“South Carolina really came in ready to make their presence known. They took control of the glass early, they got to the free throw line and really set the tone,” coach Brenda Frese said. “We learned a lot of things that we’re going to be able to utilize moving forward that’s going to help make us better.”

Freshman center Aliyah Boston led the way for South Carolina, proving her mettle with eight points in the first period as Maryland provided little-to-no resistance in the paint. She finished 6-for-10 from the field with a team-high 14 points along with seven boards.

With Maryland trailing by six near the end of the first quarter, forward Blair Watson tipped her team’s lone offensive rebound of the period out to the corner, grabbed it herself and hit a fading 3-pointer to stop the bleeding. That bail-out shot energized the Terps enough to stay in the game for the rest of that quarter, but Watson’s swish would end up being the only long-range shot to fall for Maryland in the first half.

South Carolina’s defense only got more suffocating in the second quarter, holding the Terps to 20 percent shooting from the field. Boston turned her focus to defense, emphatically swatting five shots and altering every layup attempt from those who dared to challenge her.

“She just impacted so many shots when we got into the paint,” Frese said. “She was the anchor defensively that they needed and I think probably got in our heads with all of the missed layups that we had in this game.”

Maryland played some inspired defense of its own, though, constantly stripping South Carolina players on drives to the basket that led to fast breaks on the other end.

The Terps’ eight first-half steals often didn’t lead to points, but they caused the Gamecocks to settle for more jumpers and shoot only 41.4 percent from the floor in the opening half as a result. South Carolina still took a 34-24 lead into the break.

The third quarter was no different for Maryland offensively, as Frese’s squad made only four shots — most of which came on fastbreak layups. But the Terps stayed within striking distance, maintaining aggression on rebounds and getting to the free-throw line despite the poor shooting.

Although forward Kaila Charles struggled with her shot all afternoon — she finished with 11 points on a 5-for-18 clip — her energy and leadership were on display in the second half, battling on each possession as the Terps worked to get back into the game.

But it wasn’t enough, as Maryland couldn’t find a rhythm offensively in the final period, either. South Carolina’s interior size and activity made almost every drive to the basket an ordeal, and the Terps’ 2-for-16 shooting performance from behind the arc Sunday gave little reason for the Gamecocks to alter their defensive scheme.

“We have a lot of lessons to learn out of this. Our rebounding, just learning how to start fast and start strong and not letting people come into our home court and setting the tempo,” Charles said. “It’s early, it’s only the second game of the season, and like I told my teammates, this doesn’t stop our plan of trying to be successful and trying to go as far as we can in the tournament.”

Once the fouls started to rack up for Maryland, the game got away from it. South Carolina hit 10 of its 12 attempts from the line in the fourth quarter, sealing the deal against a cold-shooting Maryland team.

While the defense looked good for the most part, they couldn’t overcome a woeful shooting performance in which guard Ashley Owusu was the only Maryland player who didn’t miss more shots than she made, tallying team-highs with 17 points and seven rebounds.

“We played this game last year and beat them by 24 points and they went further in the postseason than we did,” Frese said. “So it’s really your mentality coming out of [this game] for your season, using the body of work to be better come March.”