After struggling on the road last week, Maryland volleyball looks to get back on track 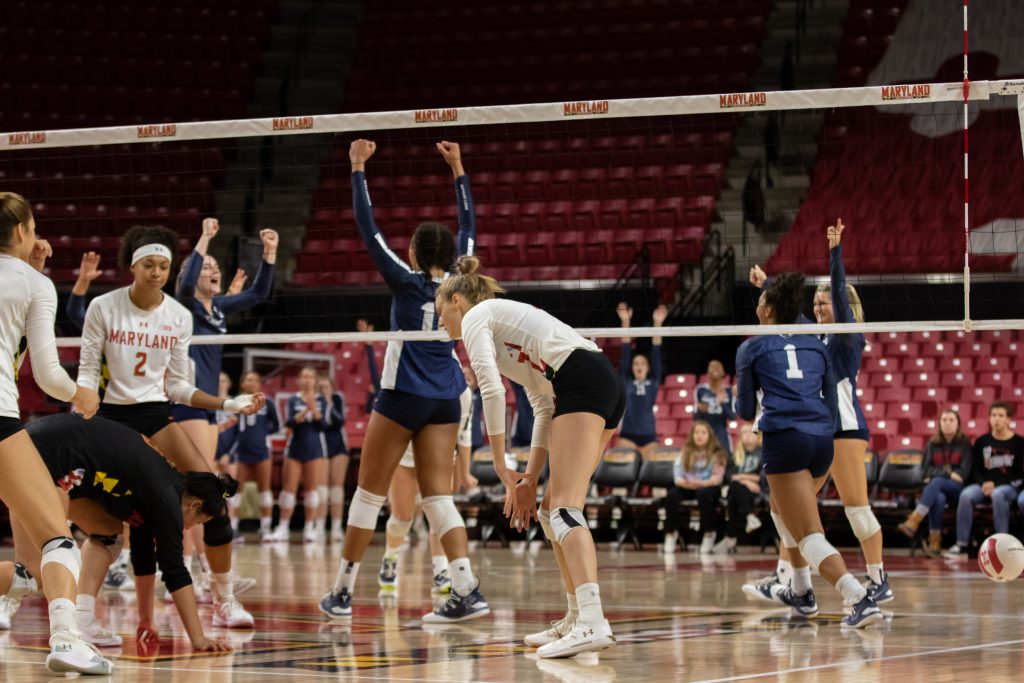 With two away matches last week scheduled just days apart, the Maryland volleyball team hardly had time to figure out what went wrong.

Four flights in five days took the Terps to and from Wisconsin, for a bout with the Badgers and then to and from Ohio to take on the Buckeyes. And Maryland dropped both meetings in straight sets, with just one day in the gym in between matches.

Injuries flared, too, as middle blocker Rainelle Jones nursed a finger injury in both matches, and setter Nicole Alford sat out of Saturday’s affair against Ohio State, leaving a trio of Terps to pick up the setting duties.

So ahead of this weekend’s matches against Minnesota and Wisconsin in College Park, the 12-12 Maryland squad is making the most of its full week to get healthy and address some of its shortcomings of last week.

“The full week gives us a little more time to focus on ourselves,” middle blocker Katie Myers said. “That’s what we really need at this point.”

Poor starts doomed the Terps from the onset in both matches, forcing the team to overcome insurmountable deficits to have a chance.

Coach Adam Hughes’ squad went down 9-1 in the first set against Wisconsin, more or less assuring themselves a loss in set one. In the first frame at Ohio State, the Terps fell behind 9-4, and a comeback effort proved unsuccessful.

Hughes and his staff have put an emphasis on their starts this week in practice, and he’s been able to see some results from the extra work.

“We’re putting the team in a bunch of different scenarios that they can work their way out of,” Hughes said. “I think we’re getting better at our starts.”

Without Alford on the floor, the Terps rotated setters Samantha Snyder, Chloe Prejean and Taylor Smith at the position against the Buckeyes. Snyder has recorded an assist in every match so far this season, but all three players have been able to get plenty of reps during practice.

Alford’s status for the upcoming weekend remains unknown. However, after four days in the gym already this week, the group feels prepared to put up a fight against two Big Ten juggernauts — both ranked in the top-10 — with or without their setter.

“Nicole gave us a calming factor, so without her, we all need to step up,” Jones said. “I feel like we are definitely growing. We’ve been focused on fixing the little details while preparing for these bigger teams.”

Hughes noted the difficulty of last week’s schedule, but the second-year coach doesn’t see it as an excuse to surrender victories to Minnesota and Wisconsin this weekend.

The Terps went 1-6 in sets against the Golden Gophers last season, and they haven’t won a set against Wisconsin since 2017.

Though the last three matches have dampened Maryland’s NCAA tournament hopes, the team has allowed itself to figure out where many of their strengths and weaknesses lie as it prepares for another challenging weekend.

“We’ve learned a lot about ourselves,” Myers said. “Hopefully the home crowd this weekend will give us a little boost.”