Without Nicole Alford, Maryland volleyball couldn’t get in rhythm against Ohio State 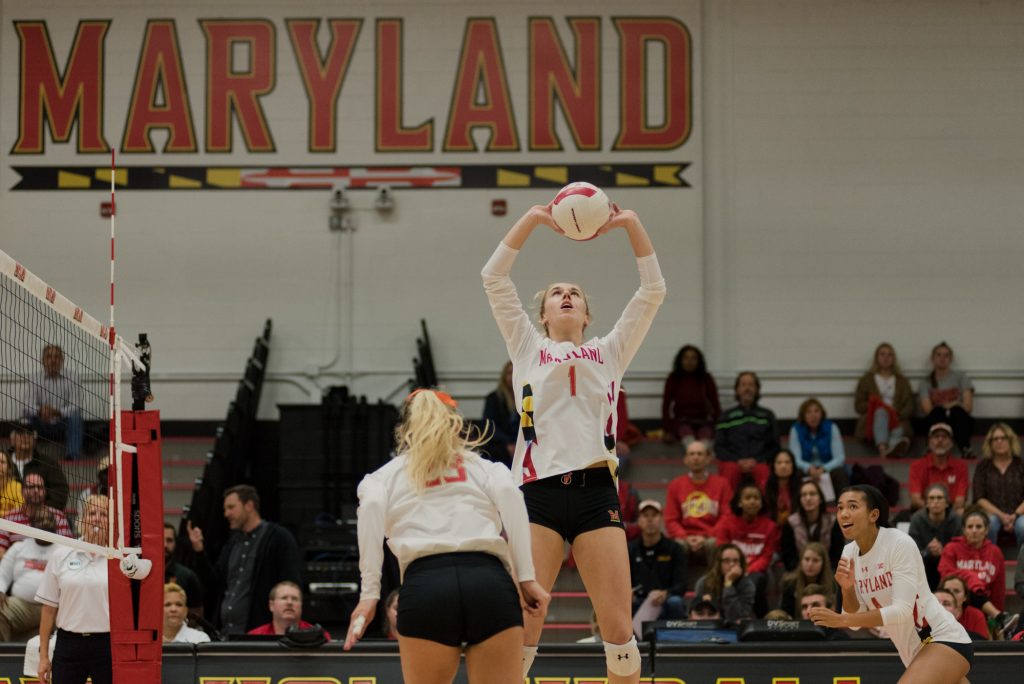 The junior from Annapolis returned just before Big Ten matches got underway, though, and she began to split time setting with Samantha Snyder — a combo that helped Maryland navigate its challenging conference slate.

But after Alford exited Wednesday night’s match against Wisconsin with an injury, she was ruled out against Ohio State on Saturday as well. And without their 2018 assist leader to face the Buckeyes, the Terps were disjointed on their offensive attack, combining for just 29 assists in the straight-sets loss.

“Nicole is kind of the quarterback of the squad,” coach Adam Hughes said. “When she’s out, it changes some of our rhythms and flows.”

Alford currently leads the team with 4.79 assists per set, and Snyder trails just behind her, with 4.66. On Saturday, though, Snyder totaled only 11 assists, tied for her second-lowest output of the season.

Snyder and setter Chloe Prejean split the setting duties against Ohio State. The team runs a different offensive formation when Alford isn’t in the game, switching from a 5-1 formation to a 6-2. The new setup left Snyder and Prejean as the two setters on Saturday.

Toward the end of the third set, with Maryland locked in a battle with the Buckeyes, the formation switch began to cause problems that wouldn’t have surfaced in a 5-1.

“We were in a 6-2, so we kind of ran out of subs there in the end,” Hughes said. “We ended up with a setter in the front row, which is one of the disadvantages of being in that offense.”

[Read more: For Maryland volleyball’s Rebekah Rath, the Big Ten gauntlet has been a learning curve]

While the rest of Hughes’ squad tried to play as if Alford was out on the floor, the team never found a rhythm on the attack.

The Terps were without their best setter — and the intensity and leadership she typically brings to the court, as a team captain.

“She brings a lot of energy to the team, and obviously we missed that,” middle blocker Katie Myers said. “I had to try and match Nicole’s energy.”

Beyond the Alford injury, middle blocker Rainelle Jones is still playing with an injured finger after dislocating it during the Penn State match on Oct. 26.

The team hasn’t given a timetable for Alford’s return, but Hughes is expecting an update toward the middle of this week.

Ahead of the Ohio State match, the Terps had just two days to adjust their game plan to account for Alford’s absence. While they found little success without her, the Terps will have a week to reassess the offensive attack before taking on Minnesota on Friday.

“We had short notice, and we tried to do our best with it,” Hughes said. “Now it’s back to the drawing board.”