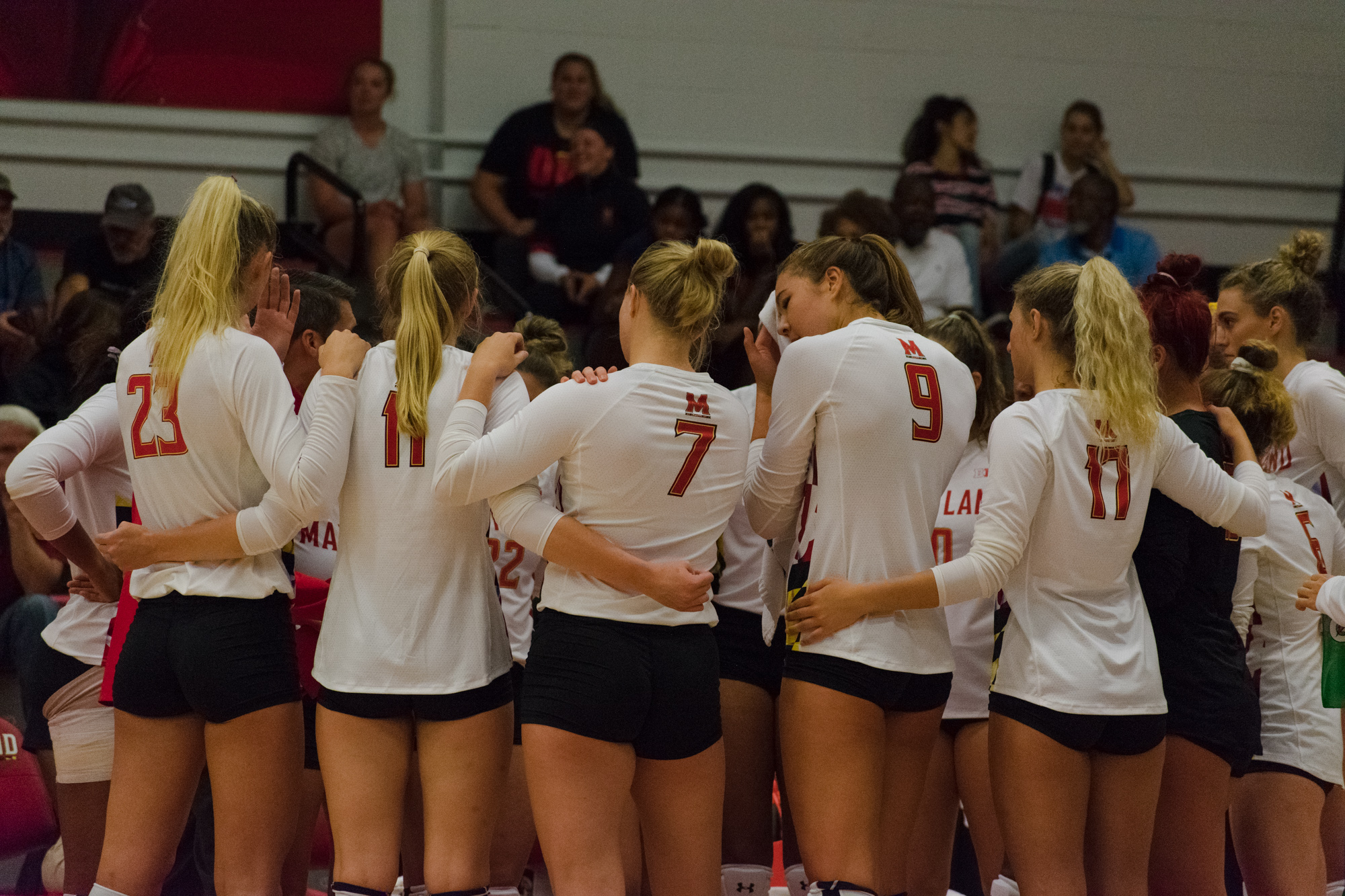 As Ohio State took the 29-28 lead in the third set of Maryland volleyball’s Saturday night match against Ohio State, the ball ended up in coach Adam Hughes’ hands, and he fired it toward the ball boy.

Frustration began to build for Hughes late in the third set because his team couldn’t put two points together to send the match to a fourth set, even after taking leads at 25-24, 26-25 and 27-26.

Instead, following the Buckeyes’ 29th point of the frame, a kill from Ohio State outside hitter Jenaisya Moore halted the Terps’ last gasp. Maryland was defeated in set three, and they lost the match in straight sets (18-25,18-25, 28-30).

“I didn’t think we started really well,” Hughes said. “We knew Ohio state would be really scrappy, but it was obviously a tough offensive night for us.”

[Read more: For Maryland volleyball’s Rebekah Rath, the Big Ten gauntlet has been a learning curve]

In the return to her home state of Ohio, middle blocker Katie Myers didn’t match her recent attacking pace. She entered the match second in the Big Ten in hitting percentage, but she posted zero kills on five attempts in the first set, and she finished with two kills and a .071 attacking clip on the night.

The Terps opened Big Ten play with a loss to Ohio State in September, and in set one Saturday, they had a similar lack of success against the Buckeyes. Maryland fell into a 9-4 hole, from which they were not able to recover, losing the set 25-18.

Myers and the Terps displayed similar results in set two. The 6-foot 2-inch redshirt sophomore added just one kill, and she hit .111 in the first two sets, down from her average of .429 on the season.

This time around, Maryland jumped out to an 11-6 lead. But after Moore led an 11-3 run for the Buckeyes, Hughes’ squad was unable to recover. Maryland dropped the second set 25-18 as well, and Moore was well on her way to her 19-kill, .395 hitting percentage performance.

The Terps kept it close in set three, and they pushed the frame past the 25th point. After Ohio State took the lead at 28-27, Hughes’ challenge was unsuccessful. And although Maryland knotted proceedings at 28 again, the Buckeyes closed out the set and the match.

“We kind of ran out of subs there in the end,” Hughes said. “It’s not really an excuse, but we just didn’t have a lot of options and we came up short.”

Outside hitter Erika Prithcard was the only Maryland player to find attacking success in the match. Pritchard finished the contest with 12 kills and a hitting percentage of .241 while the rest of the team hit .086 and combined for 20 kills.

And after setter Nicole Alford exited against No. 4 Wisconsin on Wednesday with an injury, it was Chloe Prejean and Samantha Snyder who split setting duties once more, combining for 25 assists.

Maryland has now lost nine straight sets, and the team will face two ranked opponents next weekend in No. 6 Minnesota and a rematch with the Badgers.

“This is the fight we all signed up for,” Hughes said. “We’re still crawling, and whether we win or lose, we need to get back to work and get better.”