No. 4 Wisconsin blows past Maryland volleyball in straight sets 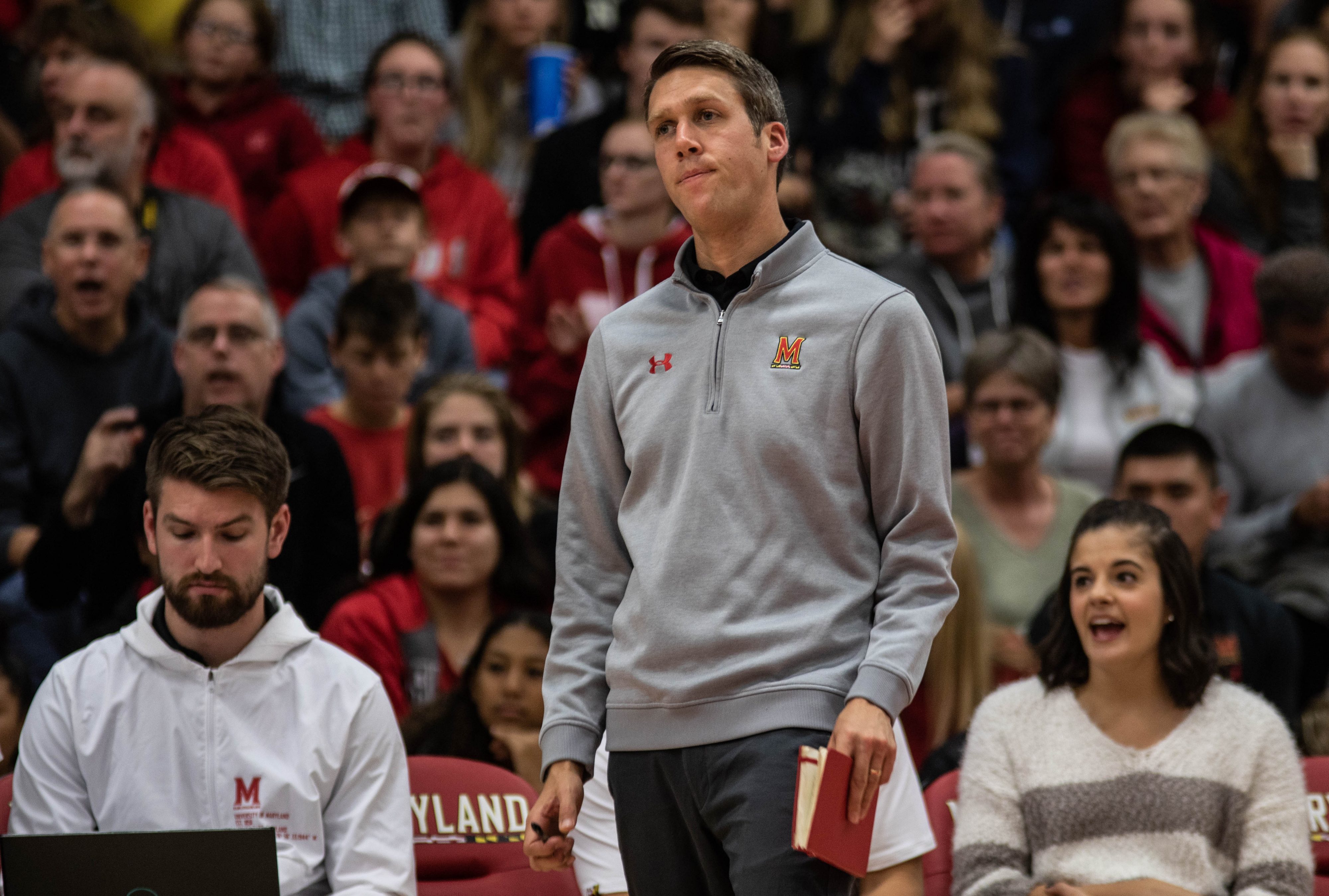 Maryland volleyball coach Adam Hughes during his team's 3-0 loss to No. 5 Nebraska on Oct. 19, 2019 at the Xfinity Center Pavilion. (Julia Nikhinson/The Diamondback)

With Maryland volleyball trailing by just one point midway through the third set, coach Adam Hughes’ squad came close to a breakthrough.

Outside hitter Erika Pritchard’s dink attempt avoided the two imposing blockers in front of her, but Wisconsin pin hitter Molly Haggerty laid out and saved the would-be kill from hitting the court. And once middle blocker Katie Myers sent another strike toward the Badgers’ side of the floor later in the rally, it was setter Sydney Hilley there to dig it out for Wisconsin.

The two standout defensive plays led to a kill from Haggerty, forcing Hughes to call a timeout and separating the sides for good Wednesday night. Maryland went on to lose in straight sets (21-25, 14-25, 20-25) to No. 4 Wisconsin on the road, pushing the team’s record against ranked opponents to 1-13 under Hughes.

The Badgers jumped out to a 4-0 lead in the first set, with Hughes burning the timeout after the lead swelled to 7-1. After the stoppage, Haggerty raced toward the stands to save a ball amid a long rally. And while the Badgers got the ball back over the net, middle blocker Rainelle Jones finished off the sequence with a crucial kill to narrow the deficit to three points.

Two-time All-American Dana Rettke was strong at the net through the game, using her 6-foot-8 frame as she notched a match-high 17 kills and .654 hitting percentage while stuffing four attempts.

Meanwhile, Hughes said in a mid-match interview with Big Ten Network that setter Nicole Alford suffered an injury in the second set, and she didn’t return for the final frame. In her stead, Chloe Prejean joined Snyder, and the pair combined for 18 assists.

The Terps stuck with the Badgers early in set two, but a 5-1 Wisconsin run with the score knotted at nine put the frame out of reach. Errors plagued Maryland down the stretch, and it mustered just five more points, dropping the frame, 25-14.

Rettke asserted her dominance in the final frame, putting away eight kills to propel her squad to a straight-sets win. And while the Terps held their own, keeping the set within a few points for most of the way, the Badgers’ power ended proceedings.

They notched their final five points off kills, putting away a Maryland squad that managed to hit just .158 in the match.

Wisconsin’s performance displayed the top-heavy nature of the Big Ten, a conference with more big fish than space in a little pond. And the Badgers’ clinical straight-sets sweep over Maryland on Wednesday continued a difficult season for Hughes’ squad, now sitting at 12-11 overall with plenty of powerhouses remaining on the slate.