Maryland football vs. No. 14 Michigan: How to watch and what to watch for 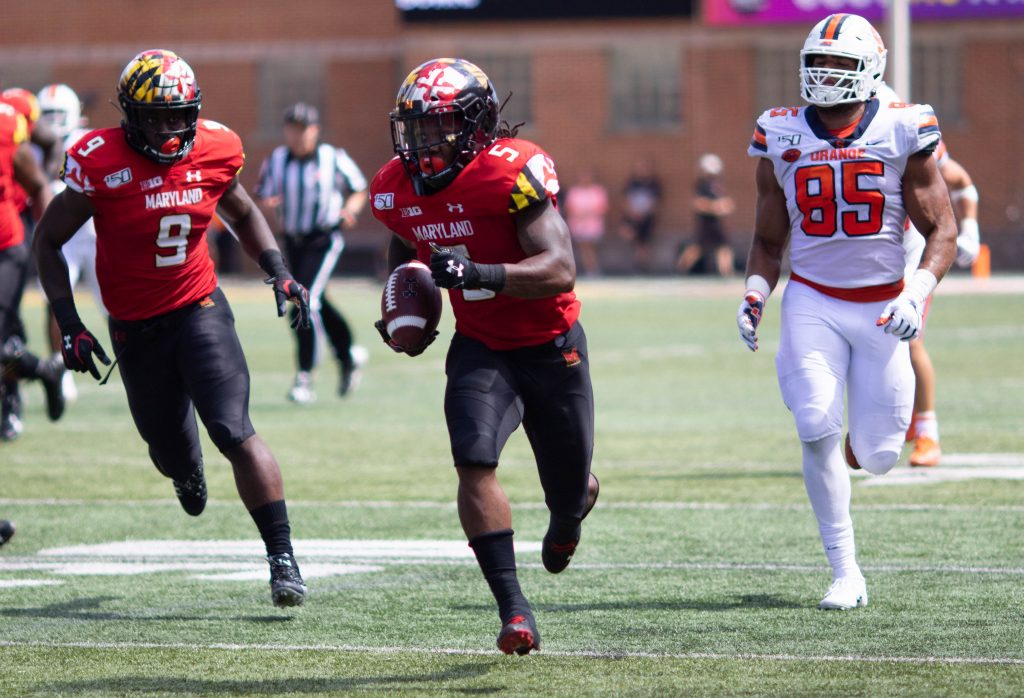 Running back Anthony McFarland streaks past the Syracuse defense in Maryland football's 63-20 on Sept. 7, 2019 at Maryland Stadium. (Julia Nikhinson/The Diamondback)

Things have not gone well for Maryland football, as they now sit at 3-5 having lost three straight games. One thing the Terps have to look forward to is the throwback uniforms they are unveiling for this matchup. The script helmets are back, along with the Boomer Esiason-era jerseys.

Maryland has had their fair share of victories on homecoming, winning each of the last three. Two of those have come with considerable margins, beating Purdue 50-7 in 2016 and Rutgers 34-7 last year. In between those came a 42-39 win over Indiana. Michigan is a far more formidable foe than any of the other three teams, but with a bit of luck, anything is possible.

One bright spot for Maryland this season has been the play out of the backfield. Both Javon Leake and Anthony McFarland have over five yards per carry, with Leake averaging over eight yards a rush. Tayon Fleet-Davis has also been effective, primarily out of the backfield in the passing game, having the second-most receiving yards on the team. If the Terps want to pull off the upset, they will need the backfield to have a huge game.

Three things to watch for Michigan

Gattis was reportedly hired to be Maryland’s offensive coordinator, after serving under Mike Locksley at Alabama. A few hours later, he was off to Michigan to take the reins of the Wolverines’ offense. There have been quips back and forth between Locksley and Gattis, so Gattis coaching in Maryland Stadium should be a big storyline.

Michigan’s offense was under a lot of scrutiny after a dreadful start to the season, including a blowout loss on the road to Wisconsin. Last week, the offense seemed to turn a corner in their 45-14 demolition of then-No. 8 Notre Dame. Haskins and Charbonnet — the Wolverines’ top two running backs — both had big games. Haskins had nearly 150 yards on 20 carries, while Charbonnet had nearly 75 yards and two touchdowns on 15 carries.

Michigan’s defense has proven time after time this year that they are not to be messed with. Even when they only scored 10 points against Iowa, their defense carried them to a win. The Wolverines are fourth in the Big Ten in total defense, only allowing 270.4 yards per game. They are also fifth in the conference in scoring defense, giving up just 18.4 points per contest. With Maryland’s offense sitting toward the middle of the Big Ten in both yards and points, Michigan could have a field day on the defensive side of the ball.