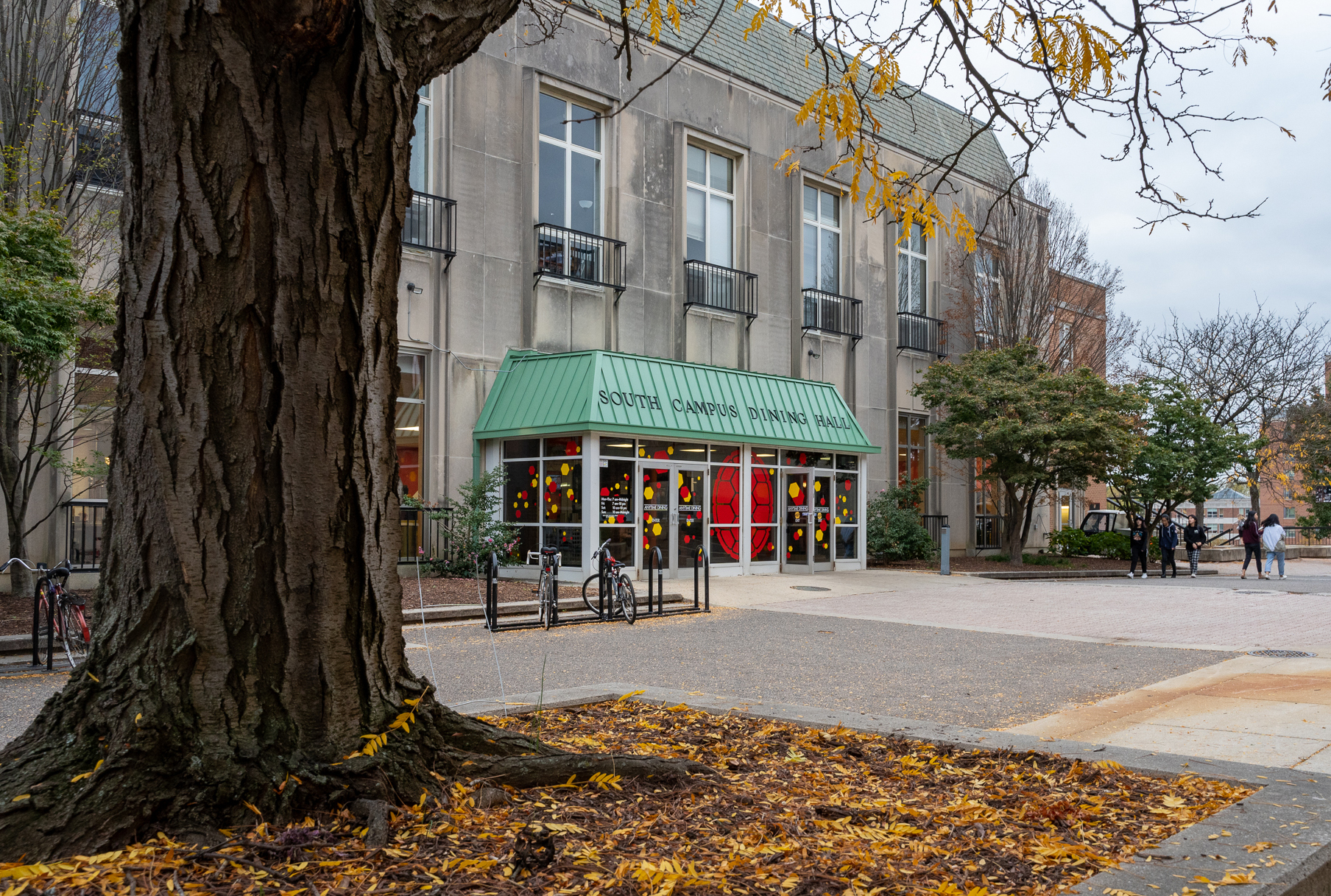 With multitudinous food stations that serve international cuisines, numerous Pepsi-product-only soda fountains and boxy machines that can squirt three different kinds of milk into your cereal bowl, it’s easy to get lost in the glitz and glamor of the University of Maryland’s dining halls.

I was star-struck when I first entered those hallowed facilities — the bastions of the college experience, with their endless buffets and inviting lighting. That is, until I got my food, spat my gum out into a napkin and stood up, ready to squirrel my chewed-up, dirty little secret away into the nearest trash can … only to realize there weren’t any in the vicinity.

Not inside the dining hall or directly outside of it. Not a single trash can to be found.

But why? Why are there no receptacles for students to discard their gum, the napkins they accidentally kept or the peel of the banana they finished as they breezed through the dining hall doors?

According to Dining Services spokesperson Bart Hipple, it’s because there’s no real need for them.

“Why would there be trash cans in the dining hall?” Hipple said. “What do we provide that you need to throw out before the end of your meal?”

Before 2016, when the university’s dining halls underwent radical changes for the implementation of Anytime Dining, campus dining halls were more like traditional restaurants: retail facilities where people came in to buy single food items for dine-in or carry out.

Back then, Hipple said, trash cans were scattered throughout the dining halls and the areas outside them; almost always full of disposable forks, paper cups, single-use boxes and other casualties of students’ ever-pressing need to eat, and to do so conveniently.

In the last two or so years of retail dining’s life span, Hipple said Dining Services removed the receptacles by the dining hall doors to prevent students from disposing of boxes they’d ravenously emptied before they walked out of the facilities.

As a result, students were less likely to throw their trash away in front of the halls when there were no trash cans there — garbage stopped collecting in the courtyards once the cans were nixed, Hipple said.

“We don’t know where it went, but it was not there,” he said.

With the implementation of Anytime Dining, retail dining’s reign came to a close. Dining Services eliminated its carryout option and roughly 6.3 million pieces of single-use product that might have otherwise met their demise in a landfill — as well as the trash cans that would have funneled the products there.

Which brings us to now, when all students see is the never-ending line of trays filing into oblivion, carrying our trash with them. What happens to all gum-filled napkins, half-eaten food, and discarded banana peels that make their way onto those trays?

“All trash goes to the dish room, where it is sorted to either recycle or compost, and there is very, very little that goes into the actual trash,” Hipple said.

The few trash cans that are in the dining halls, such as the one that resides beneath the coffee station in the South Campus Dining Hall, all have operational purposes, Hipple said. They aren’t necessarily for us students to throw things away, but for running the dining hall more smoothly.

Even with ecological impact in mind, the thought of another human being touching the paper towel I’d wrapped around my mint Extra didn’t sit well with me. My emphatic expressions of distress failed to sway Hipple, who merely shrugged and looked me in the eye when I brought up my horror over the gum’s fate.

Unlike me, sophomore Kaitlin White — who “couldn’t believe” she hadn’t noticed the lack of trash cans in the dining hall before we spoke — said she thought eliminating waste was a worthy reason for students to give up their right to rubbish receptacles.

“Waste disposal is a human right,” the physiology and neurobiology major said, thumping her fist on a dining hall table for emphasis. “But being environmentally friendly and efficient is just as important, if not even more.”

So I guess I — and every other student with a dining plan at this university — will continue to place our trash, and sometimes our dignity, onto those ubiquitous dining hall trays.