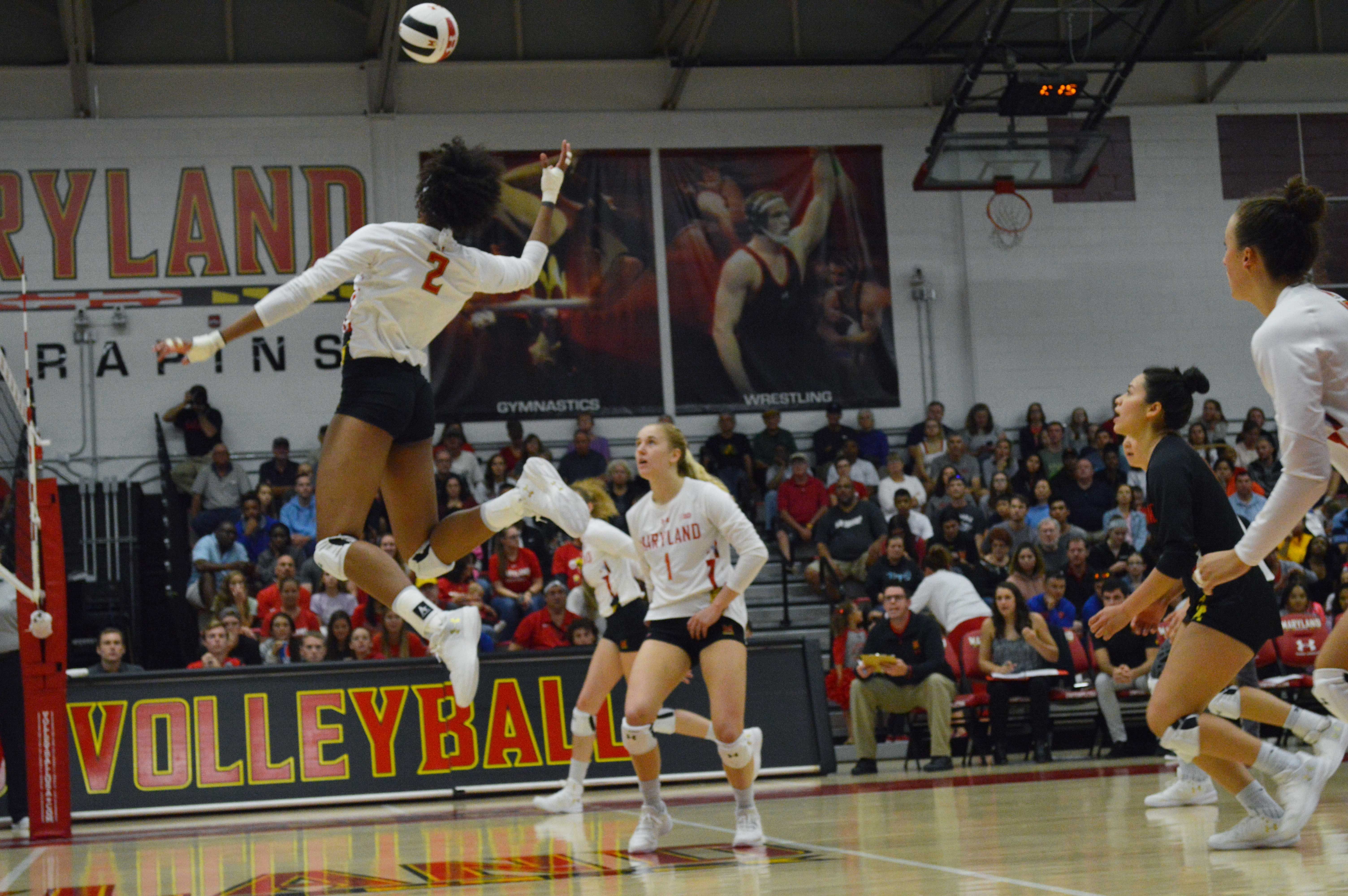 In the first set of Maryland volleyball’s match against Penn State on Saturday, middle blocker Rainelle Jones left the contest with a dislocated right index finger. While her production was limited the rest of the way, seeing her back on the court in the second set was a promising sign for her teammates.

The Terps were already depleted at middle blocker with freshman Cara Lewis sidelined through injury. For a team with just four middle blockers on the roster to start with, mounting injuries at the position will be tough to manage.

And Maryland will need all the help it can get Wednesday against No. 4 Wisconsin and 6-foot-8 middle blocker Dana Rettke. Before facing an imposing figure across the net, the Terps are hopeful that they’ll be at full strength to put up a fight against Wisconsin’s high-flying offense.

“They have two really good middles that we’ll have to contain,” coach Adam Hughes said. “I hope that Rainelle is not limited because she’s having a good year, and we want to keep going with that.”

Middle blocker Katie Myers has been a force for the Terps so far, leading the Big Ten in blocks while posting the second-best hitting percentage. But Hughes’ squad needs the depth Jones has provided so far — she’s second for Maryland with 86 blocks — to compete with a Badgers team that’s still undefeated in conference play.

Jones’ teammates value her presence on the floor, too. However, if she’s not able to give 100 percent against Wisconsin, they are prepared to step in and assist.

“Knowing that I can help with blocking, I think I’ll be able to help her out,” outside hitter Erika Pritchard said.

No matter what it looks like on Maryland’s side of the net, the Badgers will have firepower waiting for them, including Rettke. The Riverside, Illinois, native was named a first-team All-American in each of the last two seasons, and she led Wisconsin with 3.74 kills per set in 2018.

Rettke comes into Wednesday’s matchup third in the Big Ten in both hitting percentage and kills per set. Though she missed two recent matches with a foot injury, Rettke returned on Sunday and notched 15 kills in Wisconsin’s win over Michigan.

“[Rettke] kind of anchors their team,” Hughes said. “She’s an exceptional player and she really brings a lot of size and physicality to them.”

[Read more: Maryland volleyball can’t get going in 3-0 loss to No. 8 Penn State]

Last season, Maryland lost to Wisconsin in straight sets in their only meeting of the campaign. But the Terps were pleased with how they handled the All-American; they held her to just seven kills and a .115 hitting percentage.

To prepare for Rettke’s height, Maryland’s hitters have purposely lined up against a practice player who’s about the same size, practicing to find clean looks around his reach. This year, the Terps hope to replicate their past success against Rettke and turn it into something positive on offense.

“I think that we managed her really well last year,” Pritchard said. “We’re going to have to do the same thing this time around.”

The Terps understand they may not have what it takes to silence Rettke, particularly if they’re without Jones. However, building off last season’s success, Maryland is gearing up for the prospect of facing one of the Big Ten’s top players.

“She’s the type of player where you could do everything right, and it might not make a difference,” Hughes said. “But the group is excited for a challenge.”