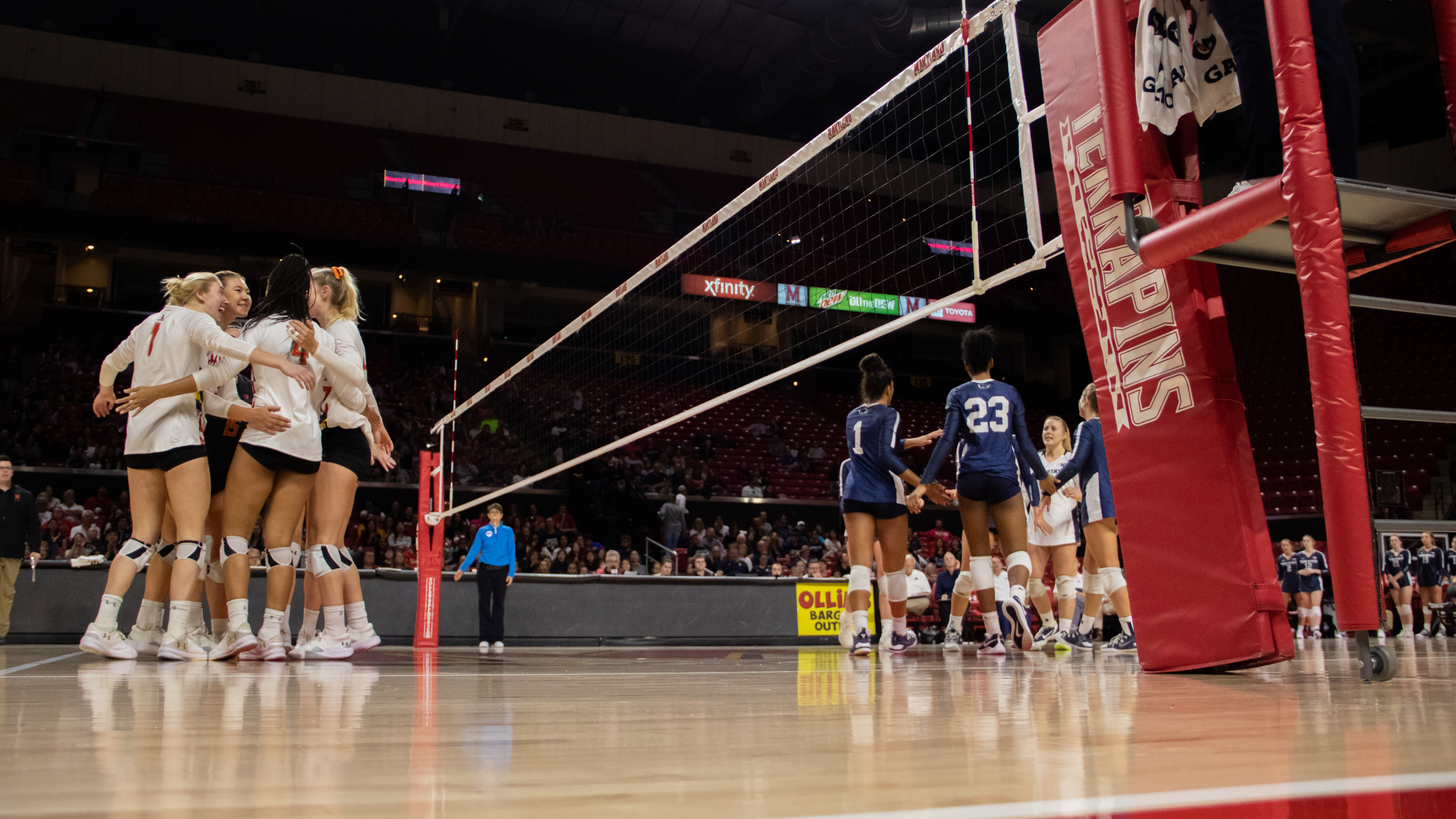 Both Maryland volleyball and Penn State huddle on their respective sides in the Terps' 3-0 loss to the Nittany Lions on Oct. 26, 2019. (Cam Andrews/The Diamondback)

Facing match point in Maryland volleyball’s Saturday night match against Penn State, outside hitter Rebekah Rath rose up on the left side for a kill attempt. She was blocked by a pair of Nittany Lions — the second straight stuff from Penn State’s middle blockers.

The Nittany Lions’ suffocating defense had gotten them that far, and they finished things off with more dominance. The unit held the Terps to a team hitting percentage of .174, preventing any Maryland player from reaching double-digit kills in the straight-sets win.

The Terps failed to get anything going offensively on the main court of Xfinity Center. In a match where Maryland was looking to earn its stripes in the Big Ten, Penn State’s defense overwhelmed early and often, proving to be too much for coach Adam Hughes’ squad.

“We know they’re a good team, and they have one of the best liberos in the country,” middle blocker Katie Myers said. “Historically, they’re a great defensive team, so we need to keep swinging when that stuff happens.”

[Read more: Maryland volleyball can’t get going in 3-0 loss to No. 8 Penn State]

Myers understandably took notice of libero Kendall White, who currently sits fifth in the Big Ten in digs per set and finished the match with a game-high 12 digs. White was the anchor of the Nittany Lions’ back-row defense, and Maryland struggled to get anything around her.

“They did do better defensively compared to us,” middle blocker Rainelle Jones said. “Personally, I couldn’t get the ball down.”

The Nittany Lions recorded seven more digs than Maryland, and their attack supplemented the effort with a .291 hitting percentage.

Although the Terps’ defense wasn’t running quite as smoothly as Penn State’s, Hughes’ squad was more concerned with its offensive output.

In its first meeting with the Nittany Lions on Oct. 11, Maryland hit .273 as a team — higher than Penn State hit. Though they expected the Nittany Lions to adjust after the last match, the Terps were still disappointed they couldn’t get anything down.

“We took some OK swings at times, and they were still keeping the ball alive,” Hughes said. “We weren’t good enough offensively to score in the middle.”

Maryland pushed Penn State to five sets in the first meeting on the back of its ability to find openings for kills. But Saturday, the Nittany Lions tightened up, and the Terps couldn’t string together points.

“We are a good team when we play really well,” Myers said. “We know the things we need to improve on, so we’ll have to come in with the right mindset during practice.”

Maryland was hoping to come out of Saturday’s match showing they are a force to be reckoned with in the Big Ten. And with seven matches remaining against ranked opponents, plenty of opportunities to do so remain.

But Hughes and his team were disappointed they couldn’t prove themselves against Penn State and its formidable defense.

“This was a big match for us, because we wanted to show that we can stand at this level,” Hughes said, “and that wasn’t the performance that we needed.”