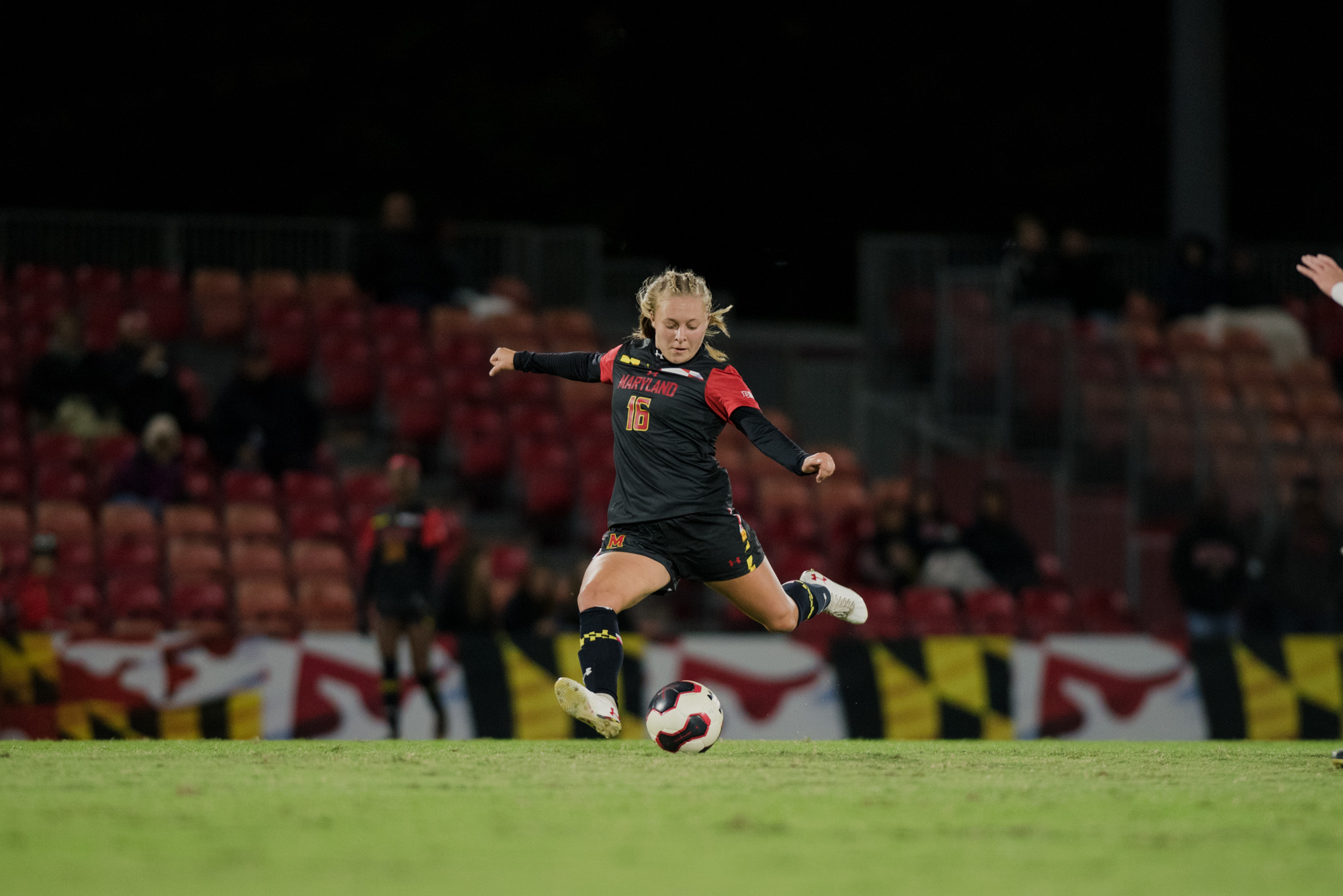 Malikae Dayes stood over a free kick well inside her own territory during Maryland women’s soccer’s match against Michigan State.

The defender launched the free kick past midfield, finding the head of forward Alyssa Poarch, who flicked the ball forward to meet the run of Loren Sefcik. And Sefcik made her run count, weaving in between two Spartans defenders and shooting the ball into the bottom left corner of the goal.

Sefcik’s strike was enough to put her team in the win column for a 1-0 victory, securing Maryland a spot in the Big Ten tournament for the first time in school history.

“It’s hard to explain,” coach Ray Leone said. “The four-year journey with my seniors, I couldn’t be happier for them. They’ve been through so much, and for them to come full circle of one year winning one game in the [conference] and now to be in the Big Ten tournament is amazing.”

[Read more: A road win is all that separates Maryland women’s soccer from the Big Ten tournament]

The Terps came into Thursday’s matchup on the heels of defeating Purdue, 2-1, for their first comeback win of the season. The victory moved Maryland up to sixth place in the Big Ten, good enough to hold a spot in the tournament for the time being.

The Terps knew they needed a win to clinch their spot, and Leone’s squad got the job done on the road — where Maryland had struggled this season — with one game remaining.

Michigan State began on the front foot, though, as Paige Webber’s shot from inside the box went wide left in the 12th minute.

Maryland responded, sending forward Mikayla Dayes through on the near side of the field with space. Dayes took the shot early, trying to curl it by goalkeeper Lauren Kozal. The ball didn’t have enough power on it to get around the keeper, though, and the Terps continued to push forward.

Both squads traded opportunities in the opposing half of the field, but shots were scarce as defenders were quick to close down any chances that made their way inside the box.

Maryland found its best chance in the 30th minute, and the team did not waste it. Sefcik slotted home her second goal in as many games to put the Terps ahead.

“It was a phenomenal goal,” Leone said. “I thought it was completely against the run of play. We were on our heels and just one little thing happened and we got in.”

The Spartans were unable to respond before the end of the half, leaving the score at 1-0.

Maryland was quick to find a chance in the second half, as Poarch forced an early save out of Kozal. Michigan State retaliated instantly, getting forward Camryn Evans through on the counterattack. The shot was saved by Erin Seppi, the reigning Big Ten Goalkeeper of the Week.

The Spartans began to settle into the match, but the offsides flag proved to be their biggest enemy on the night. One call from the line judge whistled Evans offside despite the ball deflecting off Malikae Dayes, potentially saving the Terps from conceding.

And Michigan State conjured up another chance when midfielder Danielle Stephan narrowly missed an opportunity to level the game in the 75th minute on a free kick. The shot curled toward the top-right corner and just smacked the lower part of the crossbar to maintain the Terps’ clean sheet.

Then, forward Gia Wahlberg threatened as she sat alone at the back post. Her shot went straight into the side netting, though, continuing the frustration for the Spartans attack.

But in the end, the Terps held off the onslaught of Michigan State chances to win the match and become the first team in program history to secure a place in the Big Ten tournament.

“It’s so hard to do something first anymore in this world, so many things have been done,” Leone said. “Us joining the Big Ten conference, they can put their name in the books forever, that they were the first team to get to the tournament. That matters.”