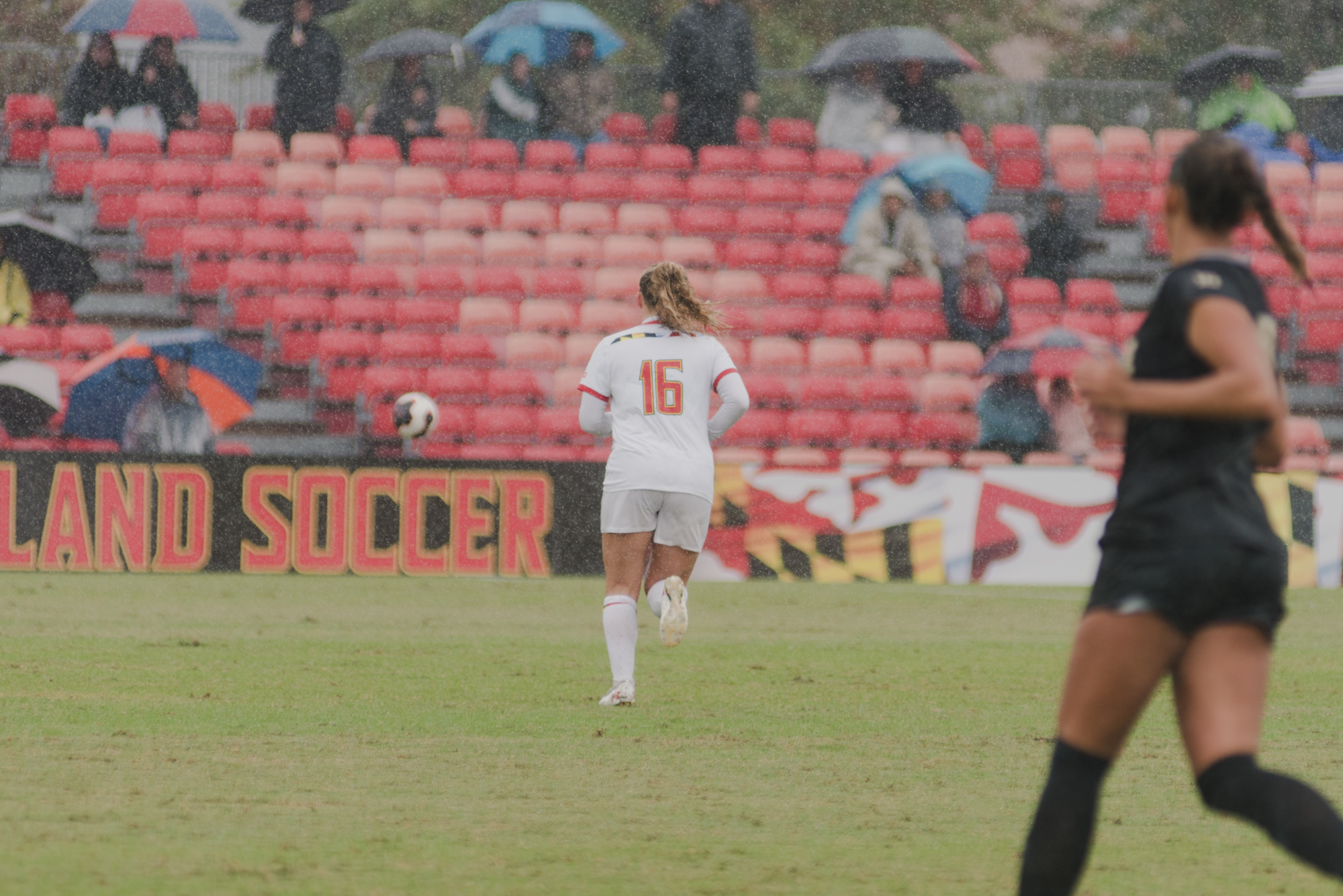 Maryland women’s soccer was in the same situation for the fourth game in a row: already in the second half and unable to score a goal.

The Terps had played over 370 minutes without scoring. And on Sunday, having already conceded in the first half of a rainy game, their recent form looked likely to ruin any hopes of earning their first berth to the Big Ten tournament.

But with midfielder Loren Sefcik’s 64th minute goal, the dam seemed to break, and forward Mikayla Dayes finished the deal about 20 minutes later. For the first time this season, the Terps came back from a deficit earning a 2-1 win over Purdue.

Now, as coach Ray Leone’s squad heads into its final two games, the Terps have proved they can put together a strong second half when their backs are against the wall.

“It’s a different mentality,” Leone said. “They didn’t have it in previous games.”

The Terps have prided themselves on scoring early, finding goals in the first 10 minutes of five games this season, all of which resulted in wins. But until Sunday, the team was unable to win when down a goal.

During its three-game scoreless run, Maryland saw a similar script. The team would attempt to apply early pressure but couldn’t score, allowing the other side to take control and put the Terps on the backfoot.

Against Nebraska on Oct. 11, Maryland conceded in the fourth minute and never found its way into the game. And when the Cornhuskers put up their second goal of the match, the Terps found themselves in too deep a hole to dig out of.

Two days later, they went down early against Iowa and couldn’t come back, falling 4-0 to the Hawkeyes.

“When it’s not going well and you’re down one, just hang on and don’t go down two,” Leone said after the Iowa game. “Our team has to grow in that area. It’s not out of hand at all, but when you get down two, you think of the mountain ahead of you.”

[Read more: Maryland women’s soccer racks up 21 shots but can’t break through in 0-0 draw with Indiana]

On Sunday against Purdue, Maryland was put in a do-or-die situation, with a loss or draw hurting its chances at making the Big Ten tournament. The Terps had the added pressure of a relentless downpour throughout warmups and the match.

Almost on cue, the Boilermakers scored in the first half, lowering the odds that Maryland would win and pick up a key three points. But a halftime conversation helped shift the intensity the team went out with in the second half.

“We talked about how our mentality has to change, and we have to score because we are not ending the season now,” Sefcik said. “We came in strong in the second half and when we got our first goal we got the mentality moving and were pushing for the second one.”

Sefcik opened up the scoring for the Terps in the 64th minute, with a turn on the ball before rocketing a shot past the goalkeeper. The sophomore has been a workhorse for the Terps this year, primarily by creating chances rather than taking them. But putting Maryland on the board made all the difference.

“She smoked that shot,” Leone said. “She hit it so clean. I was happy for her because she’s not gotten a lot of looks. She’s really the setup player. So for her to get that moment, and to take it, was fantastic for us.”

After Sefcik’s goal, Leone said his squad matched its performance against Rutgers, an efficient 2-1 win over a ranked Scarlet Knights team on Sept. 28.

Weeks later, the Maryland attack kept pushing the Purdue backline and eventually found its game-winning goal through an assist from forward Alyssa Poarch and Dayes’ finish.

“We talked about who wants it more, and I think we were the team that wanted it more,” Dayes said.

Poarch, the team’s leading goalscorer, took the ball from midfield to the opposing box, fooling her defender with tricky dribbling before squaring the ball up for Dayes to finish.

“Great, unselfish play,” Leone said. “To fight from midfield and go that far, and get all the way in, only Alyssa can do that. And then to take that last touch, look up and find her buddy on the backside. We’ve been trying to score that goal all year.”

The Terps secured three points and put themselves one win away from a Big Ten tournament berth, while putting together their best second-half performance of the season. They will be on the road for their last two matches against Michigan State and Michigan.

Maryland hasn’t been living for its away performances, holding a 1-4-1 record when away from Ludwig Field. But after proving its mettle with a second-half comeback against the Boilermakers, the team has a chance to extend its season for the first time in the Big Ten.

“We’ve got to talk about that a little bit,” Leone said. “And say, ‘You know what, let’s bring a different attitude.’ We didn’t bring our Ludwig attitude to Nebraska and Iowa, they all know it. Let’s bring it to this Michigan trip and see if we can get a spot in the tournament.”