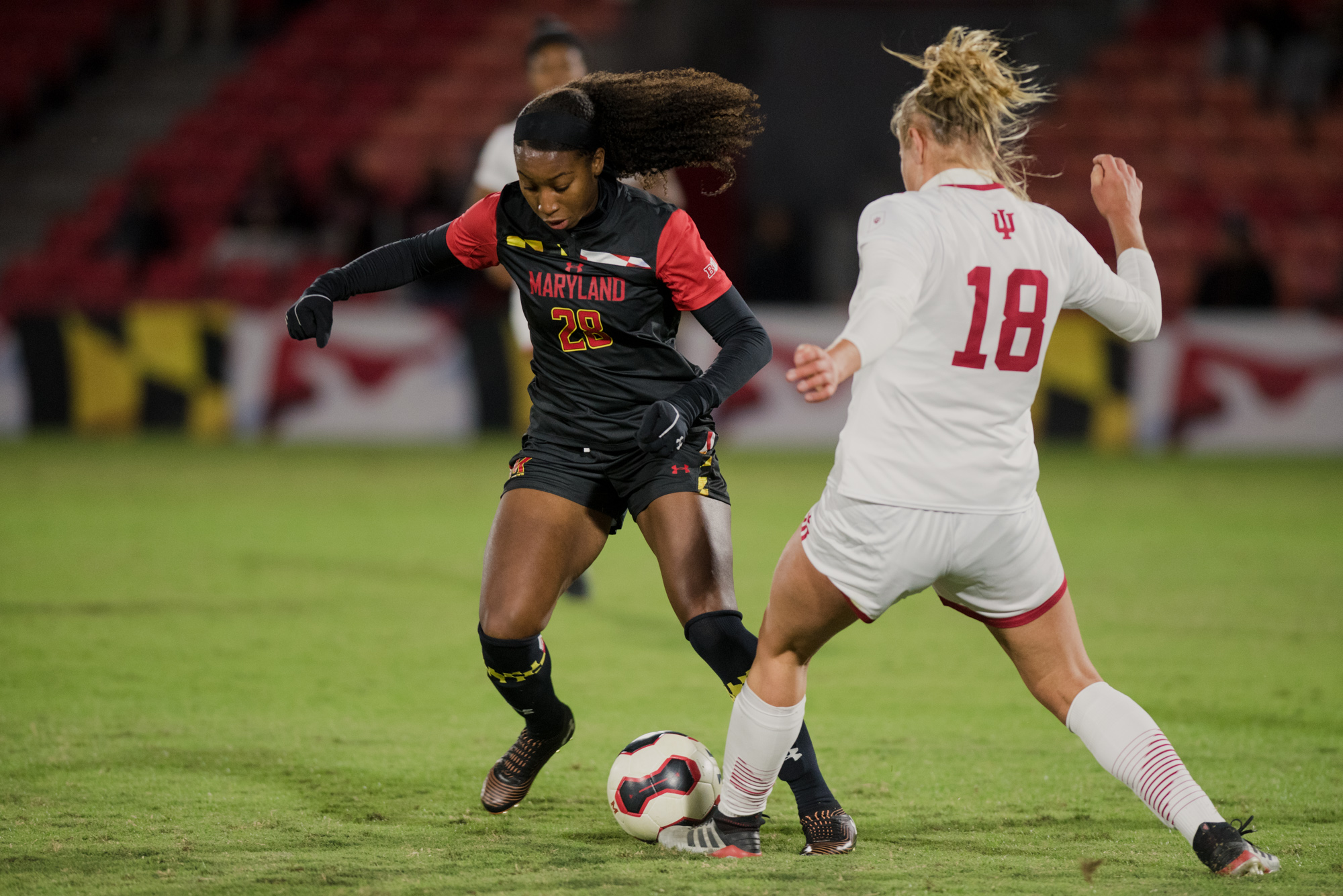 Mikayla Dayes had the ball 20 yards outside the box deep into Maryland women’s soccer’s match against Indiana before a horde of Hoosiers surrounded her in seconds.

She was able to maneuver around one defender, but no number of moves was going to keep Indiana from dispossessing her.

For much of Thursday’s 0-0 draw with Indiana at Ludwig Field, that midfield dribbling was a scene seen time and again. And despite a flurry of attempts — the Terps took 21 shots — just four were on target to test Hoosiers goalkeeper Bethany Kopel, a ratio that surmounted into Maryland’s third straight scoreless game.

“I’d say it’s a fair result for both teams, it was an interesting tactical game,” coach Ray Leone said. “It took a little bit of grit for us to hang in there, … but I can’t be disappointed in our performance at all.”

[Read more: With Big Ten tourney in its sights, Maryland women’s soccer has another hurdle to conquer]

Maryland looked to bounce back from two poor performances against Nebraska and Iowa on the road. It fell to the Cornhuskers, 2-0, and the Hawkeyes, 4-0, hurting its prospects at finding a spot in the Big Ten tournament.

Alyssa Poarch found the first chance of the game in the seventh minute, when a hole in the Hoosiers’ defense opened up. The Terps’ top goalscorer fired a shot on frame, forcing a diving save from Kopel.

Poarch struggled to get into the game from then on. Poarch, who normally plays up front, migrated over to the wing for most of the first half.

“[We were] trying to give her some more space,” Leone said. “She did a good job just trying to get the ball, but they were spying on her everywhere. We’ve got to keep them off balance where we put her in different games.”

[Read more: With unrelenting pressure, Iowa and Nebraska beat Maryland women’s soccer at its own game]

The contest slowed down after the opening 10 minutes — as is typical for the Terps. But the defensive style of Indiana broke down play even further.

The Hoosiers kept most of their players back in their own half, even when their attack moved upfield. The wall of Indiana players became a struggle for Maryland to move through, keeping the Terp offense cold for the middle part of the game.

“We had a lot of shots tonight, we just need to focus on putting them on target,” Poarch said. “I give credit to Indiana’s defense, they played well tonight and didn’t allow us to do that.”

Substitute Kaylee Kozlowski found one of the best opportunities of the opening half in the 43rd minute, getting possession on the far end of the box and rocketing a shot that went just over the bar.

The score was level at halftime, with the Terps just edging the Hoosiers in shots, nine to seven.

“It was definitely weird going into the game because they do play five in the back,” Poarch said. “So just figuring out how to work through the gaps and get into attack and beat them was a challenge tonight.”

The second half played out similar to the first, with both teams sticking to their respective styles of play. The ensuing play resulted in constant ping-ponging of possession for the majority of the half.

The Terps found a slew of opportunities in the 77th minute, as a cross into the box found the head of Poarch, but the shot bounced wide left. Just after Poarch’s attempt, Emily McNesby ran free on the near side of the pitch and took a shot at goal, but the chance was over the bar.

After earning a corner kick on the following goal kick attempt, Jlon Flippens almost got on the board with a shot from outside the box. Her shot once again went over the bar, though.

“We just had to be calm and wait for our opportunities to come so we could push the ball through and try to score,” defender Malikae Dayes said.

Indiana nearly responded with a goal of its own, as midfielder Melanie Forbes received a cross right in front of an open net, but the shot was off-target, saving the Terps for the moment.

Midfielder Loren Sefcik took a shot with two minutes remaining that looked out of reach for the Hoosiers keeper. And Indiana defender got to the ball in time, though, clearing it off the line.

The second half finished without a goal, setting up overtime for Maryland. It was the third time the Terps and the Hoosiers have gone to overtime in their five meetings since Maryland joined the Big Ten.

Indiana won three early corners in the first overtime period, but the Hoosiers were unable to capitalize on any of their opportunities.

Both teams showed off more energy than they had toward the end of the second half, but neither one is able to find the back of the net and end the game, bringing Maryland to a second overtime period for the fourth time this year.

In the second overtime period, Poarch found the best opportunity early on with a free kick from 20 yards outside the box. The shot was on target, but Kopel was able to get to the ball easily. The game ended 0-0, as the Terps offense was held scoreless for the third straight game.

“That’s the conversation tomorrow after we wrap up this game,” Leone said. “We’ve got to find a way to get a goal, because a tie’s not enough.”