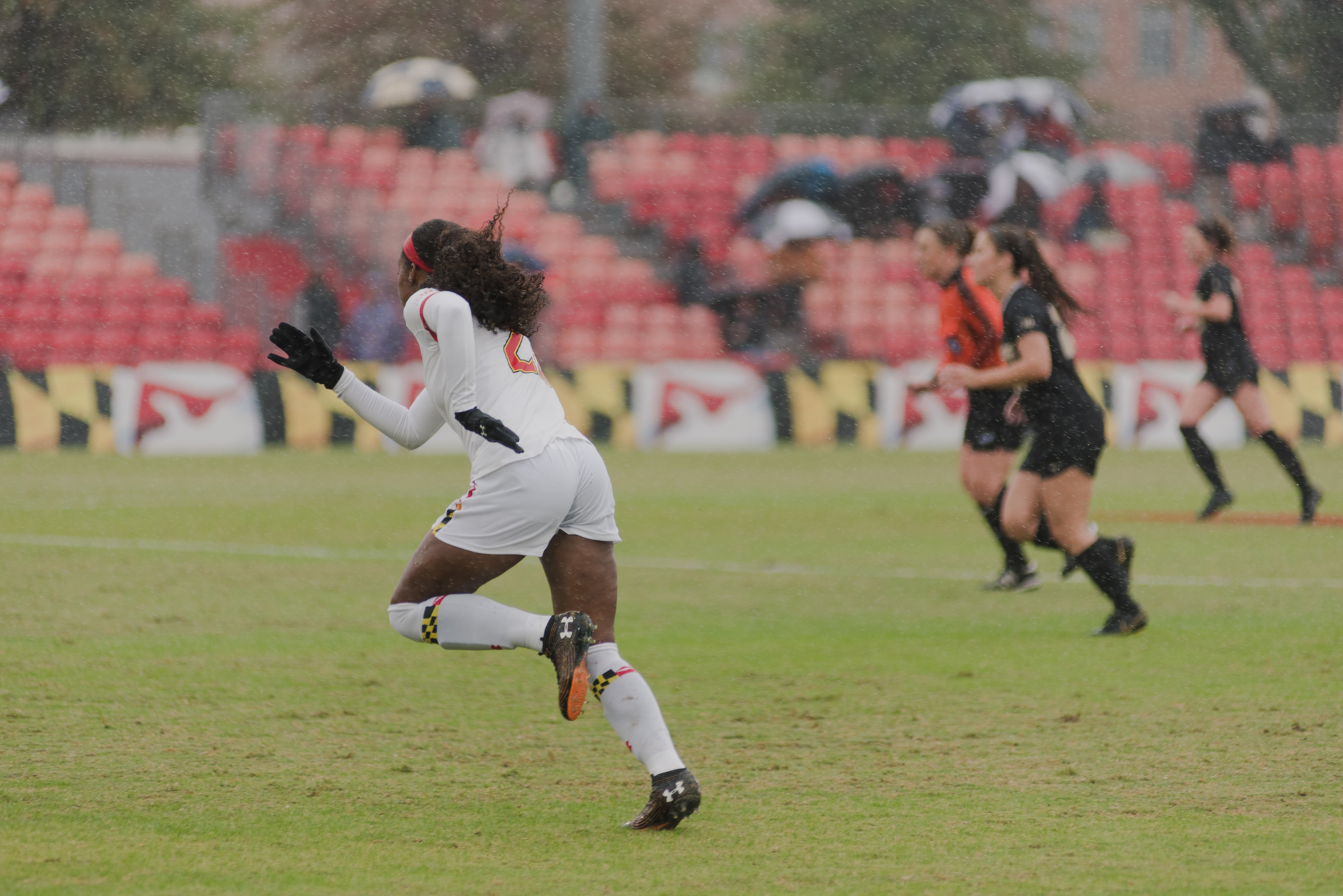 For much of the first half Sunday, the Maryland women’s soccer team struggled to create meaningful opportunities at goal against Purdue, with the downpour dampening much of its attack.

But, the Terps looked used to the rain by the time Loren Sefcik turned on the ball, leaving her defender in the dust and rocketing a shot past goalkeeper Marisa Bova.

Sefcik‘s 64th-minute goal helped Maryland earn an important victory in their final home game of the season, beating the Boilermakers, 2-1.

“Amazing,” coach Ray Leone said after the game. “I’ve never seen them reach down that deep. We’ve played hard in a lot of games. But not like that, that was another level in that second half. And in these conditions, that’s the only way you’re going to win this game.”

This was a must-win game for the Terps to stay in the conversation for a Big Ten tournament berth. With a less-than-stellar away record and two tough games against Michigan and Michigan State, three points would be a comfort for Maryland.

Forward Kaylee Kozlowski tried to sneak in an early goal in the second minute, taking a floater shot from well outside the box. Bova was able to track down the ball and make a jumping save.

Purdue almost opened up scoring in the eighth minute off a mistimed sliding tackle from defender Malikae Dayes, opening up the far side for forward Leanna Rebimbas. Goalkeeper Erin Seppi attempted to box her out, but slipped on the turf, appearing to leave an open net.

Rebimbas’ shot lacked power, though, allowing Alexis Hogarth to run in and clear the shot off the line to save the Terps for the time being.

But the Boilermakers still got on the board first, finding the opening goal in the 25th minute. Rebimbas sent a ball through to Sarah Griffith, who finished a shot into the bottom right corner.

Midfielder Hope Lewandoski looked to respond right after the Purdue goal, getting open on the near side of the field. Forward Alyssa Poarch’s header dropped in front of Lewandoski, but her shot on the volley went well over the bar.

Shots were hard to come by for the rest of the half. Maryland was able to notch two, but the Boilermakers couldn’t get anything going, maintaining their 1-0 lead into halftime.

“We can’t fool around,” Leone said about the Terps‘ changes at halftime. “The conditions are so bad, we’ve got to play more direct. Just try to get one good ball in, get one good foul, anything can happen. They just fought and broke the ice.”

Early parts of the second half saw much of the same, with Hogarth notching the sole shot in the first 15 minutes of the half. Fighting for 50-50 balls dominated the early stages, with neither team being able to capitalize on their ball possession.

The Terps started pushing their attack forward in the 63rd minute. The best chance of the game at that point came when forward Keyera Wynn sent a cross to forward Mikayla Dayes right in front of goal. Dayes’ attempt was blocked by a Purdue defender, though.

The ball stayed in the Boilermaker half, which allowed Sefcik to set up outside the box to turn and fire at goal, bringing Maryland level.

“We need to frickin score,” Sefcik said, recalling the goal. “When I saw that ball come to me, I was determined to turn and shoot it.”

The Terps offense began to pick up, taking more possession and finding more chances. Finally, in the 84th minute, Alyssa Poarch fooled her defender on the near side of the pitch, finding space to square the ball to Mikayla Dayes who put the ball into the bottom left corner of the goal, putting Maryland up late in a tense game.

The Terps had to hold Purdue scoreless for just five minutes to earn a key victory, but the Boilermakers didn’t make it easy, earning a free kick in the last 10 seconds and placing the ball right in front of goal. However, Maryland cleared the ball from any danger and held onto its win.

“Now they saw something in themselves that I don’t think they’ve ever seen that desire,” Leone said. “That was an extraordinary team performance and I felt the energy from the whole group.”