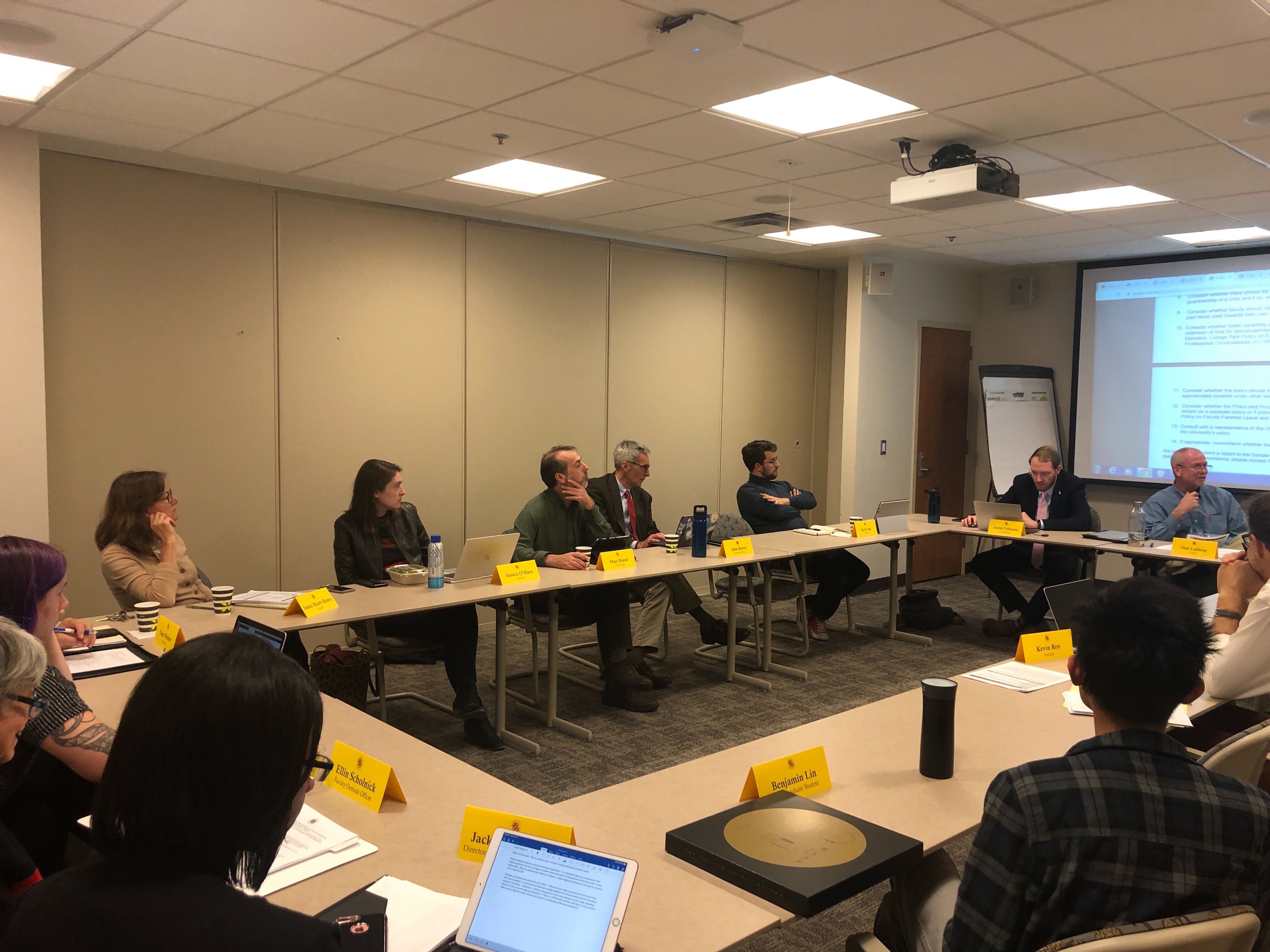 The University Senate’s Faculty Affairs Committee reviewed the University of Maryland’s interim parental leave policy — which now requires the university to provide 12 weeks of paid leave — at its meeting Monday.

The policy was implemented last month after the state of Maryland passed a parental leave law that increased the time institutions are required to give state employees. The law, which passed in June, makes parental leave 60 days, roughly 12 work weeks, while requiring that time off to be taken consecutively.

In order to comply with state law while the University Senate was out of session, administrators composed an interim policy that university President Wallace Loh approved. Now, the senate is working to solidify recommendations for a formal policy by February, said Sarah Hughes, the committee’s coordinator.

The part of the policy that was most-debated among committee members was whether to change a parent’s eligibility for leave based on their child’s age. It falls in line with the previous policy, which also only applied to parents of newborns adopted children or foster children under 6.

Dan Lathrop, the committee’s chair, said he suspects the reasoning behind these criteria is that most students of at least high school-age require less day-to-day attention than young children.

Marc Pound, a research scientist in the astronomy department who serves on the Faculty Affairs Committee, questioned whether an age limit for foster children or children under legal guardianship would be fair, considering that some children could require extra care and attention, such as those who have special needs.

“Maybe they’re 15 years old, but they have the cognitive capacity of a 6-year-old,” Pound said. “I think it’s dangerous to put numbers on this.”

Hughes, who presented the changes, said the committee is still in the process of gathering information on the policy to determine if there should be any changes before finalizing it in the senate.

“We’re taking in all of that information and learning more about the state law and the other policies that this might impact,” Hughes said. “We will be taking all of that into consideration, before we get to the point of making a decision on whether to remove that from the policy or change the age limit.”

Before the new law, faculty could be required to use their accrued sick leave as their parental leave, said John Bertot, Loh’s representative at the meeting. Bertot discussed how this practice essentially labeled adding a family member as an illness.

“If you did get an illness later, you no longer had leave that you could use,” Bertot said.

Interim policies are common when state or federal law changes since formal policies can’t be developed until the new law is released, according to Hughes.

“After a change in law, the University and the University System of Maryland (USM) need to quickly assess whether the law affects University or USM policies and whether existing policies align with the new law,” Hughes wrote in an email. “The University can’t pursue changes in policy until after the state or federal law is approved, since we need to be able to assess exactly how the law is changing in order to understand the impact on the University.”

After the committee presents the policy by the February deadline, it will pass to the Senate Executive Committee and full senate for a formal vote.