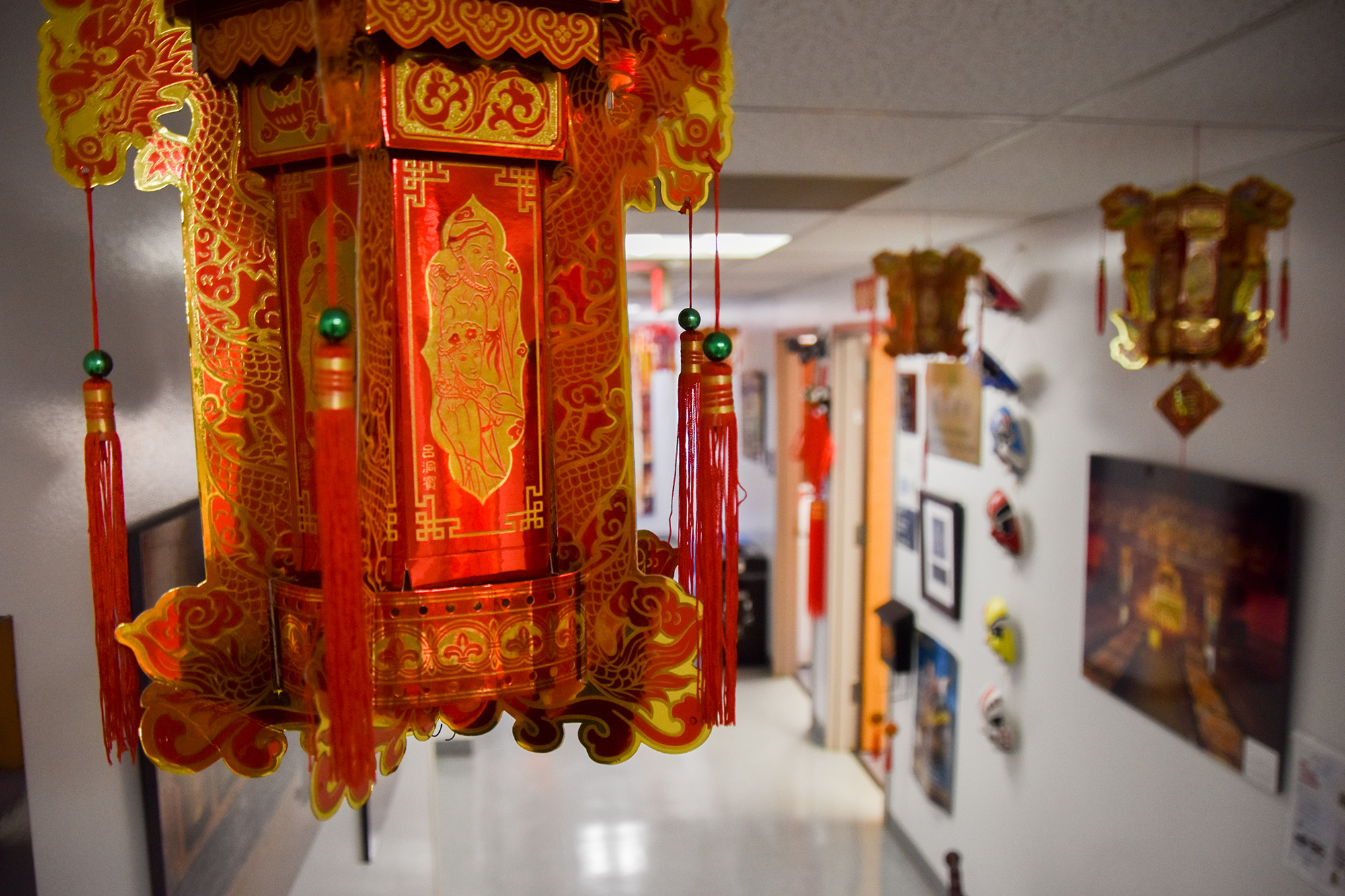 The university is required to report interactions with numerous entities tied to foreign governments, including the university's Confucius Institute, a Chinese language and cultural education center that's come under scrutiny over concerns about Chinese propaganda. (Joe Ryan/The Diamondback)

The University of Maryland’s Confucius Institute occupies a narrow hallway on the fourth floor of Susquehanna Hall. It’s hard to miss — bright red Chinese lanterns hang from the ceiling, and the walls are covered in artwork and photos.

While there are Confucius Institutes across the country, this university’s — which is celebrating its 15th anniversary this year — was the first. It’s a Chinese language and cultural education center that its teachers and students say is helpful to their understanding of the society. But now, it’s also under scrutiny from the federal government and university officials.

“We are very open,” said the center’s Chinese teacher, Jasmine Liu. “We have nothing to hide.”

Late last month, the federal Department of Education sent a letter to university President Wallace Loh announcing it would investigate whether the school reported foreign gifts and contracts in accordance with federal policy.

Among a host of other information requests, the letter mandates that “all records of, regarding or referencing” the Confucius Institute since Jan. 1, 2010 be turned over to the government within 30 days. University spokesperson Natifia Mullings wrote in a statement that the university will “continue to work with federal officials in a transparent and timely manner to resolve these issues.”

The Confucius Institute functions as a partnership between the Chinese government and this university, who divide the funding. It aims to promote Chinese culture through events on campus, working with the university’s Chinese department and other groups, said its coordinator, Rebecca McGinnis.

Confucius Institutes across the country, though, have faced funding difficulties and pressure from lawmakers over concerns about Chinese propaganda and national security risks. For years, academics have accused the Chinese government of using these institutes to boost its image abroad and censor dissenting views.

In the past two years alone, at least 20 Confucius Institutes have shut down — one of which was at Texas A&M University, one of the four other universities also investigated by the federal government for its reporting of foreign gifts this year.

McGinnis has been with the center since the beginning. She remembers when, in 2004, then-university president Dan Mote signed the initial agreement to create what would eventually become the institute.

“It started as a piece of paper in a small room,” McGinnis said, outlining a rectangle one-third of the size of her office. “It’s been interesting seeing this grow.”

The main gap the institute fills is by providing not-for-credit Chinese classes, Liu said. She said she teaches about 18 classes with 30 total students a week.

Most of them aren’t university students, she said. They range from elementary school children to adults working full-time jobs.

“It’s amazing to me that we’ll have people who are working full-time and still want to learn a language,” she said.

Nico Eidson, a chemical engineering doctoral student, is taking a Chinese introduction class at the Institute this semester. His wife is Chinese, he said, and they’re having a Chinese wedding ceremony in January, so he wanted to brush up on his knowledge of the language.

He said the government interviewed his instructor recently. While he understands the skepticism that’s driven the investigation, he said it’s a program filled with “wonderful people” who don’t pose a security threat.

“The percentage of people that are actually spies is ridiculously small,” he said. “It’s a huge overreaction on the government’s part, investigating all these people.”

FBI director Christopher Wray told a Senate panel in February 2018 that the bureau had concerns about the almost 100 Confucius Institutes on American college campuses.

Later that year, Congress passed legislation that included a ban on Pentagon funding for Chinese language programs at universities with Confucius Institutes, unless they received a specific waiver — pressuring some universities to shutter their institutes.

McGinnis, though, said the workers at the institute are apolitical — they focus on education, language and culture, she said, and leave the politics to others.

If the institute closes, Liu said, students will lose a valuable educational resource.

“If the students learn something about the language, about the culture, and they feel good,” she said, “that will be good for me.”