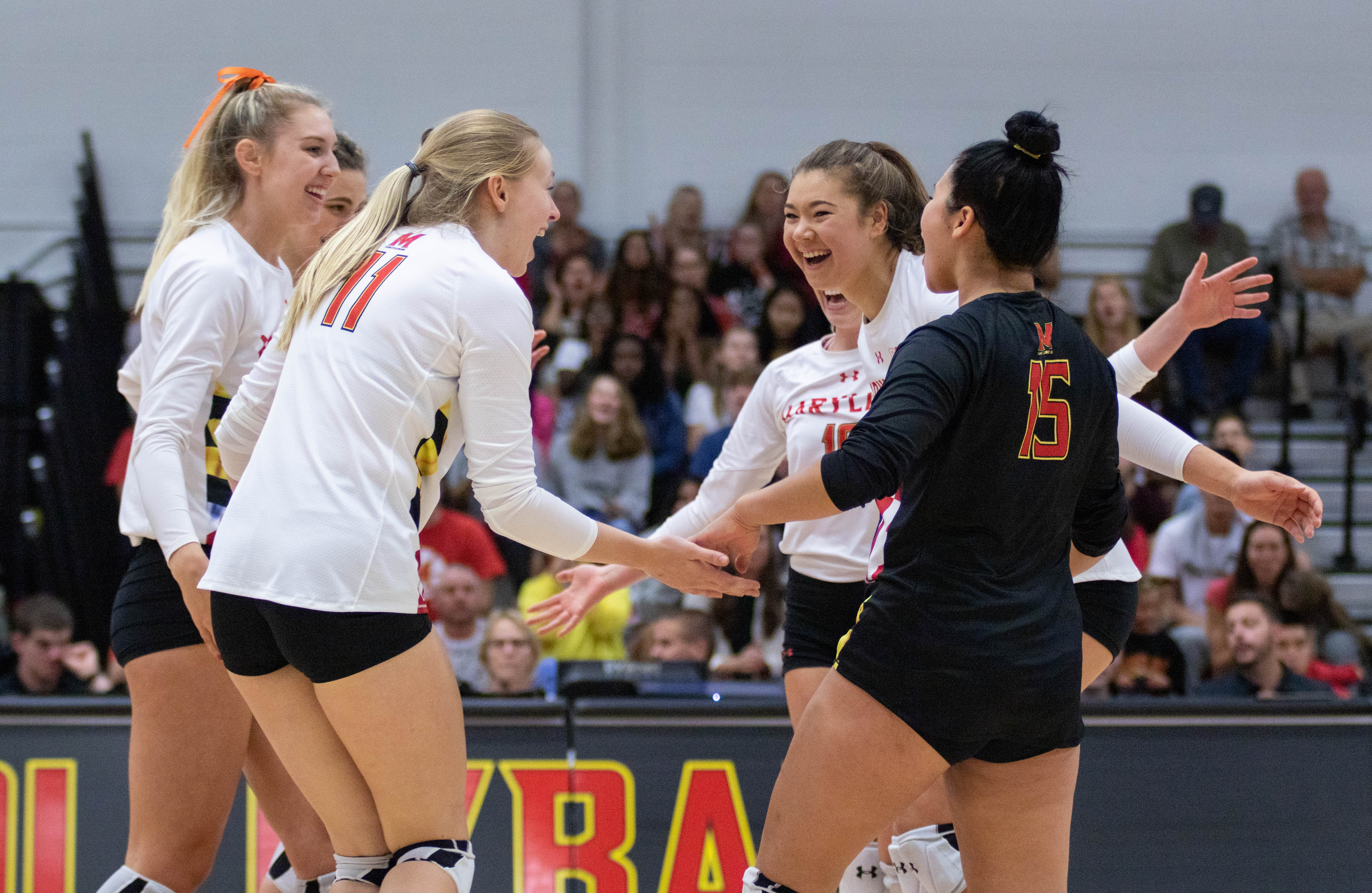 Rebekah Rath (11) celebrates a point with her Maryland volleyball teammates during a 3-0 loss to Michigan at Xfinity Center Pavilion on Oct. 4, 2019. (Julia Nikhinson/The Diamondback)

In the fourth set of Maryland volleyball’s Saturday night match against Rutgers, outside hitters Rebekah Rath and Erika Pritchard rocketed back-to-back kills, sending the Terps on their way to victory against the Scarlet Knights.

Sequential kills from Rath and Pritchard were common this weekend. The duo combined 57 kills over Maryland’s nine sets — five on Friday at Penn State and four on Saturday at Rutgers.

For a weekend featuring a lot of positives for the team — among them, winning a set on the road against the Nittany Lions for the first time since 1983 — it was Rath and Pritchard’s combination that helped lead the Terps’ attack.

“Erika and Rebekah are doing really well hitting around the blocks,” middle blocker Rainelle Jones said. “When they’re doing well, they can hit as hard as they can.”

In order for Rath and Pritchard to put up the numbers they did this weekend, the team needed the setters to distribute the ball well, keeping its opponents guessing as to which attacker would receive the set. Nicole Alford and Samantha Snyder are still splitting time as the primary setter for the Terps, and this weekend, Alford and Snyder were key figures.

Alford came out of the weekend with 46 assists, and Snyder finished the matches with 44 assists.

“They did a great job making adjustments on the fly,” coach Adam Hughes said. “The offense was able to pick up production because of that.”

Between the Penn State and Rutgers matches, Maryland’s offensive numbers surpassed the average for the season.

It was Rath and Pritchard who contributed most to those numbers. The two accounted for more than half of Maryland’s kills against the Nittany Lions and exactly half against the Scarlet Knights.

For Rath, it was the first time she produced consecutive matches with double-digit kills since mid-September. But Rath saw her success as more of a team effort than an individual exploit.

“I just think we worked really hard, and we worked well together,” Rath said. “The team helped me be really aggressive.”

Pritchard, who got off to a slow start in Big Ten play, found her groove this weekend. Both her and Hughes noted teams in the Big Ten started to focus much of their attention on stopping her after her impressive season in 2018.

In the first three matches of Big Ten play, Pritchard posted a combined 30 kills. In two matches this weekend, she totaled 33.

Hughes sees both hard work from Pritchard and accountability from her teammates contributing to her recent play.

“[Pritchard’s] locked herself in to trusting her game, and she’s become more comfortable with her process,” Hughes said. “At the same time, I think the best thing for her is that other people have stepped up. Rebekah’s done a really great job for us on the other outside position.”