Maryland volleyball takes No. 8 Penn State the distance but falls, 3-2 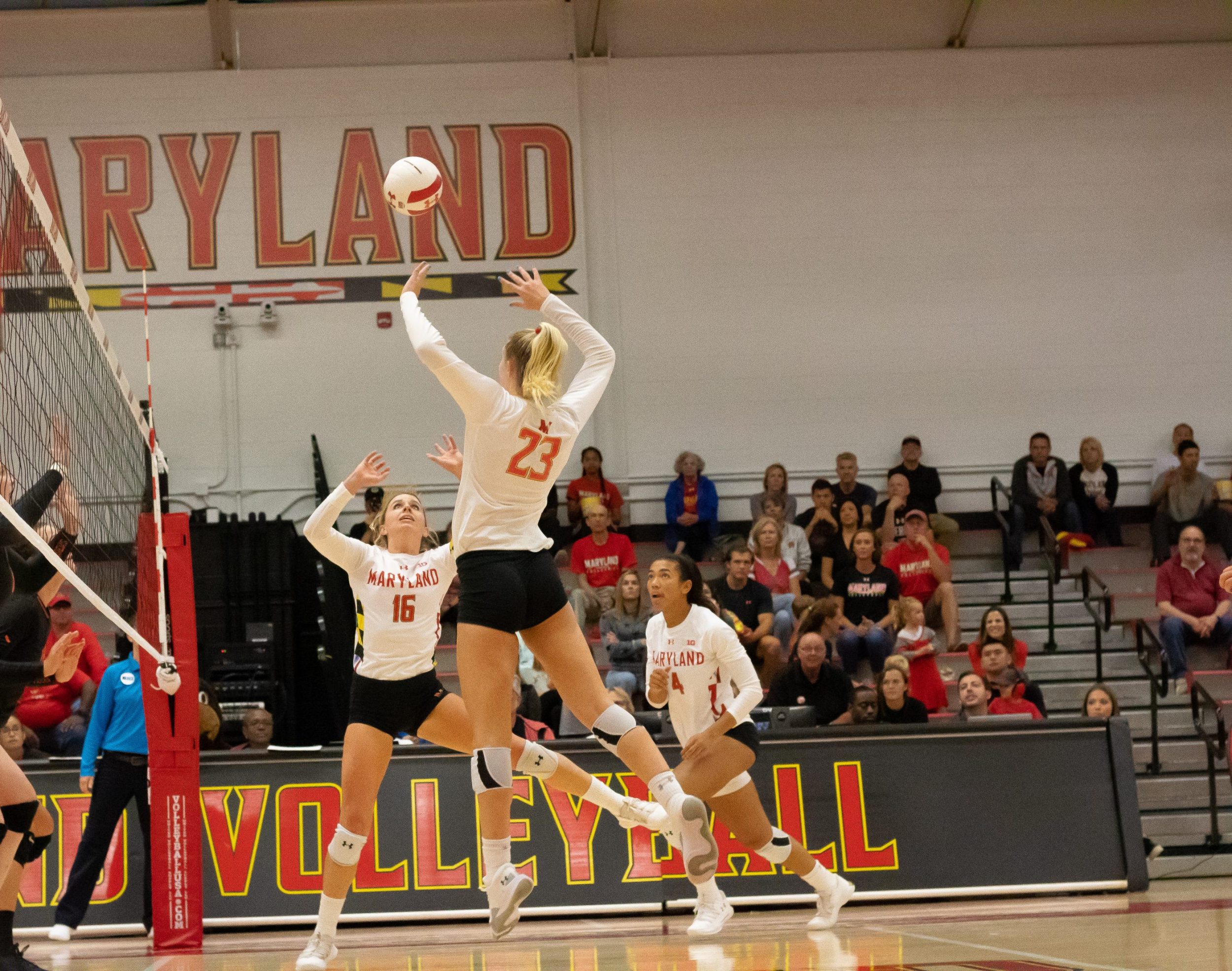 In two previous trips to State College to take on Penn State, Maryland volleyball outside hitter Erika Pritchard had dropped all six sets. She combined for just 13 kills in those lopsided matches, and the Terps reached more than 20 points just once in those six frames.

But on Friday night at the No. 8 Nittany Lions’ Rec Hall, Pritchard and Maryland bucked that trend.

“I thought we played really well out of the get-go,” coach Adam Hughes said. “We had a few opportunities late in the match, but it’s tough to get road wins like that.”

The Terps appeared to be on a mission from the first serve, with middle blocker Katie Myers notching a kill to cap the opening rally. Myers has been a focal piece of Maryland’s offense so far, and she entered the match hitting .424, finished with a hitting percentage of .435. With 12 kills Friday, Myers recorded a .435 hitting percentage.

“We saw that they weren’t ready to go from the start of the match, so we wanted to take advantage of that,” Myers said.

Sets two and three were back and forth affairs, but a few short runs from Penn State sealed both sets for the Nittany Lions. They took set two by a score of 25-20, and they were victorious in set three 25-19.

Penn State middle blockers Kaitlyn Hord and Serena Gray came into Friday’s match leading the Big Ten in hitting percentage, swinging at .460 and .429 respectively. Hord and Gray combined for 21 kills in the match, including five kills from Gray in set two.

After dropping two sets in a row, Hughes’ squad had its back against the wall in set four. The Terps controlled the set from the start, though. Jumping out to a 7-2 lead, the Terps never looked back, winning in dominant fashion, 25-14.

“We worked really well together in the fourth set,” outside hitter Rebekah Rath said. “We stayed really aggressive the whole time.”

Similar to last Saturday’s match against Michigan State, Maryland faced a win-or-go-home fourth set and prevailed to force a fifth. However, unlike last weekend, the Terps had very little success in the final set.

Back-to-back attack errors from Maryland forced Hughes to take a timeout with his team trailing 5-2. Penn State continued to apply pressure out of the timeout, going on to win the set, 15-6, and taking the match, 3-2.

“They were in system a lot more than we were in the fifth,” Hughes said. “We tried to stop their momentum, but they forced us into some tough situations and we weren’t able to recover.”

While it ended in defeat, the Terps’ performance Friday night showed a level of competitiveness that hasn’t often been found since joining the Big Ten.

“We all knew that we hadn’t played well there in the past,” Myers said. “So I think we took a really big step for the program today.”