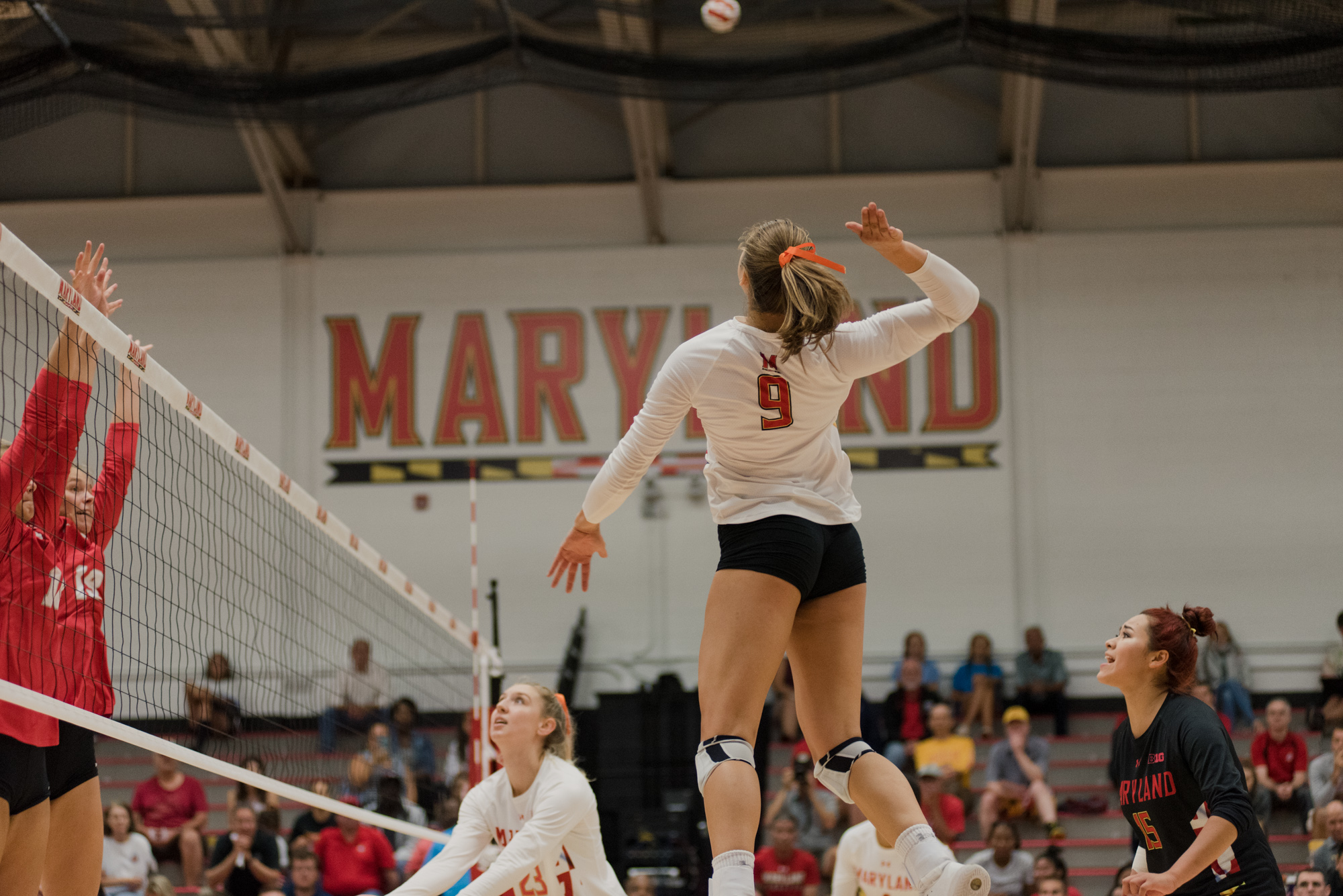 Erika Pritchard goes for a kill in Maryland volleyball's 3-1 loss to Ohio State on Sept. 25, 2019 at the Xfinity Center Pavilion. (Gabby Baniqued/The Diamondback)

A dig from Maryland volleyball libero Allegra Rivas and an assist from setter Nicole Alford set up outside hitter Rebekah Rath, who pounded the ball to the other side of the net.

While two Rutgers players rose to block the attempt, the deflection fell to their side of the court for Rath’s 10th kill of the game. It was the second time in as many nights Rath reached double-digit kills after doing so just once in four matches prior to Friday’s tight loss to Penn State.

The kill from Rath put the Terps up 12-6 in the fourth set, and they went on to allow Rutgers just three more points, as they emerged victorious in the frame, 25-11.

“I’m really proud of the group,” coach Adam Hughes said. “We didn’t get into our hotel until three o’clock in the morning, so they did a great job staying engaged.”

The Terps arrived at Rutgers late Friday night after their 3-2 loss to the No. 8 Nittany Lions. They came out flat in the first set Saturday, falling behind 4-1 after the first five serves. The rest of the frame was full of streaks, but Rutgers pulled it out in the end with three straight points.

“Staying composed and trusting our training definitely helped us stay with it after the first set,” Pritchard said.

The score of the first set flipped in set two, as Maryland evened the match with a 25-23 set win of its own. Hughes’ squad notched three service aces in the set, helping it to a close victory. Led by middle blocker Katie Myers, Maryland hit .241 in set two.

Following the five-minute break before set three, the Terps were firing on all cylinders. With his team down 8-3, Rutgers coach CJ Werneke elected to take a timeout. Out of the huddle, outside hitter Rebekah Rath sent a powerful spike over the net for the Maryland point.

“Rebekah’s getting a lot of swings in tough situations,” Hughes said. “She’s doing a really good job taking those swings and turning them into good shots.”

While the Scarlet Knights had three players with double-digit kills, they never found their groove offensively. The team came in with the lowest hitting percentage in the Big Ten, and 12 blocks from the Terps didn’t change that narrative.

Rutgers put up a fight in the third set, but the effort was squandered. A service ace from Myers gave the Terps the set 25-19, and they set themselves up to end the match in four games.

Trying to avoid its third straight five-set match, Maryland didn’t slow its roll in the fourth. The Terps were helped by 10 errors from Rutgers as they cruised to a blowout 25-11 win. Rath and Pritchard both finished with a kill percentage of .400, as Maryland closed out its road trip with a 3-1 victory.

“I really felt in rhythm with the setters,” Pritchard said, “and I felt confident taking big swings knowing that people are there to cover me.”