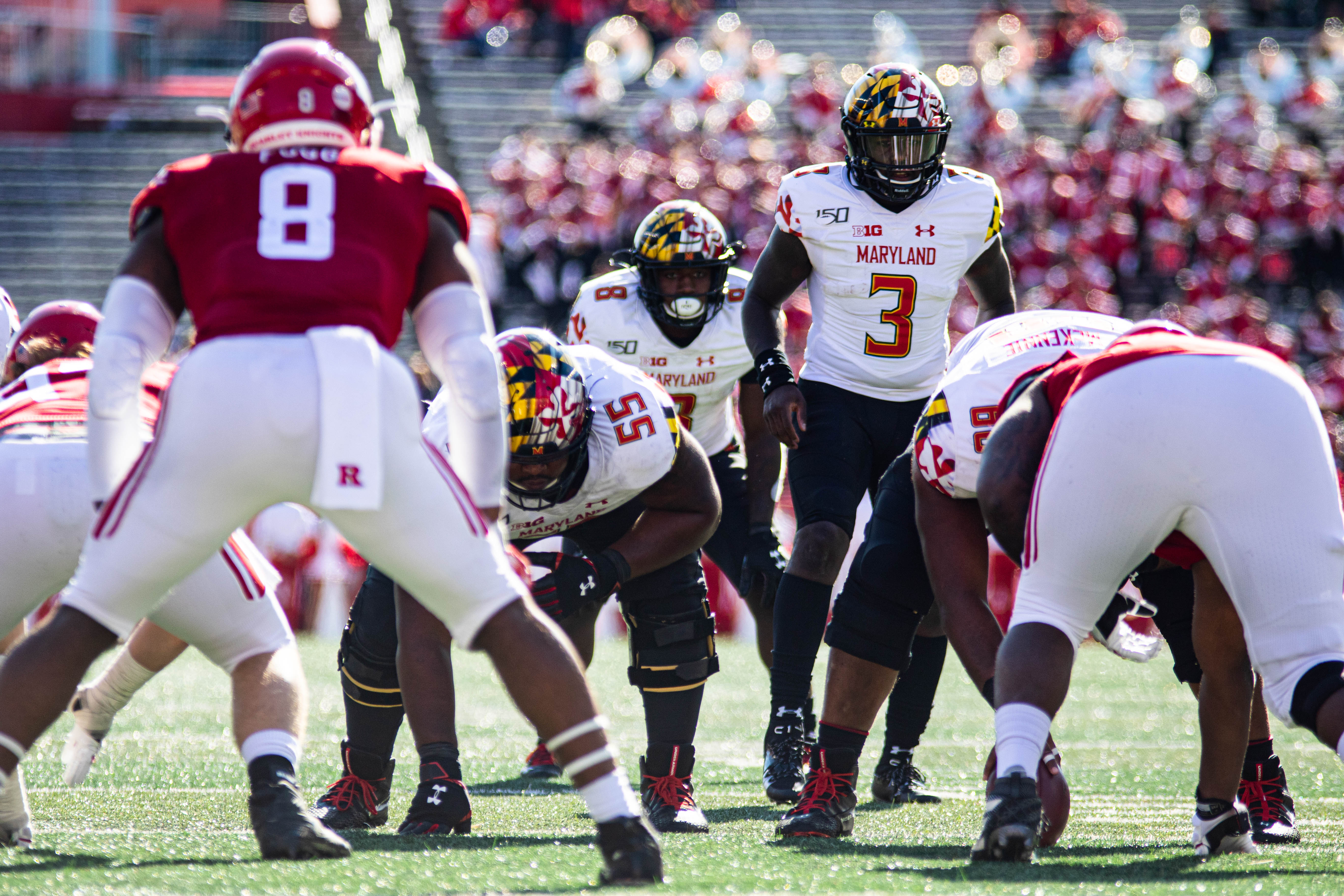 In search of points before halftime, Maryland football coach Mike Locksley called a timeout before Purdue’s ensuing punt and sent his offense back on the field with 46 seconds to see what it could muster, starting at its own 25-yard line.

The drive concluded with a touchdown, but it came in the form of a Boilermakers interception return, further separating the two teams Saturday at Ross-Ade Stadium. Quarterback Tyrrell Pigrome attempted to complete a pass to tight end Chigoziem Okonkwo. Instead, he found cornerback Cory Trice, who undercut the route, ran down the sideline and weaved through Terps for a score that concluded a miscue-ridden first half.

There were penalties — wiping away a would-be touchdown on Maryland’s first drive and pushing kicker Joseph Petrino out of field goal range late in the half — and botched coverages and third-down let-offs that allowed the Boilermakers to keep chugging downfield.

The second half was much of the same, leaving the Terps with little offensive output to show for their 403 total yards. And as Purdue quarterback Jack Plummer picked apart the defense, Maryland floundered to a 40-14 loss against a team depleted by injuries.

And while the Terps almost struck first, with Pigrome launching a 50-yard bomb to wideout Dontay Demus on the first drive, a holding penalty on running back Javon Leake negated it. Then, Maryland punted, the first of three boot-aways to open the game after drives of four plays or fewer.

The Boilermakers, meanwhile, cashed in with touchdowns on the first two drives. Plummer delivered a 23-yard strike to Bell for the opening score on 3rd-and-20. Then, facing a 3rd-and-7, running back King Doerue converted with an 18-yard catch and run before punching in a four-yard score, pinning Maryland in a two-score deficit after about eight minutes.

Locksley’s squad once more struggled to convert on third down, especially when faced with long down-and-distances. The Terps converted 5-of-21 against Temple, 4-of-15 against Penn State and 4-of-13 against Rutgers. And on Saturday, Maryland managed 4-for-14 conversions and faced an average distance of 9.6 yards.

[Read more: With little experience, Austin Fontaine is learning as he goes for Maryland football]

Even when Purdue was pushed into third-and-long situations, coach Jeff Brohm’s unit found ways to produce. Plummer completed 12 of his 14 passes on third downs.

With cornerback Marcus Lewis absent for the second straight game, redshirt freshman Vincent Flythe was burned by Wright. And even as Wright waited for Plummer’s pass to fall into his arms, safety Jordan Mosley missed the tackle. Wright ran free.

Despite a 61-yard bootleg touchdown run from Pigrome — who started in place of the injured Josh Jackson — putting Maryland within six points once more midway through the second quarter, the Boilermakers took over from there. Pigrome’s pick-six, one of two interceptions, exacerbated issues. He finished 21-for-39 with 218 yards through the air in addition to 107 with his feet.

Plummer, though, added to his standout day, finding Bell for the wideout’s second score and all but ending the contest early in the fourth quarter.

As the Big Ten slate continues and bluebloods start cropping up on the schedule, Saturday’s matchup against a team hampered by injuries offered a chance to significantly improve the Terps’ chances at reaching the six-win mark needed to secure a bowl game.

Instead, Maryland fell flat, unable to capitalize on Purdue’s key absences. In a battle of backup quarterbacks, the Boilermakers emphatically won.