With little experience, Austin Fontaine is learning as he goes for Maryland football 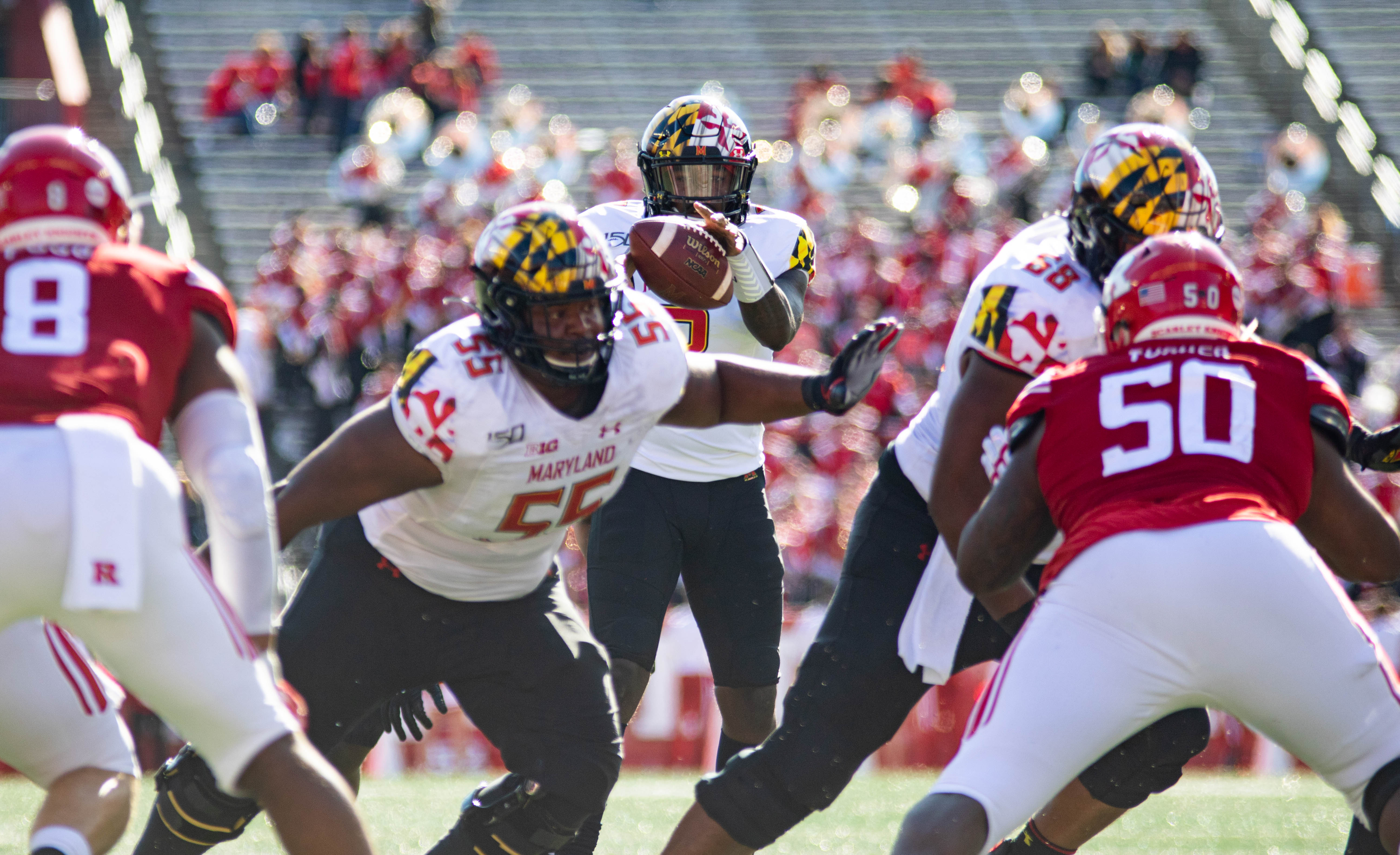 It could be during practice when Terrance Davis spies a misplaced step here, or a lean there. Or in the offensive line meeting room, or on the sideline during the game. A chance to offer a quick reminder to keep his head up during pass protection.

Wherever Davis’ wisdom comes, Austin Fontaine has grown to expect it and seek it out. He knows he’s raw at the position, and Davis was Maryland football’s most experienced offensive lineman before a sprained MCL suffered against Temple ruled him out for four to six weeks and thrust Fontaine into action.

For Fontaine, having a veteran watching over his progress has been an important part of his development. During his redshirt campaign last year, the Hyattsville native featured on the defensive line, before coach Mike Locksley asked if he could switch to the other side of the ball during spring camp to help fill holes in a thin group.

Early in his redshirt freshman year, Fontaine’s performances haven’t been perfect — Pro Football Focus credits him with allowing nine quarterback pressures, tied for second most on the team — but while the Terps shift their offensive line front due to injuries, Fontaine’s move from pass rusher to pass blocker has helped fill the void. And Davis’ tips along the way have eased the transition.

“When I’m struggling, he’s most likely the first person I’ll go to,” Fontaine said. “He’ll tell me, ‘You can’t step all the way out here, you have to step right here to him.’ … He’s always helping.”

Fontaine’s move during spring camp wasn’t his first foray onto the offensive side of the ball. He was a two-way lineman in his junior and senior years at DeMatha Catholic High School, but he signed for Maryland in 2017 as a four-star defensive tackle prospect and an Under Armour All-American. He featured in two games last year before redshirting.

When the 6-foot-3-inch lineman was approached this offseason to see if he could provide the necessary offensive line depth, he quickly got on board.

“I honestly just wanted to help everybody out,” Fontaine said. “I’m not really here to say I’m here to play one position or another. Just wanted to be a team player.”

Fontaine’s first major action came against the Owls, when Davis exited with an MCL sprain. But Fontaine also saw considerable time against Penn State and received his first career start against Rutgers, part of a makeshift line with center Johnny Jordan and right tackle Marcus Minor missing out due to injury.

Fontaine was part of a front five that featured three redshirt freshmen and an entirely new right side against the Scarlet Knights. That grouping struggled at points — quarterback Josh Jackson was sacked twice and eventually suffered a high-ankle sprain when two defenders hit him moments before halftime — but they also made adjustments, creating holes that allowed the Terps’ ball carriers to pick up 7.1 yards per rush.

“When we went into this game, who we saw Rutgers to be on film was not necessarily how they played,” Locksley said. “So with the young offensive line, I was pleased with how they took some of the adjustments we had to make on the fly.”

Much of Fontaine’s first season as a college offensive lineman has been learning on the fly, too. Davis has helped with the development, offering advice such as the importance of keeping your head up during pass protection and reminding him to stay upright rather than leaning.

Each subtlety is important at this level. In high school, Fontaine said he could get away with more imprecision. It’s not a luxury he’s afforded in the Big Ten.

When running back Anthony McFarland heard Fontaine was being shifted to the offensive line, he felt his former high school teammate would thrive wherever Locksley put him. McFarland knew Fontaine wasn’t polished — not yet, at least. But he was confident the rusher-turned-blocker would improve quickly.

With Jordan and Minor back in practice, Fontaine could have a reduced role this week. But with various maladies striking Maryland’s frontline, Fontaine has been a key piece in ensuring the Terps can still move the ball on offense.