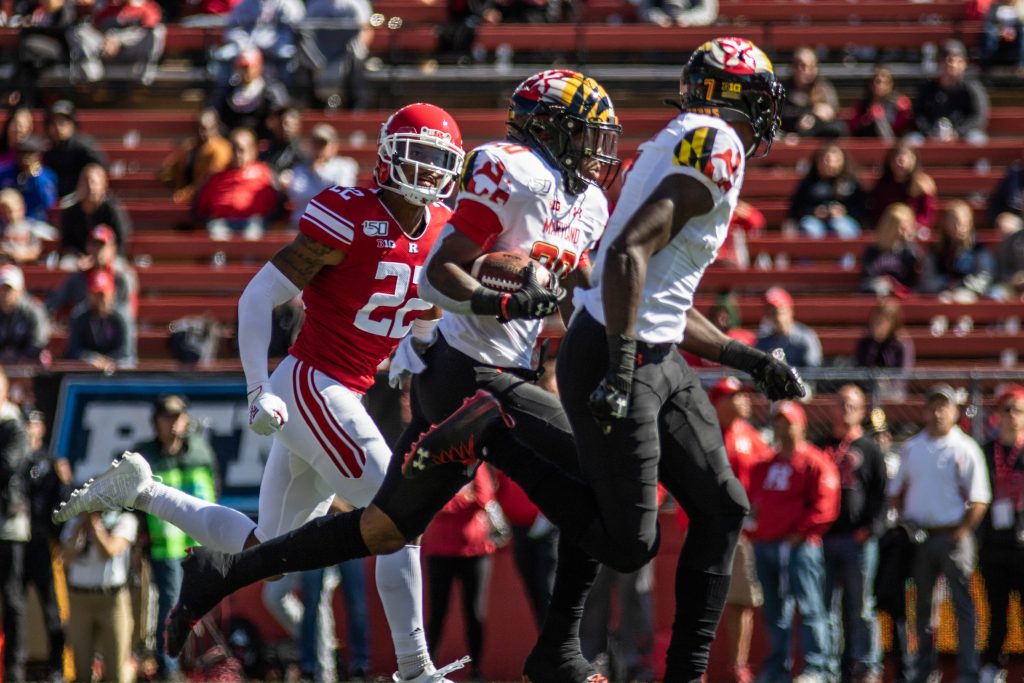 PISCATAWAY, N.J. — Maryland football won on Saturday in one of those must-have games against a program in a tailspin, against a team that fired its head coach six days prior and was without two of its primary offensive weapons as they contemplate redshirts.

But even as big play after big play materialized into an outpouring of points for the Terps, amounting into a 48-7 victory over Rutgers, a choice to push for one last score before halftime came back to haunt them. As quarterback Josh Jackson dropped back to pass with about 20 seconds remaining, two Scarlet Knights defenders converged on him.

Jackson remained on the ground for some time, nursing what appeared to be a right ankle injury. When he was helped off the field, he hardly put any weight on the leg. And then he made his way into the tunnel — not with his teammates, for the half had already expired, but on crutches and then a cart.

The blowout at SHI Stadium, the one that had so much potential to reinvigorate a squad coming off a hellacious performance last week against Penn State, was overshadowed by another injury to a starting quarterback. Jackson returned to the sideline in the third quarter in sweatpants, a boot and crutches, and coach Mike Locksley announced he suffered a high-ankle sprain.

Given Maryland’s history with injury at the position, though, there’s a collective intake of breath anytime a quarterback hits the deck. It’s practically ingrained in the psyche of Terps fans.

“It obviously gives you something to rally behind, something to play harder [for]. One of our mindsets is just, ‘Do your job,’” offensive lineman Ellis McKennie said. “So whoever’s taking the snaps, we’re there for them, but at that point in time we just had to focus back on what we were doing.”

To that point, Jackson hadn’t looked as crisp as he had over the first two weeks of the season, when he led Maryland to 142 points in shellackings over Howard and then-No. 21 Syracuse. But Jackson was manageable, his first pass going for an 80-yard touchdown to wide receiver Dontay Demus.

After the Terps (3-2, 1-1 Big Ten) realized their makeshift offensive line wasn’t opening holes or holding off a pass rush well enough, offensive coordinator Scottie Montgomery made adjustments to the blocking scheme and got creative with his running backs. Tayon Fleet-Davis snuck out of the backfield and took a short pass 50 yards, then found the endzone one play later on another reception for 23 yards.

So despite center Johnny Jordan and tackle Marcus Minor out with injuries against Rutgers (1-4, 0-3) — thrusting redshirt freshmen Spencer Anderson and Austin Fontaine into starting roles at right tackle and right guard, respectively — running backs Anthony McFarland and Javon Leake suddenly found space outside, inside and everywhere in between.

“They had to step up today,” Leake said of the young linemen. “It was definitely a challenge. Early they were getting to us, you know, with the sacks and stuff. But they calmed down a little bit, got their feet wet. The more the game went on, the more they got comfortable.”

[Read more: Rutgers doesn’t have anything to lose. For Maryland football, that could be a challenge.]

After Fleet-Davis’ touchdown catch, Leake broke off a 42-yard rushing score and McFarland punched the ball in from 2 yards out. Then, Jackson’s injury occurred.

For a team that’s suffered more than its fair share of injuries at the position, seeing Jackson down on the turf was a cause for concern. In 2017, both Tyrrell Pigrome — Jackson’s replacement Saturday — and Kasim Hill tore their ACLs. Then in 2018, Hill tore his ACL again. Jackson’s addition from Virginia Tech through the transfer portal brought the hope of stability at a position that’s hardly had it of late.

But instead of a let-off following Jackson’s ankle injury, Leake returned the second half’s opening kickoff 100 yards, McFarland scampered for an 80-yard score and Leake ran for a 12-yard touchdown — all in a dominant third quarter that included Rutgers’ second missed field goal.

“It was important to get off to a fast start,” Locksley said. “Getting the big play on the kickoff return, that ignited us.”

Against a Scarlet Knights team without quarterback Art Sitkowski and running back Raheem Blackshear — who both intend to redshirt this season — Rutgers’ breakthroughs came too infrequently. There was an elaborate flea-flicker that led to quarterback Johnny Langan’s 3-yard touchdown run, the only points the Scarlet Knights managed.

Without its playmakers, though, Rutgers often found itself swarmed by the Terps’ defense. Linebackers Ayinde Eley, Keandre Jones and Shaq Smith all posted career-high tackle counts. Saturday’s performance, the most points Maryland had scored on the road in a Big Ten game, buried the Scarlet Knights after a week full of tumult.

“We really had to deal with a lot this week,” Langan said. “It was just kind of a rush to get everything in, and I just don’t feel like we were ready this week.”

On a lesser extreme, the Terps had their own issues to deal with. Coming off the clobbering Penn State delivered last week, Maryland rebounded. When Jackson left injured Saturday, the team rallied around Pigrome. Without three starting offensive linemen, the offense made do.

So with backups on the field yet the scoreline well in his team’s favor, Pigrome found a moment to appreciate the situation. For all the potential derailers, the Terps got it done.

“You just got to smile,” Pigrome said. “Just got to be happy and smile.”