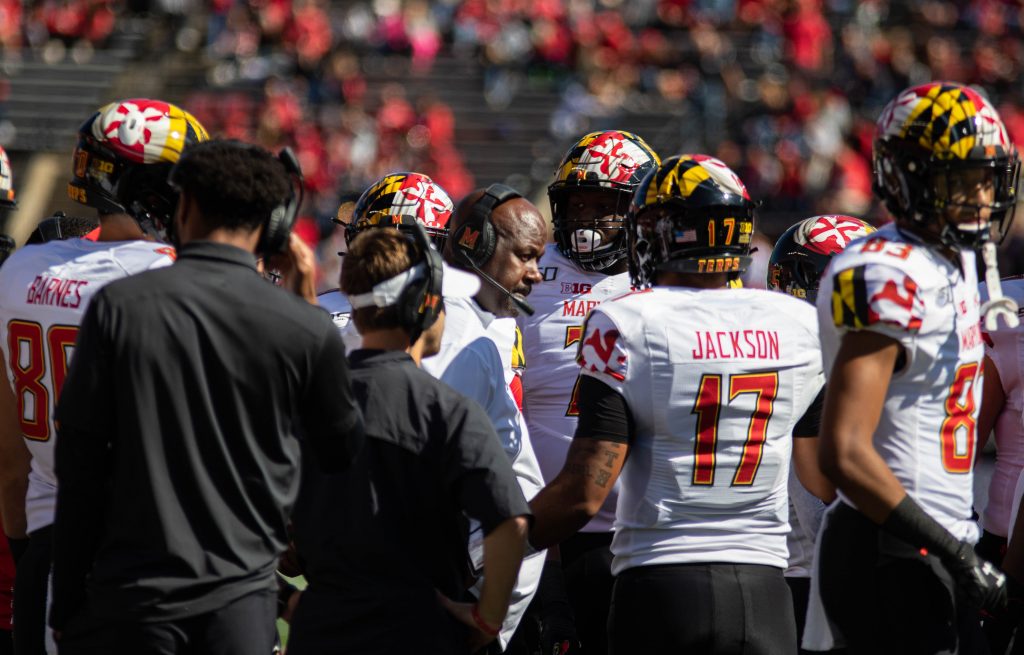 PISCATAWAY, N.J. — Maryland football quarterback Josh Jackson dropped back to pass with about 20 seconds left before halftime, looking to add another score onto an already 27-7 lead. But Jackson was hit by a Rutgers defender and remained down with what coach Mike Locksley later called a high-ankle sprain.

Two Scarlet Knights defenders hit Jackson from either side. As trainers helped him off the field, Jackson put minimal weight on the leg, and he exited the field on crutches before reaching a cart to drive the rest of the way. Jackson returned to the sideline in the third quarter out of uniform, with a boot on his foot and crutches under his arms.

Once there, his teammates patted him on the back and gave him high-fives.

“We got you, we’ve got this game. You’ll be back,” offensive lineman Ellis McKennie recalled telling Jackson. “Hopefully it’s not too serious and I wish him the best recovery for whatever it is.”

Jackson had completed 9-of-16 passes for 179 yards and two touchdowns to that point Saturday. Quarterback Tyrrell Pigrome entered and threw an incomplete pass as the half wound to a close, but finished his day 13-for-18 for 111 yards.

Following halftime, Jackson was not officially ruled out of Saturday’s contest, per a Maryland spokesperson, but he did not return.

In the buildup to Saturday, Locksley said Jackson and Pigrome each took about half of the first-team reps. So Pigrome was ready to enter in Jackson’s place.

This isn’t Pigrome’s first time heading into a game in emergency substitute duty. When Kasim Hill tore his ACL in 2018, Pigrome entered and nearly led the Terps to a comeback against Indiana.

“I’ve always got to be prepared, you know what I’m saying? Like I was last year,” Pigrome said. “I always try to prepare myself like I’m the starter.”

In his four games this year, Jackson completed 50.4 percent of his passes for 789 yards, eight touchdowns and four interceptions. His first pass Saturday went for 80 yards to wide receiver Dontay Demus.

The high-ankle sprain is a less severe injury than some of the ones that have sidelined Terps quarterbacks in the past, but it puts Jackson’s availability up in the air for when his team travels to Purdue next week.