Route 1 is only getting more dangerous. Its speed limit should stay low. 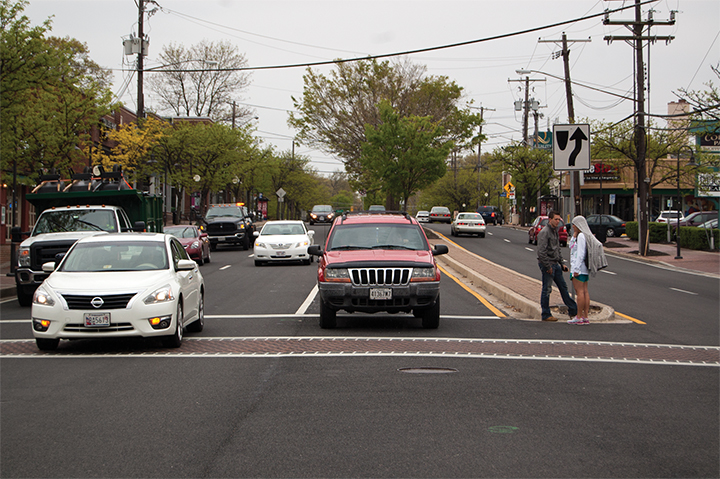 Knox Road and Route 1 are some of the major roads near campus. (File Photo/ The Diamondback)

It’s no secret College Park can be hazardous for pedestrians. Over the past two and a half years, there have been at least five pedestrians struck by vehicles in two separate locations on Route 1, one of which borders the University of Maryland’s campus.

Pedestrian deaths and injuries are too common in this city, for a variety of reasons. While the amount of foot traffic in this town will only increase as the University of Maryland continues to expand, the Maryland State Highway Administration has rightly tried to mitigate the danger for pedestrians by lowering speed limits on Route 1.

The Diamondback recently reported that, in the past fiscal year, speeding citations from speed cameras brought in over $900,000 in net revenue for the city. While some may feel the 25 mph speed limit on parts of Baltimore Avenue is too slow and speed citations are a pain to pay — especially as college students — these measures are important for pedestrian safety.

Given this is a university, there’s obviously a lot of foot traffic on and around campus. Many students don’t drive between the campus and locations on Route 1, especially with the lack of parking and the number of other, more sustainable and convenient transportation options. I try my best to never jaywalk across Route 1, but I’ve seen many students start crossing before the crosswalk sign changes, because they know the order in which the traffic lights change.

However, like at any crosswalk, there’s the possibility of a car running a red light or making a turn without seeing a pedestrian trying to cross. A lower speed limit decreases the odds of a collision, because it’s easier for a driver to slow down or stop their car without injuring themselves or others.

The AAA Foundation for Traffic Safety has shown a pedestrian struck by a vehicle moving 25 mph has a 25 percent risk of sustaining a serious or fatal injury, while that risk leaps to 50 percent for a vehicle driving 33 mph. The speed limit on Route 1 between Guilford and Berwyn roads used to be 30 mph until 2014, when the SHA changed it after three pedestrian deaths.

Another reason for a 25 mph speed limit on parts of Route 1 is the introduction of almost 300 rentable scooters and bikes to this campus. As I wrote in a previous column, bicycles and scooters are supposed to ride on the road; however, many do not, especially on campus. This further increases the need for a lower speed limit on parts of Route 1 — a collision between a car and an electric scooter, for example, can be just as dangerous as a collision with a pedestrian.

Additionally, University Police made 72 DUI/DWI arrests within the first three months of 2019, more than a 25 percent increase from the same period in 2018. At night especially, a lower speed limit may prevent a pedestrian from being hit by a drunk driver, or reduce the level of injury if they are hit.

Ultimately, the lower speed limit is a necessity for Route 1 and other roads that surround the campus. While speed cameras may be annoying and receiving a speeding ticket is definitely not fun, they’re there for a purpose. Pedestrians on this campus are at risk, even if they are only crossing when and where they’re allowed. Speed cameras are designed to force people to follow the speed limit, making College Park a safer place for everyone.