Construction is underway for two new dorms on UMD’s campus 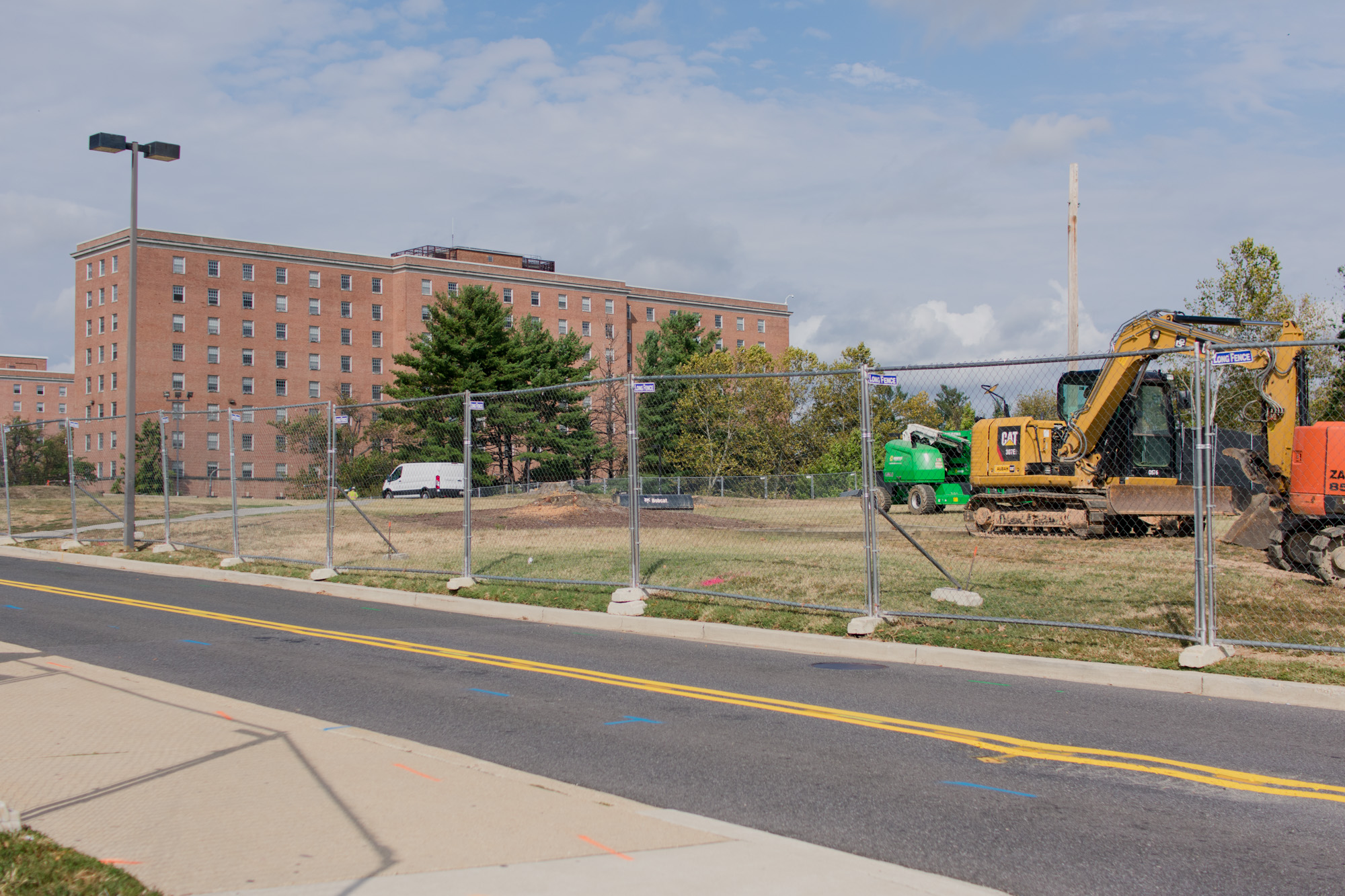 Fences have been put up as construction for two new dorms and a dining hall begins on North Campus. (Gabby Baniqued/The Diamondback)

After being postponed for more than a month, construction on two new dorms and a dining hall began Sept. 30 on North Campus.

The project was supposed to start earlier this year, but Facilities Management decided to wait until things had “settled down” after fall move-in, planning and construction director Bill Olen said.

Over the next month, construction workers will remove sidewalks and tear down the Varsity Practice Fields, where the new dining hall and one of the dorms will be located, Olen said.

The adjacent Farm Drive will be relocated around winter break, Olen wrote in an email. It will eventually be connected to the parking lot on the west side of Cumberland Hall, creating a loop around the Cambridge Community.

The Varsity Practice Fields were the practice location for the men’s soccer team and other teams. Now, they will use Cole Field House to practice.

Olen said the project is expected to be completed in summer 2021, and the dining hall will be finished after the residence halls. The dorm project will have a budget of $97 million, Olen said, and the dining hall doesn’t have an exact cost yet, since a bidder hasn’t been finalized.

The new dorms — the first since Prince Frederick Hall opened in 2014 — are part of Resident Life’s 15-year housing plan from 2014. There will be 902 beds in the new halls, department spokesperson Tracy Kiras said.

Students in the University Honors program — the largest Living Learning Program in the Honors College — will be among those living in the new dorms.

There will be a space in the new dining facility for honors seminars, offices and a student lounge. The seminar rooms will have retractable walls, allowing for bigger spaces if necessary, program director Stephan Blatti said.

These changes come as the Honors program undergoes changes to its curriculum so it can be more cohesive. Right now, students and faculty are scattered across different buildings, and the new facility will allow the program to integrate its future “much more seamlessly,” Blatti said.

“This is really a big step forward for the program to have a kind of home,” Blatti said. “It’s gonna be a dramatic improvement, and it’ll give us a chance to do some dynamic, innovative things that we haven’t been able to do in the past.”

Last semester, the Residence Hall Association advisory board gave the department feedback on the project, president Emily Berry said. RHA ensured student concerns would be heard throughout the process and the buildings would be accessible to all students, Berry said.

“I’m excited,” said Berry, a junior economics and government and politics major, said. “Of course, there’s going to be problems that arise from it, just given the fact that students are used to walking through that area to get to class. But it seems like they’re taking all of that into account.”

The new dining hall will replace the “very old” North Campus Dining Hall, dining services spokesperson Bart Hipple said. It’s the first time a new dining hall has been built since around the 1960s, he said.

Hipple said they’re trying to make food options “more flexible” for students, such as by including an all-day breakfast station. The new facility will also have big windows and more comfortable seating.

“It’s such an exciting project, it’s tough to figure out what the most exciting thing is,” Hipple said. “The flow, the feeling and the ambience will be better.”