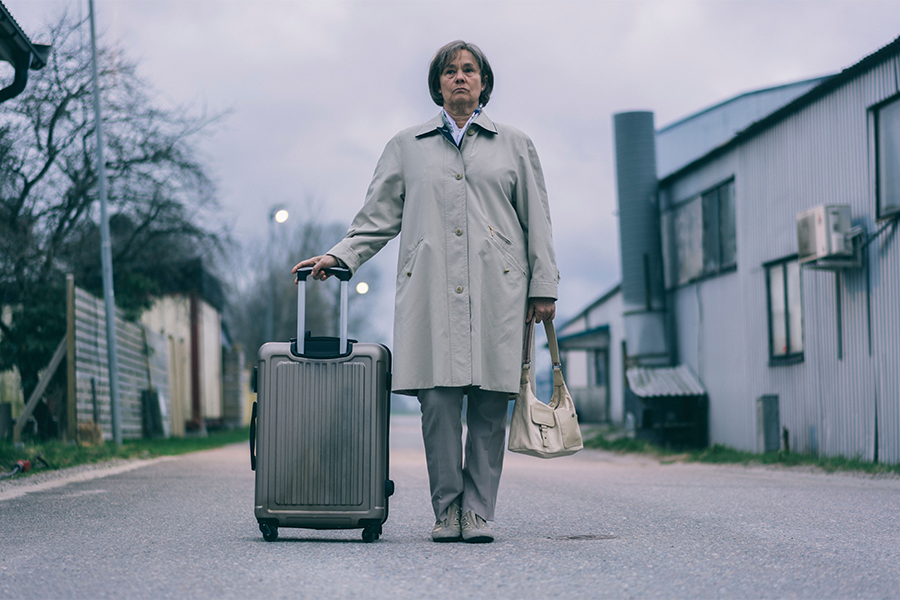 'Britt-Marie Was Here' shows a woman who upends her life and lands in the rundown town of Borg, Sweden (Photo courtesy of Cohen Media Group).

Britt-Marie Was Here does not span a huge period of time. It spans a few weeks. But it’s a movie that is as deeply moving as it is slow-paced.

Britt-Marie is a woman of strict order and composure. She follows her rules of life – including leaving her husband when he is unfaithful. After a lifetime of picking up after others, she ends up in the small, rundown town of Borg, Sweden, which has a dilapidated youth center and a pathetic soccer team.

The film starts off slow, because it is difficult to show a woman who can’t show herself to the world, or even to herself. The screenplay must find a way to make this connectable, to show the humanity of a woman who lives every day in a slow, boring dream, with few choices to make and little agency to make them.

Because she reveals very little of herself through words and actions, narration shows many of her inner thoughts, sounding like diary entries from a woman with no direction or confidence.

As Britt-Marie takes on the impossible task of coaching a ragtag team of ten-year-olds. She must move past treating something like a household chore to check off and remember how to dream.

Britt-Marie is presented to us as a woman who relies on order to make sense of her humdrum, uneventful life. In reality, her life has been painful — and from the conception of her family’s trauma, she was the one to wait on others, to keep a routine, to keep everyone together.

“So I cleaned and hoped someone would notice me,” she said of her life. She was another good daughter to make coffee and breakfast, another wife to scrub the floor and wash the windows, to search for perfume and lipstick on her absent husband’s shirt collars and then press them clean.

Britt-Marie Was Here paints a version of life that reminds us a woman can always begin again — or simply begin — with gray hair, wrinkled skin and an attitude. Although we don’t get to know any of our other characters nearly as much as we would like, it’s clear they’re all as lovable and passionate as they are rough around the edges.

I wanted to go on living in Borg. I wanted to know more about the choices Britt-Marie has freed herself to make. Britt-Marie Was Here is a vision, and it’s a story worth seeing.