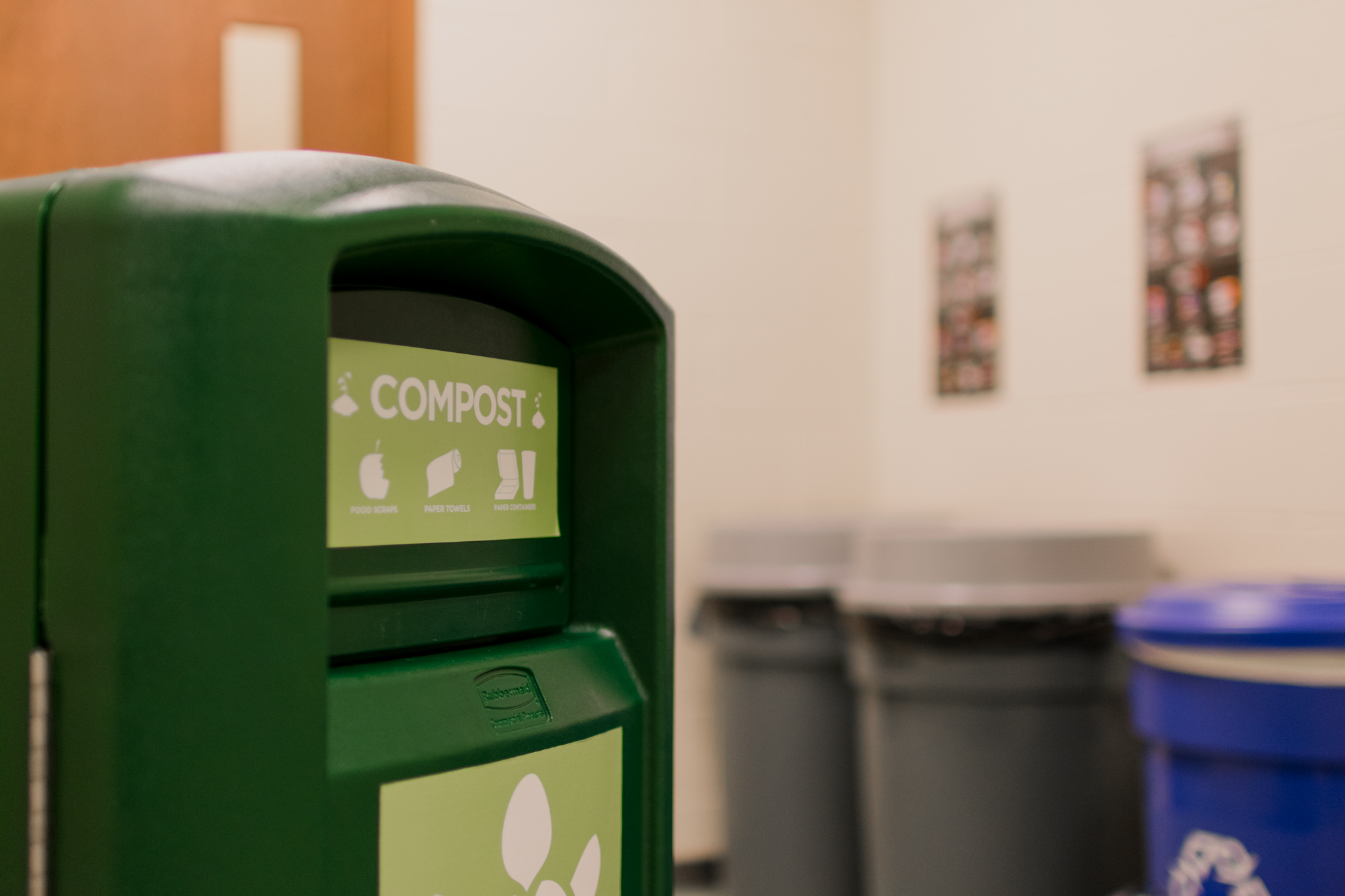 A compost bin can be found on every floor in Prince Frederick Hall. (Gabby Baniqued/The Diamondback)

Composting is now easier for students living in the Leonardtown and South Hill communities at the University of Maryland.

Since the start of the school year, two new compost drop-off bins have been added, in the Annapolis Hall lobby and the Leonardtown Community Center. Their addition represents an expansion of the university’s push for more on-campus composting, which began in 2012. As of this fall, 32 buildings on this campus have composting bins.

The Residence Hall Association’s sustainability committee has been pushing the university to expand its composting program in dorms since 2017, said RHA vice president Julian Chiveral. The committee spoke with the Department of Resident Life’s coordinator for sustainability programs, Lisa Alexander, and the director of Residential Facilities at the time, Jon Dooley.

Chiveral said he’s excited about the expansion of composting bins in dorms.

The expansion of the composting program comes in addition to other sustainability initiatives at this university, Alexander said. Since she started her position in the last academic year, she said she has worked to create better signage to guide students on how to sort their waste into recycling, trash and compost.

Last year, the university composted 1,134 pounds of food scraps — more than twice as much as it composted in the first year of its program.

The school’s compost is processed at a composting facility in Prince George’s County and turned into natural fertilizer. Some of that fertilizer is sent to Terp Farm, a produce farm 15 miles from the campus dedicated to sustainable farming practices. Produce grown there is served at on-campus dining halls and Green Tidings, the university’s food truck. Some is also donated to food-insecure members of the campus and College Park communities.

To drop off compost at the new bins in Annapolis Hall and the Leonardtown Community Center, students must register by emailing Alexander or Adrienne Small, Facilities Management’s recycling coordinator. When they register, students can pick up a five-pound tub to store their compost throughout the week before dumping it.

Some students, such as Leonardtown resident Eva Sanchez, have already taken advantage of the new program. She picked up a composting bin in September, and said she and her roommates often use it.

[Read more: “Continuing on the legacy”: The Maryland Food Co-op lives on as a pop-up thrift store]

Sara Walton, another Leonardtown resident, said she hasn’t picked up a compost bin. She agrees that the composting program is a good idea, but said it might be difficult to get into the rhythm of regularly dumping compost.

“I think it will take some time to get into the routine, or it’ll be something I always forget about,” she said.

Derek Schoenberger, a junior computer science and mechanical engineering major who lives in South Campus Commons, wishes there was a compost station in his building, rather than in Annapolis Hall.

“I feel like people aren’t really compelled to go take their compost somewhere else if they have to walk a long way,” Schoenberger said.

However, because the South Campus Commons and Courtyards waste management is not run by the campus facilities, Resident Life and RHA do not have the ability to place composting bins in the buildings, said Chiveral.

In the future, Alexander says educating students on how to properly compost will be key to promoting sustainability at the university.

“Continuing to make sure that training and communication and … our signage is fresh, and it’s actually helpful to students, will be important,” she said.