“Continuing on the legacy”: The Maryland Food Co-op lives on as a pop-up thrift store 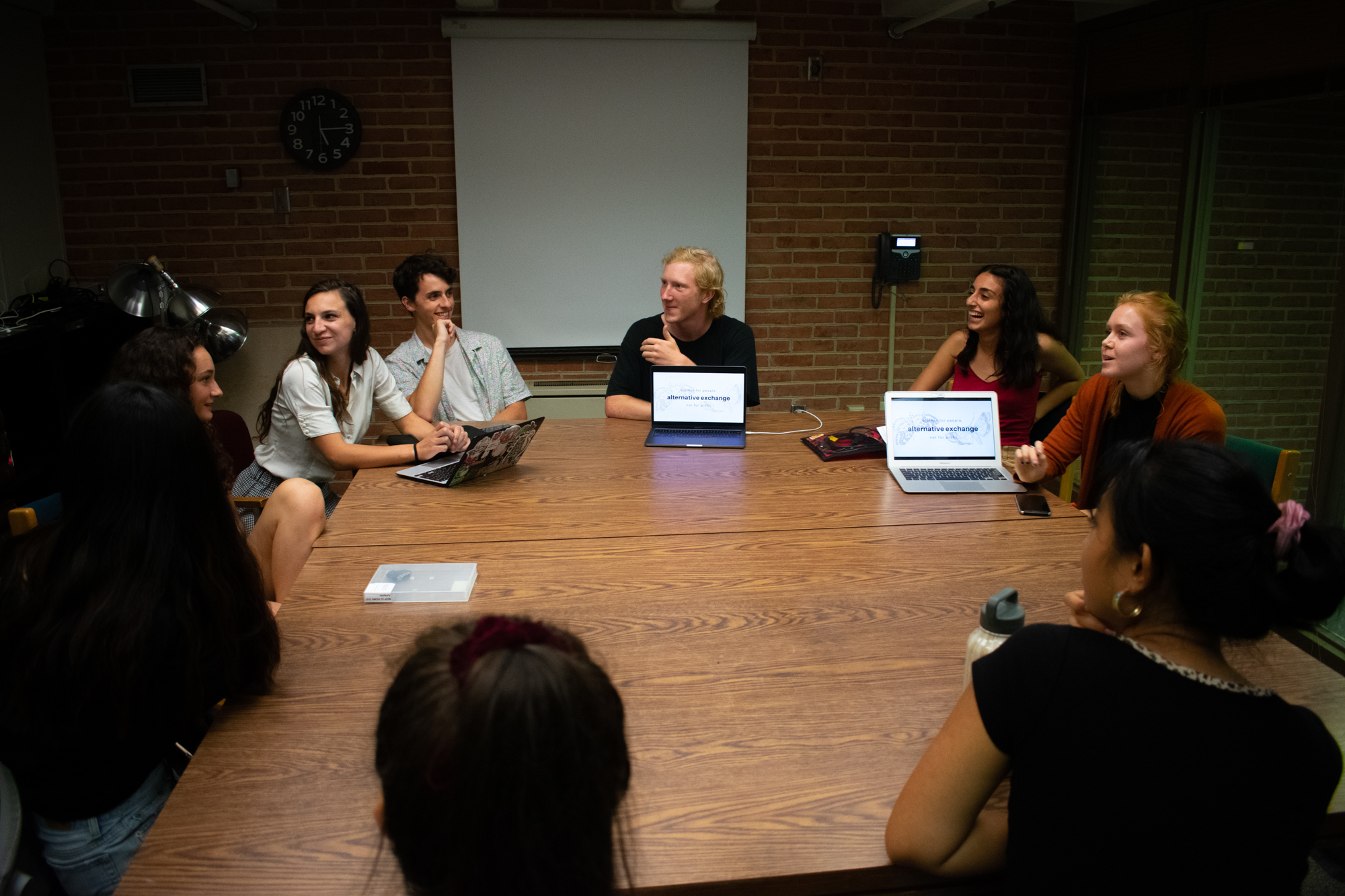 Two former worker-owners from the Maryland Food Co-op, and some friends, have started up a cooperatively-owned thrift shop. (Elliot Scarangello/The Diamondback)

There may be no more falafel balls frying in the basement of Stamp Student Union, after the Maryland Food Co-op shuttered at the end of last semester.

But the flavor of a cooperative business model lives on at the University of Maryland — in the form of embroidered vests and a The Cat in the Hat sweatshirt.

Two of the Co-op’s former worker-owners, along with some of their friends, have launched a cooperatively-owned, pop-up thrift store.

The thrift store, called Alternative Exchange, aims to promote worker empowerment and encourages buying clothes secondhand in the face of the fast fashion industry, which is characterized by trend-focused, short-lived clothing.

Today’s clothing industry not only exploits workers, but is also a drain on natural resources, said store worker-owner Emily Fox.

“We’re about to hit this environmental crisis and we’re producing so much and wasting so much energy,” the sophomore philosophy, politics and economics major said.

[Read more: Despite the best efforts of its workers, the Maryland Food Co-op is closed]

At Alternative Exchange, customers can buy clothing or swap out an old piece of their own for one of the pop-up’s secondhand garments. Worker-owners are planning to donate the unsold clothes to a textile recycling service, Fox said.

The pop-up has already been a hit, worker-owner Conor James said. It was launched at the First Look Fair last month, and by the event’s second day, James said students were bringing trash bags filled with old clothes to exchange.

There are a number of thrift stores close to the campus, such as Value Village and Uptown Cheapskate. But James said a “cycle of moving in and moving out” is still prevalent at the university, with students getting rid of clothes as the seasons change.

“There is already enough clothing on the planet that like everyone could just be swapping around and staying stylish,” said James, a senior English major.

Tossing clothes after a few uses takes a toll on the environment, Fox said. It takes about 7,500 liters of water to make a single pair of jeans, according to the United Nations — that’s equivalent to the amount of water a person drinks over the course of seven years.

Greenhouse gas emissions from the clothing industry could also increase by nearly 50 percent by 2030 if operations continue as they are now, according to UN Environment, a global program focused on sustainable development and climate change, among other environmental issues.

[Read more: “This is not the end”: UMD community members hold rally to save the Co-op]

Julie Gabrielli, a lecturer in the university’s architecture school, said some of the clothing in department stores are dyed with toxic chemicals that can pollute the waterways, as well.

Gabrielli, who has a background in sustainable design, compared wearing second-hand clothing to the three Rs: reduce, reuse and recycle.

“Recycling is almost like a last resort,” she said. “Reducing what you buy and then reusing stuff or swapping — it’s so much more fun.”

Rohit Mandavia, a senior computer science and mechanical engineering major who had never gone to the Maryland Food Co-op, said he’d probably stop by a thrift pop-up on the mall if he wasn’t rushing to class. But he doesn’t know if he’d buy anything.

“I think it would be cool,” he said. “I feel like people could go in and buy things that they wouldn’t normally buy.”

Alternative Exchange will host another event on McKeldin Mall on Oct. 10. Though the shop is operating with a pop-up model for now, Fox and James envision a retail space for the co-op in the future.

The space would be like a “community center,” with a coffee bar and a used book station, James said. He said that they’re looking at spaces like the LEAFhouse on North Campus, as well as more central areas in academic buildings.

“We’re just we’re sort of driven by this vision of having a cooperative business in College Park and continuing on the legacy of the Maryland Food Co-op,” Fox said.